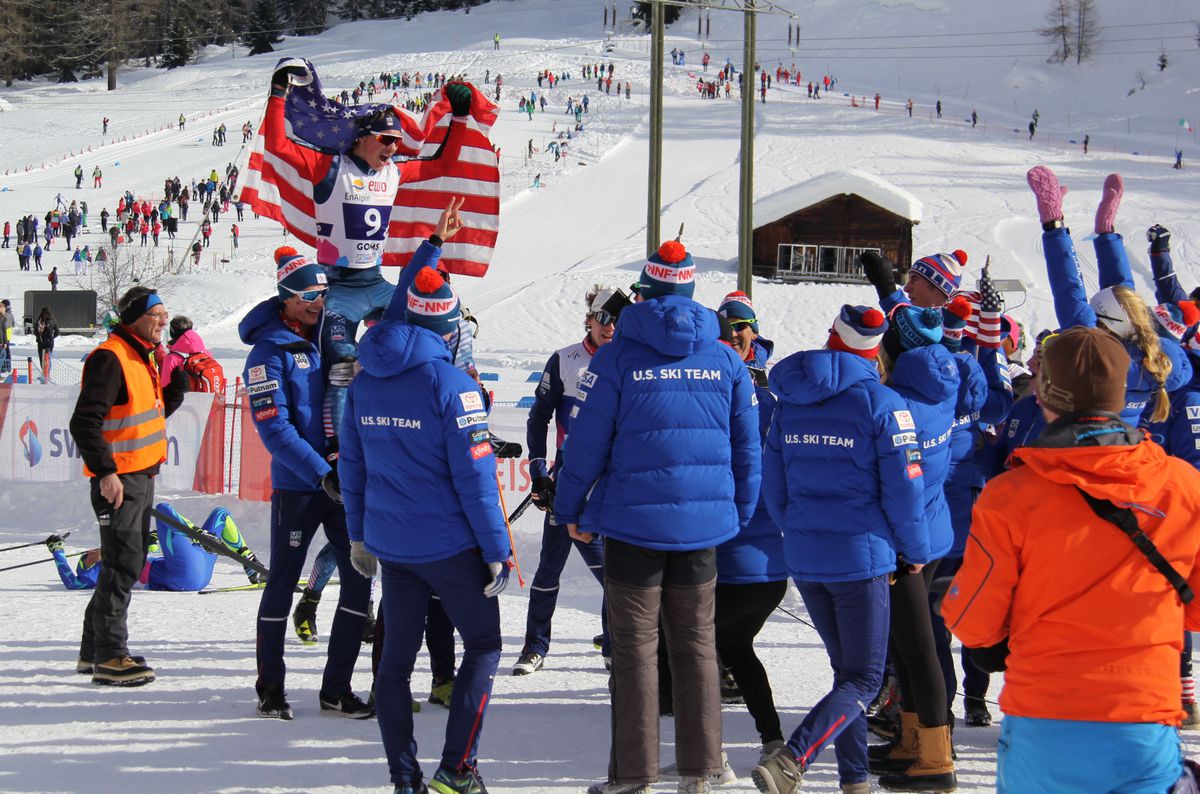 Gus Schumacher is hoisted up with the American Flag after the U.S. World Junior’s relay team of Luke Jager, Hunter Wonders, Schumacher and Ben Ogden, placed second in the world championships on Saturday in Goms, Switzerland. (Photo by Glenn Gellert)

Gus Schumacher is hoisted up with the American Flag after the U.S. World Junior’s relay team of Luke Jager, Hunter Wonders, Schumacher and Ben Ogden, placed second in the world championships on Saturday in Goms, Switzerland. (Photo by Glenn Gellert)

It was a familiar enough scene: Gus Schumacher, Luke Jager and Hunter Wonders climbing a podium to receive awards after a cross-country ski race.

It happened last season when they finished 1-2-3 in the Skimeister competition at the Alaska high school ski championships. It's happened at other races too.

But when it happened Saturday in Goms, Switzerland, the moment was historic, and a bit stunning.

For the first time, American boys — three of them Alaskans — earned medals at the World Junior Championships.

Propelled by Schumacher's monumental anchor leg, the United States captured the silver medal in the 4×5-kilometer relay race to cap an epic week for the U.S. Ski Team.

"It is unbelievable!" Wonders said. "The night before we were making jokes that all the stars would have to align and that's exactly what happened. It feels amazing to be part of a big step in improving our men's skiing."

The United States had never won a medal at the annual championships for skiers 20 and younger until last season, when it won two. This year, the Americans won three medals — two by UAA sophomore Hailey Swirbul, plus Saturday's shocker in the boys relay.

Schumacher was nothing short of sensational in lifting the American team — which also included Vermont's Ben Ogden — from fourth place to second place.

"The feelings were incredible — the best I've ever had in a race," Schumacher said by email. "It was super cool to do it with 2 other Alaskans who I have trained with and raced against for so many years at home."

He passed France, then Russia, and nearly caught Norway's Joergen Lippert, who hung on to win.

"In the closing minutes of the race I knew I could get a medal, but it wasn't until the final sprint that I could see silver in reach," Schumacher said. "I focused on really holding steady for the first 2k, then starting to push more, and I was able to catch that lead pack and then recover with them for the last sprint, which did end up really hurting. On the last hill, I knew I was pretty clear of France, but wasn't really thinking passing Russia or Norway was super probable.

"By the time I got through the downhill corner, however, I was closing fast on the Russian and realized I was right there. I popped around the last corner and was almost even with Russia, then after a few seconds of sprinting I pulled ahead and he slowed down and I knew I had it."

In the women's relay, Germany captured the gold medal and the United States — with three Alaskans on the team — placed eighth, more than a minute off the winning pace.

Swirbul, a sophomore from Colorado who earlier in the week won a silver medal in the 5K classic and a bronze in the skiathon, registered the second-fastest time of the relay's second leg.

In the boys relay, Jager opened with the sixth-fastest scramble leg. Odgen moved the team to fourth place in the second leg and Wonders maintained that position in the third leg.

The Alaskans ski for three different high schools and two different clubs — Schumacher is with the Alaska Winter Stars and Service High, Jager is with Alaska Pacific University and West High and Wonders is with APU and South High. But they are part of a close-knit group of athletes who share huge ambitions and a commitment to training.

Jager called the silver medal "a dream this group of dudes has had for a long time."

"Hunter, Gus and I were fighting for a state championship last year, and this year to be side by side fighting for world (championship) medals with them was so sick," he said via Twitter direct message. "We've all been in Anchorage training and dreaming of days like this since we were in elementary school. To see this happen today was really emotional for us for that reason.

"Really a testament to the Anchorage ski community. We are all so thankful for every person who has helped us get to where we are. Not just the U.S., but Anchorage is making itself known as not just a national, but international ski capital."