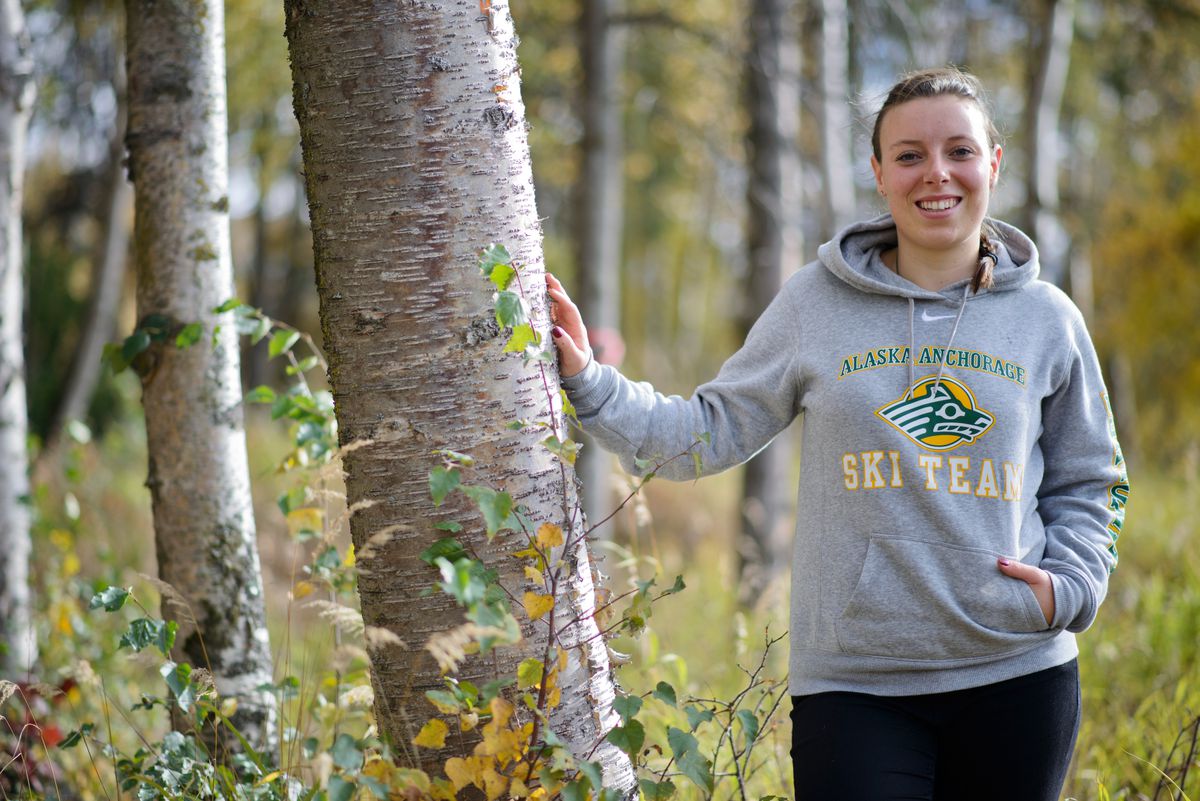 UAA alpine skier Charley Field always wanted to come to Alaska, and she landed a scholarship at UAA. She keeps a 3.86 GPA as a junior, but remaining at UAA may hinge on whether the school has a ski team after this school year. (Marc Lester / Alaska Dispatch News)

UAA alpine skier Charley Field always wanted to come to Alaska, and she landed a scholarship at UAA. She keeps a 3.86 GPA as a junior, but remaining at UAA may hinge on whether the school has a ski team after this school year. (Marc Lester / Alaska Dispatch News)

Growing up as an alpine skier in Pemberton, British Columbia, about a half-hour north of the ski venue for the 2010 Winter Olympics, Charley Field entertained visions of Alaska. She thinks every skier harbors that dream.

Field took a year off after graduating high school and skied for her provincial team on the Nor-Am circuit, one step below the World Cup. That's where she crossed paths with University of Alaska Anchorage ski coach Sparky Anderson, who offered her the scholarship that fed her dream.

Since arriving at UAA in the fall of 2014, Field has flourished athletically and academically. She has twice qualified for the NCAA Championships and delivered a 3.86 grade-point average.

Along the way, Alaska sunk its hooks in her.

"When I come up here every year, I'm excited to come back,'' she said. "That tells me I've made it my home a little bit.''

[Related: Pursuit of recruits a tricky enterprise for coaches of endangered sports]

Yet, like many Seawolves athletes these days, Field wonders how much longer UAA and Anchorage will serve as home.

At UAA, the three sports most in danger of being eliminated are hockey, skiing and gymnastics, which all compete at the NCAA Division I level in an athletic program that otherwise competes in Division II.

"Yes, a lot of us are worried,'' Field said. "To be honest, if my sport gets killed, I'd probably have to leave because I can't afford school here on my own.''

The stakes: For some, survival

In August, UA released its Strategic Pathways report, an effort to cutting costs. The options presented were as jarring for UAA athletics as a bone-rattling check in hockey.

And with the Strategic Pathways goal of slashing general funding for sports by 50 percent by 2020 and completely by 2025, more cuts appear certain at UAA and UAF. UAA's athletic budget this school year is $10.36 million; at UAF, $5.48 million.

Strategic Pathways furnished three cost-cutting options for the future of athletics at the two universities. "All are difficult to accomplish,'' the report noted. And two of them appear to doom Seawolves hockey, skiing and gymnastics after the current school year.

Option No. 1 calls for the elimination of all sports at either UAA or UAF, or at both schools. Eliminating all sports would make Alaska the only state without college sports. At last month's University of Alaska Regents meeting, the board told Johnsen to avoid this path.

Option No. 2 theorizes a consortium model in which the 23 combined teams at UAA and UAF – 13 at UAA, 10 at UAF – would be reduced to as few as 10 sports, some of them based at UAA, some at UAF. That option, though, would require unprecedented approval from the NCAA, which has never granted a consortium arrangement to two schools as geographically separated as UAA and UAF.

Option No. 3 envisions continued but reduced sports at UAA and UAF, with both programs competing solely in the Division II Great Northwest Athletic Conference, where both the Seawolves and Nanooks currently compete in several sports.

At UAA, Option No. 3 would kill hockey, by far the school's most expensive sport with a $1.35 million budget this school year, and replace it with men's and women's soccer. Gymnastics and men's and women's skiing would also be eliminated.

Those changes would reduce costs for UAA and UAF sports, yet still keep the schools in compliance with the NCAA's "10-team rule," which mandates the minimum number of sports for schools to compete in Division II.  There is no hockey, skiing, gymnastics or riflery at the Division II level.

UA associate counsel Michael O'Brien has been working to explore options with the NCAA. He said he's been helped by outside counsel with vast experience navigating the NCAA.

O'Brien said UA is inquiring about possible waivers to Division II's 10-team rule and also whether the consortium model has any chance of NCAA approval.

Waivers are not unusual. UAF currently has a waiver because it does not sponsor a spring sport. UAA a decade ago had a similar waiver before it began its outdoor track and field program.

O'Brien said UA has not yet determined what type of waiver it will seek but expects later this month to submit a waiver request to the NCAA's Membership Committee, which is scheduled to meet in mid-November.

UA is simultaneously investigating the possibility of a consortium, which O'Brien called a longer process.

The UA Board of Regents next meets Nov. 10-11 in Fairbanks. Whether regents then vote on the future of UAA and UAF sports likely hinges on how much progress has been made regarding a waiver or consortium model, said Robbie Graham, UA's associate vice president for public relations and federal relations.

"We are hopeful we can at least have some preliminary answers by that November meeting,'' O'Brien said. "There's a sense of urgency that we will have something to share at that meeting.''

After November, there's not another scheduled full regents meeting until March 2-3 in Anchorage, although Graham said the regents can call for a special meeting at any time.

Connecting with the community

Morgan Ross is a UAA junior, the captain of the Seawolves gymnastics team and someone who knows hard times and has overcome them.

As a high school freshman in Reno, Nevada, and again as a junior, Ross broke her right tibia and fibula, both times while executing a double-back somersault dismount from the uneven parallel bars.

She persevered and accepted an offer from longtime UAA coach Paul Stoklos to walk on with the Seawolves. She chose UAA over a walk-on opportunity at Boise State University, figuring going to Alaska would be an adventure.

And it has been. Ross not only has achieved a 3.69 grade-point average as a double major in environment and society and Spanish, she's earned athletic scholarship aid and has come to love camping and hiking here.

Ross believes college sports play a pivotal role in the community and are a piece of a community's identity.

They have helped the Benton Bay Lions Club with vision screening at the Alaska State Fair and worked at a clinic conducted by Fast and Female, a group of adult women athletes who seek to empower female athletes ages 8-18.

"It's really easy to see athletics is what bridges the gap between UAA and the rest of Anchorage,'' Ross said.

While Strategic Pathways aims to cut costs, the report on athletics noted that cutting some sports "could erode the community's confidence in the university,'' drive off sponsors and supporters, prompt the loss of students who go on to become community leaders and generate negative media.

Ross, naturally, wants her sport to remain alive at UAA so she and her teammates can continue competing. She also believes she and college athletes strengthen Anchorage with their volunteer work.

"The biggest thing for us as a gymnastics team is, yes, we want to excel athletically, but we also want to inspire young athletes and students,'' Ross said. "We want to be a shining example in our community.''

UAA athletes last school year compiled a combined 3.24 GPA – the gymnastics team checked in at 3.64 to rank No. 7 among 82 college gymnastics teams in the nation — and contributed those 2,600 hours of community service.

Seawolves coaches and athletes, who spoke at the September forum where UA President Johnsen appeared, stressed how athletes achieve higher grades and graduate at a higher rate than the general student body. They also highlighted a number of UAA athletes who went on to become teachers, doctors and business leaders in Anchorage and around the state.

Field, the UAA skier, is taking 19 credits this semester while majoring in health sciences, working toward a minor in psychology and thinking about pharmacy school down the line. She noted the athletic department also contributes greatly to diversity on campus and in the community.

Among her teammates are athletes from Estonia, Italy, Latvia, Sweden, Norway and Australia. UAA's other sports include athletes from Kenya, New Zealand, Germany, Finland, France and the Czech Republic.

"That brings a very different cultural aspect to the university and the community,'' Field said.

Johnsen, a former Division III tennis player with a son who played Division I football, has heard plenty about the value of athletics lately. UA spokesperson Graham recently said Johnsen has heard from more than 1,200 people through forums, emails and other communications.

UAA ski coach Sparky Anderson recently pointed out that several of his former skiers have been honored by the Alaska Journal of Commerce's "Top Forty Under 40" program.

"The return on the University's and the Regents' investment in our program is incredibly good,'' Anderson said.

Controlling what they can

These are anxious and uncertain times for UAA's roughly 180 athletes – 152 of whom receive scholarship aid, the school said – and the athletic department's 56 employees.

UAA Athletic Director Keith Hackett told assembled athletes at the department's annual Seawolf Start to concentrate on the things they can control – going to class, competing in their sport and being good citizens.

Stoklos, the gymnastics coach, said his athletes and staff have done a good job of not letting the prospect of budget cuts temper training for the upcoming season. The team talked about the situation at the start of the semester.

"We're going to go on and keep doing our jobs like we're supposed to,'' Stoklos said. "What we came up with is, we have a season in front of us, and that's what we need to focus on and deal with.''

UAA junior goaltender Olivier Mantha, voted Most Valuable Player by his teammates in each of his first two seasons who's earned a 4.0 GPA in math, said the Seawolves are diligently working to narrow their focus.

"It's not an easy situation, but there are people on it,'' Mantha said. "We just have to focus on what we can control – school, and working hard in practice and trying to get some wins for our fans.

"The theme this year is to win games and not worry about the budget crisis. Let's be honest – we don't have any role in that process,'' Mantha added.

Ross said the gymnastics team's practice facility at the Alaska Airlines Arena has served as a sanctuary of sorts.

"Outside of the gym and team meetings, that's where we start to feel the concern and the pressure,'' Ross said. "But it's also brought us closer together as athletes and as a team.

"When we get in the gym, we're not concerned with the budget or our future. We're focused on what we can control, and that's our athletics.''