For UAA volleyball player Vanessa Hayes, change is the only constant 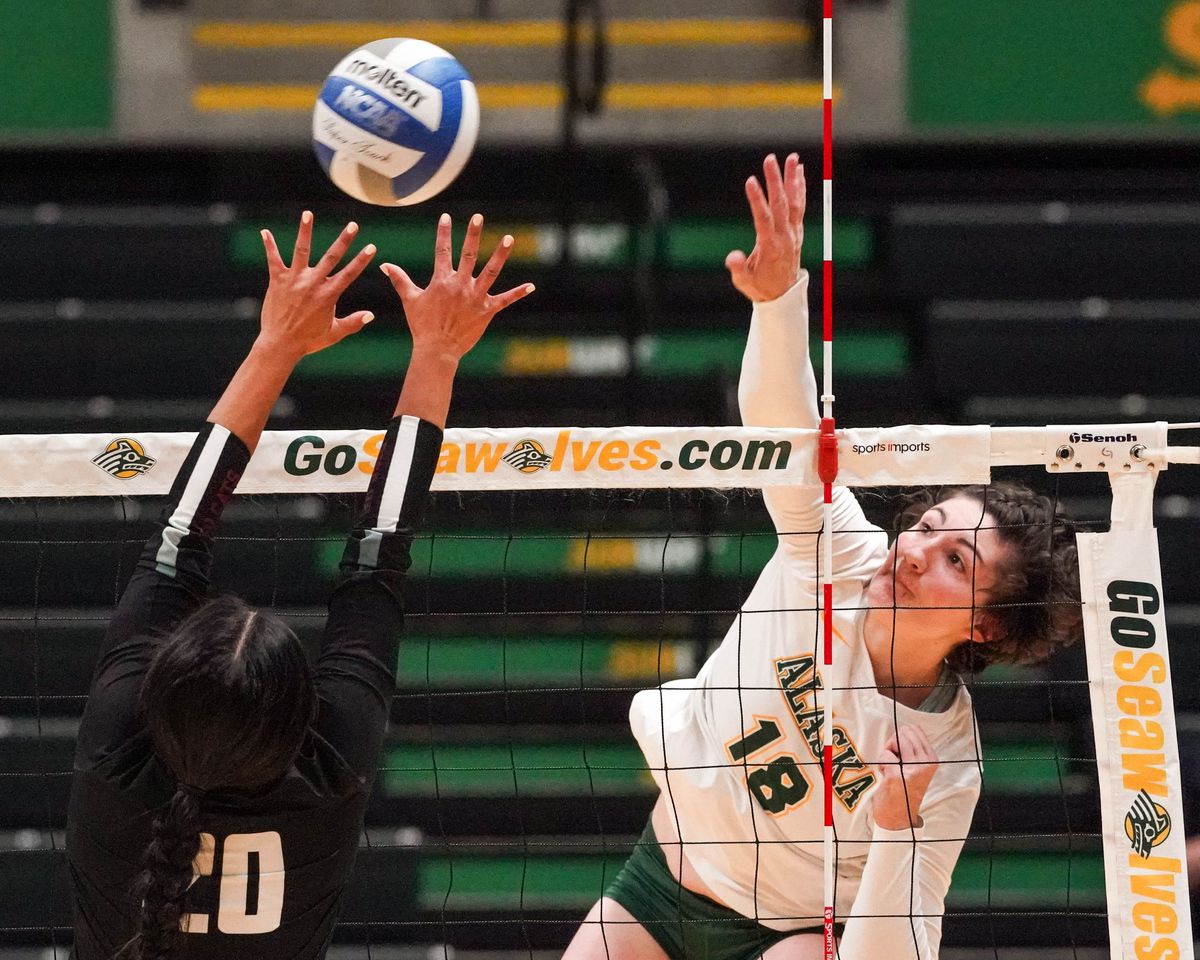 Vanessa Hayes, who switched positions halfway through her careeer at UAA, ranks second in kills and aces for the Seawolves. (Loren Holmes / ADN)

Vanessa Hayes, who switched positions halfway through her careeer at UAA, ranks second in kills and aces for the Seawolves. (Loren Holmes / ADN)

Talk to college athletes as they approach the end of their final season and you often get some variation of this:

“The time just flew by. I can’t believe it’s almost over.”

Talk to Vanessa Hayes as she heads into the final two regular-season matches of her four-year volleyball career at UAA and you get this:

And there’s more. She switched majors from biology to psychology. She lived on campus, then off campus, then on campus again. She chopped off her long hair in favor of a super-short cut.

And last season she reinvented herself as a volleyball player by leaving the only position she had ever played. Recruited by the Seawolves as a middle blocker, Hayes will go out as an outside hitter.

Hayes, who stands 5-foot-11, is the lone senior on a UAA team that will make its final home appearances this week with matches Thursday and Saturday at the Alaska Airlines Center. Before Saturday’s match against Seattle Pacific, she’ll be honored in a ceremony that will also recognize Anjoilyn Vreeland, a redshirt junior from Anchorage who is skipping her final year of eligibility to focus on academics.

Hayes, 21, is the only player remaining from the 2016 season, when UAA was the national runner-up in the NCAA Division II tournament. If the Seawolves go far in the playoffs this season, she is bound to be one of the reasons why.

She ranks second in kills and second in aces for the Seawolves (20-6 overall, 15-3 conference), who have a slim shot at ending the weekend as champions of the Great Northwest Athletic Conference. They are in second place in the conference, one game behind nationally ranked Western Washington, a 24-2 team whose only losses this season are to UAA.

She has played in 464 sets for the Seawolves in her four seasons, the fourth most in team history — which means Hayes coped nicely while taking on a new position midway through her college career.

“It took a year to learn,” she said. “I’d never had to pass before, so last year it was like I was a freshman again.”

Passing the ball — something middle blockers don’t often do, in part because many only play in the front row — was just one of the adjustments Hayes had to make moving from the middle to the outside.

The footwork is different, the sets are higher and patience is a necessity. Middle blockers get quick sets — if the ball is coming their way, it comes quickly, and it comes right to them — but outside hitters get high-arcing sets that often come from a distance, so they need to wait for the ball and adjust to it.

Plus, there’s that pesky antenna right in their faces.

“Hitting a ball is hitting a ball, but when you’re outside on that pin, you get nervous," Hayes said of the thin rods that rise up from either end of the net to help players and officials know if a ball is in-bounds. "The antenna is right there. It still feels like it’s in my face. I still struggle to hit the line. I see the antenna and I see the blocker, and I think there’s no way I can get it between them.”

Hayes came to UAA from Salem, Oregon, the third of John and Luisa Hayes’ five children. She didn’t start playing volleyball until she was in middle school, and her size made her a good candidate to play the middle.

She’s not particularly tall for a college middle blocker, Green said, but when she was recruited, that’s what UAA needed so that’s where she stayed. Within two seasons, though, UAA’s needs changed — the Seawolves lost a couple of outside hitters they didn’t expect to lose, and Hayes got the call to move to the left side of the net.

Hayes plays the front row and stays in the lineup to serve before rotating out so a defensive specialist can play the back row. She’s one of the best servers on a good-serving team — her 49 aces this season are one fewer than sophomore teammate Maggie Schlueter and rank her 19th in the nation in that category.

She owns a .216 attack percentage and her 305 kills rank second on the team behind the 367 amassed by outside hitter Eve Stephens. She was named the GNAC player of the week earlier this month after getting 17 kills in a three-set win over Western Oregon and 19 in a four-set win over Concordia-Portland in a pair of matches played in her home state of Oregon.

“As far as hitting goes she’s improved a ton this year, and physically she’s better than she was at the beginning of the year — she’s jumping higher than she ever has," Green said.

If she had one more season of eligibility she’d be even better, he said, because it’s as if she is a sophomore when it comes to her new position. Hayes agrees.

“I’m still trying to learn to read the block,” she said. “There’s still so much I could improve on. Sometimes I do wish I had more time here. Sometimes I wish I had started (playing outside hitter) as a freshman.”

Hayes spent her junior season playing her new position with a new name after getting married. The marriage didn’t last — she got engaged at the end of her freshman year, was married during her sophomore year and divorced by the end of her junior year.

“Obviously things didn’t work out," she said. “It was difficult trying to be a wife, a student, a daughter, a good teammate, learn a new position and keep up with school.”

Most if not all athletes deal with off-the-court issues, Green said, and Hayes dealt with hers well.

“She comes to the court to work,” he said. “It’s her stoic attitude, her coming to practice every day to work her tail off. She’s not a rah-rah cheerleader but she leads by example. She’s level-headed, and I think she helps the team realize what’s important and what not to get upset about.”

Hayes is on track to graduate in the spring with a degree in psychology, and after that she intends to stay in Anchorage with her dog, Luna, until she finds a university where she can work as a graduate assistant coach while getting a master’s degree. Her ultimate goal is to become a child psychologist, but right now she is bracing herself for yet another change — life without UAA volleyball.