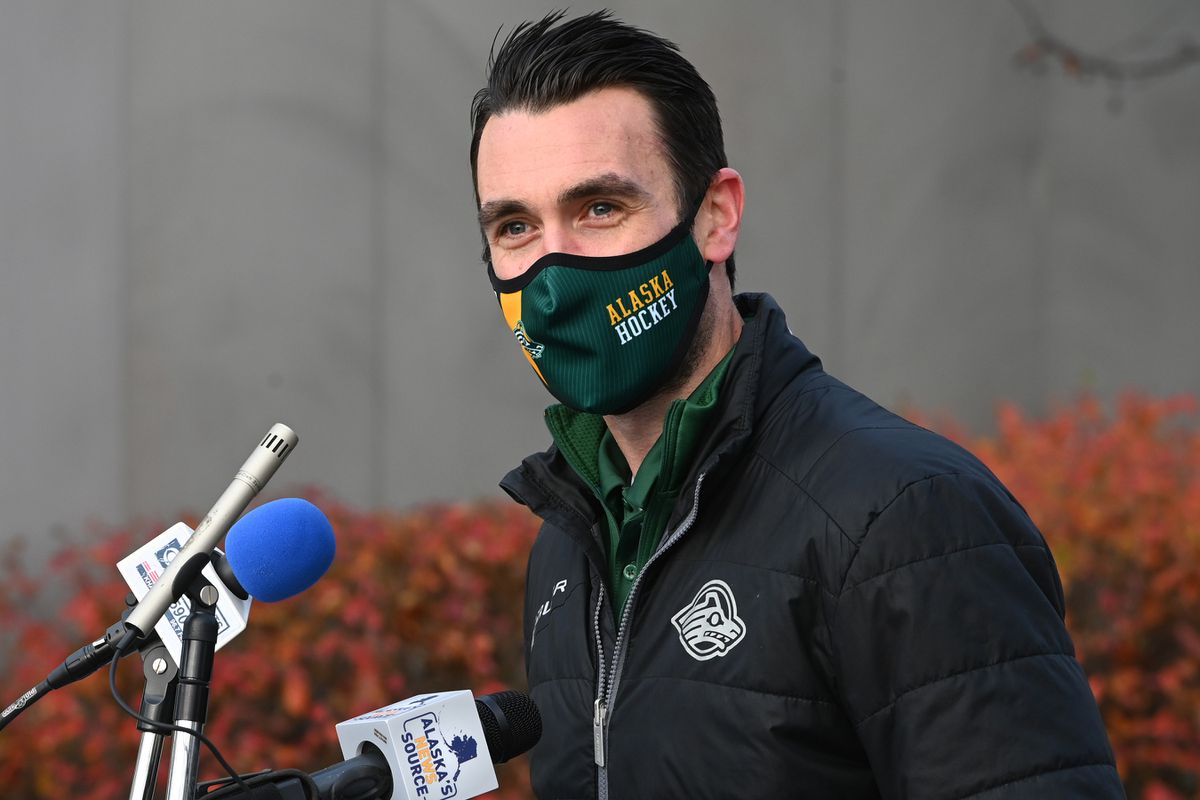 Maybe no one needs a silver-linings playbook more than Matt Curley, a coach whose entire season was just canceled by school administrators, whose team was forced to move from a spacious arena that holds thousands to a crackerjack box that seats hundreds, whose conference is abandoning his team and whose program will be axed unless millions of dollars can be raised in the next two or three months.

All this in less than three years in a job few others wanted — UAA hired Curley in April 2018 after two or three others turned down offers.

“I’ve learned how to take a punch,” Curley said after the UAA hockey team absorbed its most recent body blow — the cancellation of the 2020-21 season because of the rampaging COVID-19 pandemic.

“It certainly has been trying. I’m here to continue to try to fight for this place. We’ve talked about this before — I love it here. This is home, and I believe in this place. It wasn’t in the cards for us this year, and I’m trying to see the silver lining.”

It is not a great time to be a Seawolf. No hockey games this year, and maybe no games ever again — not unless the Seawolves and their supporters can raise $3 million to save the team from elimination.

But — silver lining alert — Curley suggested that losing UAA hockey this season might inspire donations that could save it in the long-term.

“For better or worse, we’re going to see what it’s like not to have a high level of hockey in our city,” he said. “This gives a view into a future I don’t think a lot of folks want — Anchorage without hockey.”

Another silver lining: The Seawolves might not have games to prepare for and play, “but we’ve got something to work for and push for,” Curley said. Players can help the Save Seawolf Hockey fundraising campaign, which so far has raised nearly one-third of the donations and pledges needed to save the team, and they can keep working toward their degrees.

Players will also have ample time to consider their futures. With no guarantee UAA will have a team next season, they will explore options like transferring to another school or going pro in Europe or a minor league like the ECHL.

With 61 Division I hockey teams in the country, roster spots are limited and the competition for them will be greater than ever next season. Besides the usual influx of new players coming from high schools or junior hockey teams, every player in the nation is being granted an additional year of eligibility because of anticipated disruptions due to the pandemic. So all of this season’s seniors can play again next season if they want to.

If the UAA program goes away, the Seawolves will add to the mix of players looking for teams.

“Our focus right now is to right this ship and make way for our survival, because I think for a lot of the guys their best opportunity is to continue to be here,” Curley said.

If the team survives, it could wind up having a good recruiting season — another silver lining.

“The player pool is going to be substantial, and not everyone can play for North Dakota,” Curley said. “Guys are going to need homes.”

Yet for all the bright spots Curley is determined to see, two problems aren’t going away. One is the impeding loss of UAA’s conference affiliation and the other is an adequate playing facility.

UAA is one of 10 teams in the Western Collegiate Hockey Association, but after this season seven team are leaving to form a new league that doesn’t include Alaska’s two schools or Alabama-Huntsville. Putting together a full schedule of games is difficult without a conference affiliation, and Curley said the idea of UAA, UAF or Huntsville being invited to join another league “just doesn’t seem feasible.”

Few Division I conferences are eager commit to regular trips to Alaska — or to welcome a team that plays in a place like the Seawolf Sports Complex.

The on-campus rink has neither the capacity nor the locker room facilities to meet WCHA standards, although the conference granted UAA a grace period to expand when the school moved out of its longtime home at Sullivan Arena prior to last season.

Significant expansion hasn’t happened. The wooden bleachers seat less than 1,000, not nearly enough to generate ticket sales that could put a dent in operating expenses. There aren’t any obvious alternative places to play — Sullivan Arena was converted to a homeless shelter, and the school’s impressive Alaska Airlines Center was designed with no thought of playing hockey there.

“Quite frankly, it’s probably part of the reason we’re in the situation we are — a lack of a sustainable facility,” Curley said. “That’s a huge piece we’ve been missing. It’s something we have to tackle in some capacity.”