In Mountain View, a youth center staffer gives kids the fathering he never had 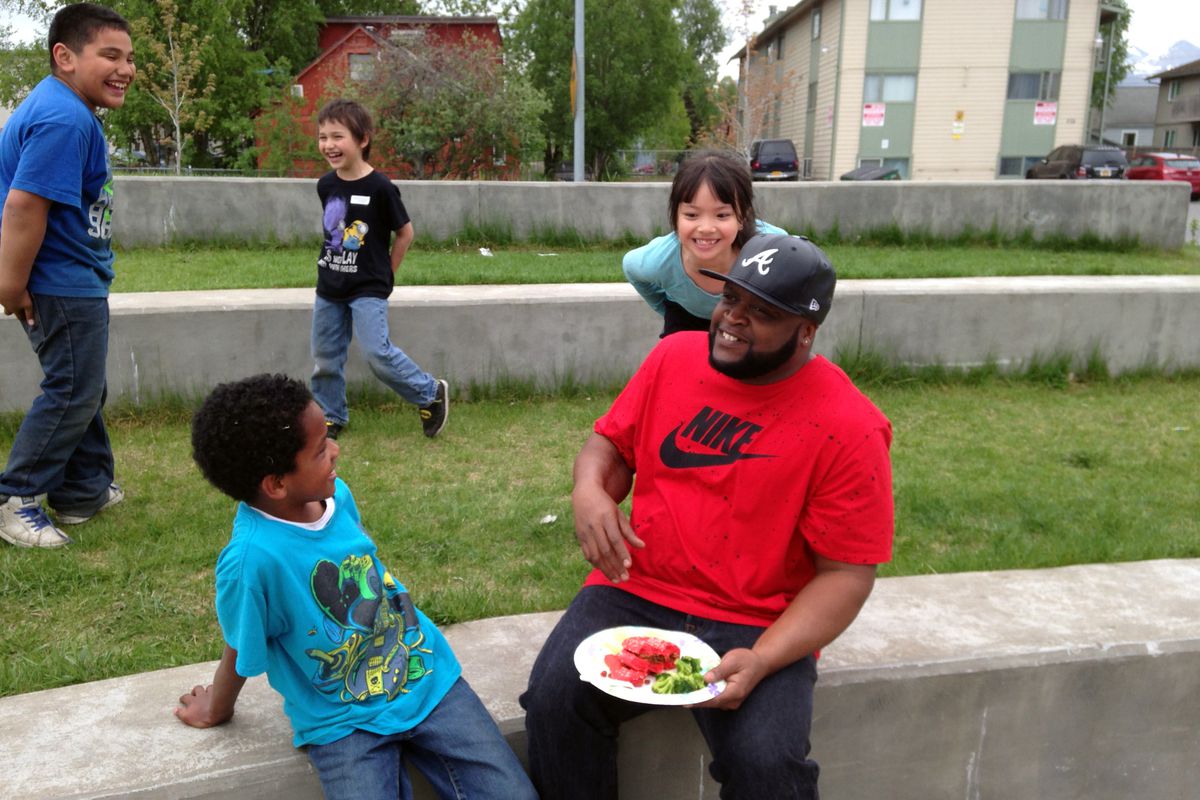 Carnard Davis is a beloved father figure for many children and the teen coordinator at the Mountain View Boys and Girls Club and Community Center. (Charles Wohlforth / Alaska Dispatch News)

Carnard Davis is a beloved father figure for many children and the teen coordinator at the Mountain View Boys and Girls Club and Community Center. (Charles Wohlforth / Alaska Dispatch News)

Carnard Davis found his father in the Atlanta phone book. When he was 13, he and his 15-year-old brother called through all the names that matched, asking each man who answered if he knew their mother.

Davis' father had another family but agreed to meet the boys he had never known.

"It was awkward," Davis said. "By that time I looked up to the drug dealers in the neighborhood. They were the ones telling me to go to school."

After a long journey through prison and absence from his own daughter, Davis has dedicated his life to being a dad to kids in Mountain View who need it, the kind of father figure he never had. At the Mountain View Boys and Girls Club and Community Center, where he is known as Mr. C, several men take the responsibility of helping raise the neighborhood's kids.

They go to games, birthday parties and graduations, give advice and intervene in conflicts. They call them "our kids," the 1,200 children and teens who come for sports, homework time, free meals, movies and music. The center is a collective living room, a safe place.

They know these kids, coach them, joke with them and have them hanging off their arms and legs. They say the kids appreciate discipline, when it's done with respect.

Davis had tears welling up when I met him. He was watching an inspirational video on his phone that he wanted to show the teens. His boss, the center's director, Dave Barney, reviewed the video and then mentioned some social media posts of Davis' he was concerned about.

Davis had been publicly venting on a deadbeat dad who lives in the neighborhood.

"This guy's spending money on liquor bottles in clubs and he won't even spend on an entry fee for his kid to be in a weekend league," Davis explained.

Mountain View is not as hard as the ghetto housing project where Davis grew up in Atlanta, but it is Anchorage's poorest neighborhood, as well as the most racially and ethnically integrated neighborhood in America. Staff at the Boys and Girls Club get involved in the lives of many children who move frequently and don't have safe homes.

[Crime and punishment: The values debate in the Legislature]

Davis, 45, grew up with a mother on welfare and four brothers and four sisters who had four different fathers, some of whom were drug dealers. He went to church and stayed in school, but he could see that drugs and violence offered the only clear route to success in his world.

As a teenager, he washed cars and worked as a delivery boy, but after he started dealing crack cocaine, he became popular in high school. He drove a BMW to school and bought everyone lunch. He was good at dealing. Several people worked for him.

One day in 1989, it fell apart. Someone stole a stash of drugs. Davis went looking for the thief with a gun, running through three crack houses until someone said the thief had just left (in fact, it was the wrong person). Davis and his cousin started beating the man. Davis hit him with the gun, which went off and shot him through the head.

Davis hid at his girlfriend's house.

After hiring a lawyer with the drug money hidden in his car, Davis turned himself in and accepted a plea of voluntary manslaughter that came with a 20-year sentence.

In prison he became a barber and earned his GED. He posted it over the barber's chair and encouraged the other inmates to get theirs. He mentored men new to prison to show them how to get by.

He met killers who were proud of what they had done. He counseled a man who had killed his parents. He talked with a murderer and rapist headed for execution who urged him to do something positive with his life.

He was just starting his term when his daughter was born.

"My dad was not there for me, and now I'm not going to be there for my daughter. It's like a cycle repeating," he said. "I didn't want to be a deadbeat."

Davis behaved well in prison and didn't get in trouble again when he was released in 2004, but he kept living in a dangerous neighborhood. He was carjacked and shot. His cousin was murdered.

[Racial disparities in the justice system]

On that occasion, he went looking for the killers in a rage. Once again, he said, "There's a spirit of homicide that came over me."

But instead of acting, he stopped at a church and knelt down with elders to pray. And he decided to leave Atlanta.

In 2011, Davis moved to Alaska, where a friend he had met in prison invited him for a vacation. He was afraid the Boys and Girls Club wouldn't hire a felon, as he told Dave Barney when we met.

"Before I actually submitted it, I prayed," he said. "I asked God, 'If this is what you have for me, so be it.' And then you called. I was jumping all over the apartment."

He has found a home there and a purpose in life.

"My time is dedicated to wanting to do right, what I love doing," Davis said. "When you love doing something, everything else doesn't matter. And I know what I didn't have when I was younger."

"You're raising a neighborhood," Barney said.

"It feels great, coming from where I came from," Davis said.