Inside Alaska's world of sex work from someone who lived it 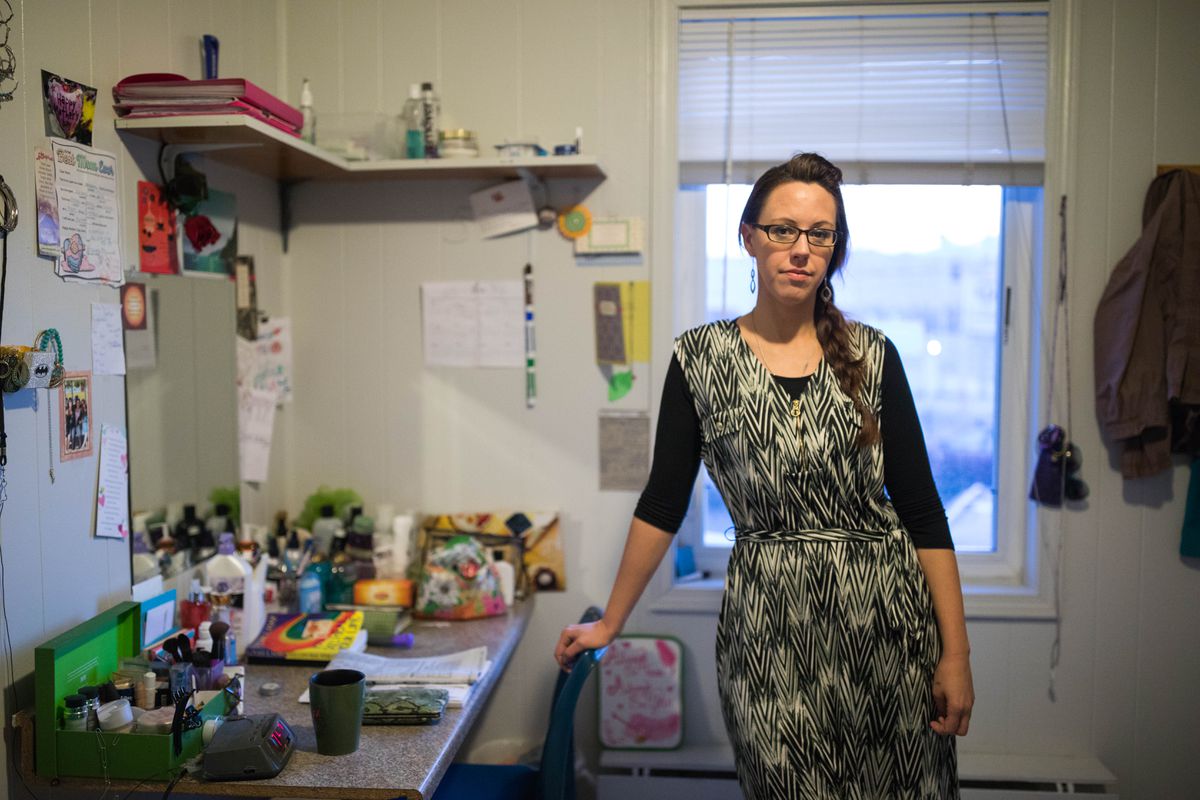 Amber Batts, photographed in her room at the Glenwood Center halfway house in Anchorage on Thursday, Nov. 3, 2016. Batts pleaded guilty and was convicted of sex trafficking in 2015. (Loren Holmes / Alaska Dispatch News)

Amber Batts, photographed in her room at the Glenwood Center halfway house in Anchorage on Thursday, Nov. 3, 2016. Batts pleaded guilty and was convicted of sex trafficking in 2015. (Loren Holmes / Alaska Dispatch News)

The first time Amber Batts traded sex for money, she said, she was 30. She had two small children, her husband at the time was hurt at work, she said, and they needed money. She answered a newspaper ad and soon found herself at a trailer in view of the giant neon tattoo shop gun in Spenard. She knocked on the door. A man ushered her inside.

He gave her the rundown: always get the money up front; don't do anything extra without a condom; don't do anything that doesn't feel safe; let somebody else know where you are. She sat on a couch and watched women come and go. Her "date" arrived, a white guy in his 50s. He wore glasses and worked an office job. He was nice, she said. Afterward she felt no emotion. She was numb.

That was more than a decade ago. Batts has been involved with the sex trade since then, and in and out of the court system. Most recently, in 2015, she was convicted of sex trafficking and is now serving her sentence.

Batts and I briefly worked together at the Anchorage Daily News when she was a clerk and I was a young reporter in the mid-2000s. I contacted her in jail and, over a few visits, she told me about her life and how she understood sex work in Alaska. Our conversations underscored what I heard from advocates and investigators: Many women involved in the sex trade come to it as victims of abuse and exploitation and, eventually, a few, like Amber, may become perpetrators of abuse or exploitation themselves. (Men, though, still account for the majority of sex-trafficking offenders.)

When I pulled Batts' file, I had also been following the case of Troy Williams and Heidi Ross, accused in 2015 of torturing women and forcing them to have sex. That's what I thought of as sex trafficking: force and a lack of consent. Williams is scheduled to go to trial in January.

As I researched, though, I saw changes to the law in 2012 had struck the word "prostitution" from statutes and replaced it with "sex trafficking." Batts was charged with a crime that had formerly been called "promoting prostitution," but is now called second-degree sex trafficking. The state does not generally charge individual sex workers now, prosecutors told me. Instead, it focuses on those who profit from others' work in the sex trade.

Batts had been what some people call "a madame." Investigators said she and her husband operated an escort service online, representing as many as 10 women and men in Anchorage, the Mat-Su, Juneau, Fairbanks and Kenai. Batts placed ads for them online, took credit cards, screened potential clients and maintained an apartment where women took men to have sex. For that, she took part of the profits. She was sentenced to five years for second-degree sex trafficking. Batts had prior felony convictions that influenced her sentence.

Batts' court file held a number of letters of support from state and national sex workers' rights organizations. What Batts was doing — screening clients with online background searches, providing a safe house for sex work to take place — they said, was "harm reduction" for women in a line of work that isn't going away. What they called sex work, what many people think of as prostitution, wasn't the same as true sex trafficking, they said. Supporters raised money online for her and her children. She began writing an online column from jail, railing against sex-trafficking laws in Alaska.

"What happened to the belief that America was built upon, that each man has the right to do what he wants to do with his own life as long as he does not interfere with his neighbor's pursuit of happiness?" she wrote in January.

After that first encounter at the Spenard trailer park, Batts said, she took careful note of how sex businesses operated and how much money went to operators.

"Me and some of the other girls that I'd met that weren't crackheads or drama queens, we got together and said, 'Let's get our own place,' " she said.

The women who worked for her business were from all walks of life. People think they know what women in the sex trade look like, she said, but they're wrong.

I asked her to describe the market for prostitution. Who paid for sex? Some clients were tourists, she said. And Slope workers. People with money to spend, she said.

Batts tried to work in offices, but she kept coming back to sex work. Even when she was running her business, she said, she also had sex for money. Her business didn't make her rich, but she was comfortable, able to pay for a car and her trailer in South Anchorage as well as the apartment where the prostitution went on. She even reported her income to the IRS, she said.

Everybody who does it has their reasons, she said. One woman she worked with was a single mom, recently out of school, who needed to pay for a new car. Another loved shopping, purses, cars and gambling. The main thing all of them had in common: an ability to disconnect from their bodies, Batts said. She never met a woman in the business who didn't have some kind of history of sexual trauma.

"Generally, there would be some DV stuff, most recent, and there would usually be some sexual abuse in the family. That's kind of what I found, whether it was an uncle or a dad or a brother," she said.

"Women don't get into prostitution because they are already in line with their emotional self. We come into it pretty fractured."

Batts said she grew up in 14 foster homes and is a survivor of repeated episodes of abuse. In one of her columns, she describes helping police catch a man who abused her when she was 16 and living in a Juneau group home. After that, she wrote, she felt an "aching emptiness." There were ways that sex work seemed like an answer to all that had happened to her.

"I wanted to have control over what was said and what was done. That gave me a sense of empowerment no matter how twisted or illogical it was," she said.

Drug addiction is common among women involved in the sex trade, she said. It can be a motivator and a numbing kind of coping mechanism. It also leads people into unsafe situations.

Batts had her own struggles with addiction. She had stretches of sobriety, punctuated with dark relapses when she abused pills and alcohol, she said. During one, in 2007, she stabbed a stranger in a bar with a broken bottle, nearly killing him. The rage that overcame her was connected to the way her past had damaged her, she said. She's thankful now that she didn't kill him.

The long-lasting impact of sex work comes out in relationships, she said.

"It's hard for me to actually have a healthy relationship with another person, because of my past, because I don't know where the care and concern and sometimes persuasiveness melds into manipulation," she said.

Batts is living in a halfway house and working in a restaurant kitchen. She and her husband, who was also convicted of sex trafficking, are no longer together. She's trying to stay connected to her kids. She has more than a year left to serve. She's interested in doing some advocacy work for women in the sex trade when she gets out, she said. Her employment plans aren't formed yet.

I asked her the best way to get women out of the work. Some cities have programs that offer women counseling or help with jobs and housing instead of jail when they are picked up for prostitution. There are "john schools," programs that educate men who buy sex about how it hurts women.

Advocates, counselors and lawyers I talked to told me that women with histories of prostitution drift unnoticed in and out of the system. Many start as foster children with histories of abuse, most have addictions, many are young parents. A starting point to help women out of sex work, I heard often, would be for someone to notice them and ask them to tell their stories. Amber wasn't interested in diversion programs or prosecuting johns. The victimization that primed women for prostitution, the circumstances that led them into the life, to her, seem inevitable and unstoppable.

The best thing would be to try to make sex work safer and give women options if they want to get out, she said.

"Prostitution is always going to be in Anchorage," she said.