Ready to roost: Residents settle in at Anchorage 'cohousing' community 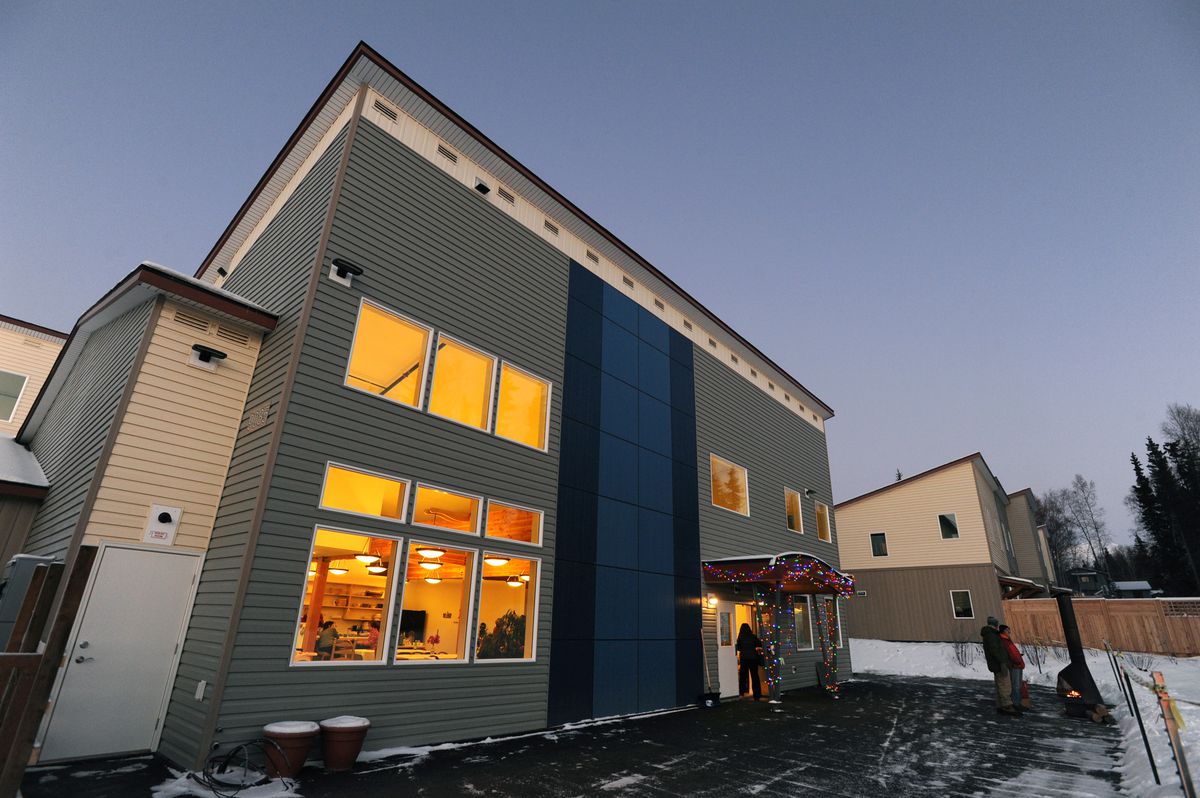 Warm light radiates from the common house windows as the sun sets on Dec. 11. Ravens’ Roost is Anchorage’s first cohousing community of privately owned homes designed for neighbors to get to know one another. (Bill Roth / Alaska Dispatch News)

Warm light radiates from the common house windows as the sun sets on Dec. 11. Ravens’ Roost is Anchorage’s first cohousing community of privately owned homes designed for neighbors to get to know one another. (Bill Roth / Alaska Dispatch News)

It all started with a book. One day Mary Miner was browsing the shelves at Title Wave in Spenard when she stumbled upon a book about cohousing.

Intrigued by the concept, she contacted the book's author, Chuck Durrett, who eventually flew up to give a talk about cohousing at the Anchorage Museum.

Cohousing communities are designed so that neighbors get to know each other — something residents say they've noticed has become a less common part of life.

"I think on many levels right now we're all kind of detached from each other," Miner said.

Most of the people in 25 households at Ravens' Roost have moved into their private homes. The development sits on a 6.2-acre plot of land in South Anchorage off Abbott Road.

Residents own their homes but also co-own shared spaces, including a 3,800-square-foot common house where a dinner was in full swing on a recent frigid evening. The common house has a large kitchen that flows into a dining area, a kids' play space, a living room with a library, guest rooms and an optional shared laundry area (laundry hookups are also in the homes). The common house connects to an atrium that contains 12 condo-style homes. The homes' front doors open into the atrium, creating opportunity for spontaneous interactions, residents say.

The rest of the homes are clustered around the common house. There's also a 1,450-square-foot workshop for woodworking, ski waxing, bike maintenance and working out.

Craving a sense of community

Cheri Scott is one of Ravens' Roost's residents. At the recent dinner she sat at a table between her husband Allan and granddaughter Rosebud in the common area. About a dozen other cohousers were there for dinner too, and the room buzzed with chatter. Some of the night's food offerings: halibut enchiladas, artichoke and salmon dip, whole-grain bread and broccoli salad. (Ravens' Roost's residents have the option to share meals, which are prepared by cohousers who sign up for the duty.)

Scott said cohousing appealed to her in part because her kids are grown, and she and her husband didn't need all the space in their Hillside home.

"We liked the idea of being in a place where we knew our neighbors more than just a wave as they walk by with their dogs or as people were going to and from work," Scott said.

"Because where we lived before, farther south on the Hillside, everybody was working so hard just to be able to afford their houses, and you hardly ever saw them except maybe on a weekend when you were mowing the lawn or weeding."

Scott and her husband also have an adopted adult son named Justin who is living at Ravens' Roost with them. Developmentally disabled because his birth mother drank alcohol during pregnancy, Ravens' Roost seems to be a good environment for him so far, she said.

"He's pretty much nonverbal, but he loves being around other people and he just loves it that when he walks down the hall people know his name and they stop and say hi and ask him how he is. And, you know, he responds the best he can, and he just likes to come and hang out with people," Scott said. "Those are things that he didn't have the opportunity to do, except with paid staff before, other than if we were facilitating."

There are some misconceptions about cohousing, Scott said. Some people thought she was moving into a hippie commune.

"It's like, no, we're not. People wear clothes, we don't all own everything together and there's not free love — well, as far as I know, there isn't," she said, joking.

"It's like being a homeowner anywhere else but you have the benefits of a big common space," Scott said.

Scott, a master gardener, said she's particularly excited for communal and individual garden plots on the property once summer arrives. The four-times-a-week common meals are another positive.

"It's turning out to be quite the social event, just having people come into the kitchen to come get the meal ready," she said.

Not an easy feat

Ravens' Roost residents were friendly and easygoing at the evening dinner and a holiday tree lighting a few days later, but they also talked about the challenges in making the cohousing neighborhood a reality.

Miner said they ended up splitting the development into two phases in order to secure financing. Pre-sales on the homes were also key for loans.

On a project like this, especially given the state's economic uncertainty, she said, "the banks are really cautious and taking a very conservative approach, so that builders have to go and get basically contracts from the buyers before the bank will loan them money."

So far, 29 of Ravens' Roost's 35 one- to four-bedroom homes are built. They have full kitchens, south-facing windows, a six-star energy-efficiency rating, one to two shared walls with other units and in-floor heat. Miner's home, however, doesn't exist yet.

"That's the punchline. After five years of doing this 24 hours a day, seven days a week, our unit is in Phase II," Miner said. There isn't a firm completion date for the second phase. (Construction will start as soon as they sell enough homes to qualify for a loan.)

Some residents are in their 30s or 40s, but most are in their 50s and 60s — people who have had more time to save money.

In the future, "My hope is that there will be a lot more young families here than there are now," said Miner.

Terri Pauls — who has helped Miner develop Ravens' Roost since the project's early stages — said the age range is typical for a cohousing development group. Young families often come later, she said, based on her research of other cohousing projects.

She noted that the prices reflect the cost of new construction, which in Anchorage "is really high."

Ravens' Roost residents filtered into the common house dining area a recent Sunday afternoon for the holiday tree lighting and a bonfire. The public was also encouraged to drop by for a tour. As of mid-December, four homes were still up for grabs in Phase I of the project.

Many residents seemed excited to show off the space that's been years in the making. Ravens' Roost will have a grand opening Jan. 29. "Everyone is invited," Pauls said in an email.

Finishing Phase II of the project is a priority, but the residents' focus is also on day-to-day life at the South Anchorage property. There are different teams keeping tabs on everything from meal signups to groundskeeping to finance and legal matters. Reaching decisions on some things, like the animal policy, took a while, Scott said.

The transition from planning to moving into the space with the other residents is exciting, she said.

"Every weekend, somebody new is moving in," Scott said. "So we go from not seeing them at all to suddenly they're showing up with their moving truck. Then they're hanging out in the common room, finding out where everything is. Instead of seeing them once a month at a meeting to talk about how we're gonna make this work, now we're seeing each other every day."