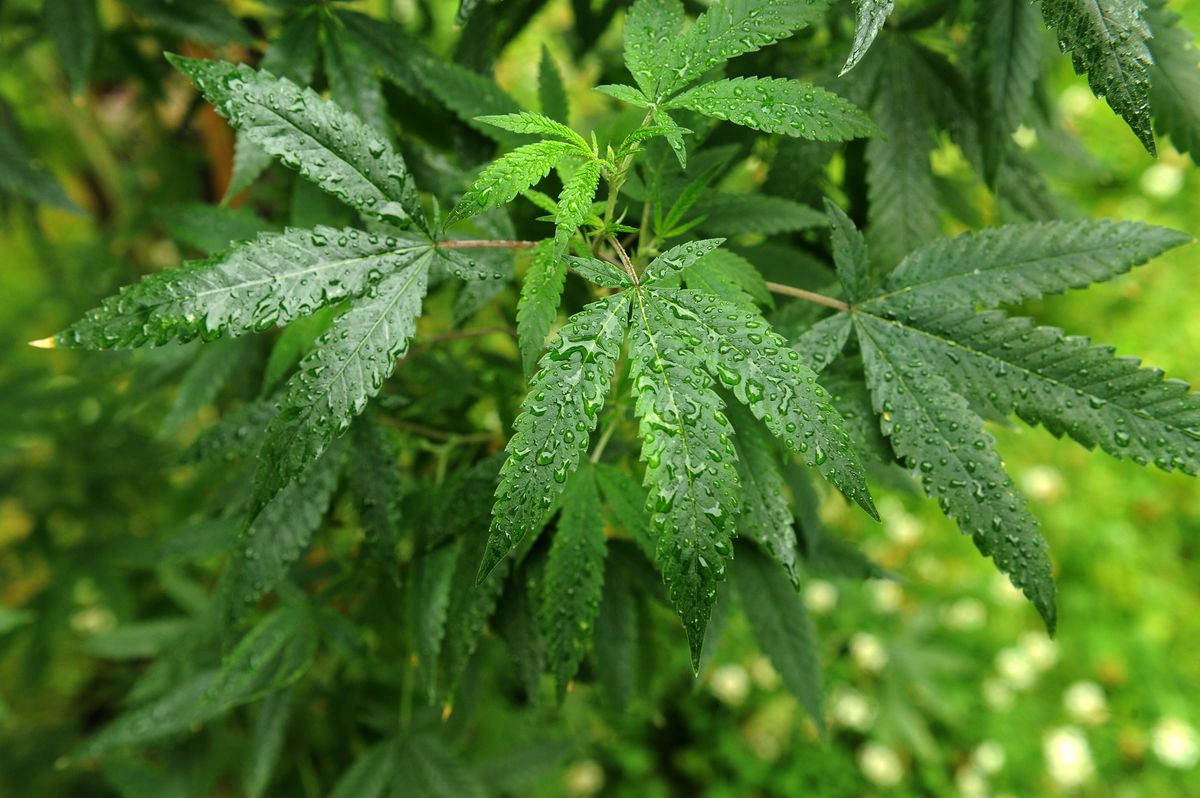 "This isn't it," said Roger J. Cobb, looking at a marijuana bud between his fingertips.

Cobb was standing in the rain outside of a Big Lake apartment building, where he'd just been given some marijuana to identify. The question before him: Was this the legendary Alaska cannabis strain Matanuska Thunder F—?

"Hard to tell," he said, eyeing it closely. "That don't look like it though."

It smelled too sweet, he said. It was too green.

Cobb is a longtime medical marijuana user who first experienced what he was told was Matanuska Thunder F— (also known as MTF) back in 1989. He was at Liard Hot Springs in Canada's British Columbia when he was handed a joint.

"I took three puffs and walked right into a telephone pole," he chuckled.

Cobb later sold marijuana when he first arrived in Alaska. He described walking into a large room full of plants — all MTF, he said. His source would be caught in a marijuana bust.

Now that commercial marijuana is legal, Cobb has been enlisted to help identify the strain by Big Lake resident and medical grower Ron Bass, who is hoping it will give him an edge in Alaska's commercial cannabis market.

With the help of old-timers like Cobb, Bass says he has found the original MTF, more than 40 years after it first carved its name into Alaska's cannabis history.

And Bass isn't the only one claiming to have MTF. Alaska's marijuana community is on the hunt for the famed strain, for both commercial and personal reasons.

But along with the hunt comes the acknowledgment that the strain's true story may forever remain a mystery — and that it may have already faded into the past.

Birth of a legend

MTF is shrouded in myth. Ask around the cannabis community, and most people say that it did indeed exist, first appearing in the early 1970s. Many say the name became synonymous with high-quality Alaska bud, rather than any specific strain, which makes tracking down the real thing that much more difficult.

People agree that MTF originated in the Matanuska–Susitna region, north of Anchorage. Some say Big Lake. Others say Sutton, Palmer or Wasilla. One common story says that the person who started it all, a grower in the Valley, created his own hybrid and named it MTF.

Perhaps the earliest print reference to MTF appeared in High Times magazine in September 1974. For a while, High Times tracked the types and prices of marijuana in states and cities around the world.

High Times listed "Matanuska Valley (strong)" as the domestic cannabis coming from Alaska, without noting the price. But in January 1975, just a few months later, the cannabis was listed as "primo Matanuska valley thunderf—." It was the most expensive marijuana one could buy in Alaska, at $70 an ounce, versus the "tex-mex" pot listed at $20 an ounce.

Less than a year later, in May 1975, High Times writer Blair Sachs-Benedict traveled to Fairbanks. The landmark Alaska Supreme Court decision Ravin v. State had just taken place. The ruling upheld Alaskans' right to privacy — and the right to possess small amounts of marijuana in homes — and landed Alaska on the August High Times cover.

Sachs-Benedict flew with two marijuana dealers in a small plane to the North Slope, where they negotiated drug deals with their buyers, who were courting deals from Californians, too. Money was flowing in from the pipeline, and between all that disposable income and the court ruling, people had their eyes on Alaska's market.

The writer describes MTF buds as "the size of a malamute's paw … the weed burns slowly, evenly, showing its good breeding, and the taste is smooth and full, with an authoritative bite."

Sachs-Benedict had never tried U.S. marijuana so good, and asks how the growers did it.

A man the article identified only as Nordhoff responds: "This weed is so strong it grows through the snow to find the sun. Its growing period is only five months long, counting the snow time, and it grows eight feet high. Farmers in the Valley plant it alongside patches of cabbage so big it takes two men to carry them, tomatoes so big you have to cut them off with a chainsaw."

Nordhoff proclaims MTF "the finest pot in the 50 states."

That was 1975. The strain's original grower was eventually busted some time later, as the story goes. Some say the strain was kept alive only in name. Others say it went underground. Depending on whom you ask, both the Hells Angels and the grower's mistresses are credited with saving MTF during that grower's bust, and passing the plants along.

MTF was supposed to be the most intense high on the market at the time. Most people say it has a skunky, earthy smell, with an intense, heady experience and pleasant body effects. Such qualities may seem subtle and hard to quantify, but they're important identifiers to those who are actively seeking the strain.

That is, if the strain still exists, which not everyone believes. "The story is that in the '70s, all the cannabis that was good in the (Mat-Su Valley) was called MTF," Juneau cannabis breeder Giono Barrett said. "I think (MTF) is kind of a myth."

Capt. Michael Duxbury, a commander with the Alaska State Troopers Statewide Drug Enforcement Unit, has worked for the troopers for 27 years. The MTF name was thrown around a lot during marijuana busts in the 1990s, he said. Later, in the 2000s, he heard it less often.

But others believe that the strain is still around, in some iteration. Ask, and some people say they have a friend of a friend growing it today. And there are a few people, like Bass, who truly believe they've found it.

Regardless of its true history, the legend of MTF takes on a life of its own. And its myth can be leveraged for money.

[Alaska Rep. Young is a founding member of the U.S. House Cannabis Caucus]

Even though only a few people in Alaska claim to have it, MTF can be found on marijuana menus in the Lower 48. At Silver Stems Fine Cannabis in Denver, an August offering of MTF sold out in a week — about normal for a popular strain, budtender Rene Lopez said.

Most Colorado customers had never seen it, Lopez said. "People are really, like, intrigued by it when they see it," Lopez said. "It goes pretty quick."

In Anchorage, commercial marijuana grower Justin Roland is skeptical. "It's so easy just to take two varieties and throw a name on it," Roland said. He doesn't think any outlet in the Lower 48 has the real deal.

"It's an addiction," Roland said at a Marijuana Control Board meeting in September, when his cannabis product manufacturing license was approved by the state board. "It's like, you can't have enough shoes, I can't have enough strains."

Roland says MTF is like "that ghost in the dark that you can't get your hands on." He's made it a personal mission to track down the strain, which he "absolutely" believes can be found by relying on the senses of old-school Alaska stoners familiar with its taste and psychoactive effects.

But he worries that time is running out.

"Now, here's the problem," Roland said. "If it takes me another 10 years to find it, and these older generations aren't here to test it, then I will have no way to verify."

Beyond the personal fascination, there's commercial incentive. Though MTF may have been renowned in its time, today cannabis breeding has moved far beyond where it was in the 1970s. There are more desirable — and stronger — strains on the market today. But commercially, MTF seems to promise a home run.

"It's an Alaskan classic, so we want that in our cultivation facility," Roland said. "Tourists come to Alaska, everybody thinks MTF."

Back in Big Lake, Bass has opened a commercial marijuana facility, Calm n Collective, in the Mat-Su city of Houston. Like Roland, Bass believes tourists will flock to the namesake.

Bass thinks he's already found MTF. He's done the research — or at least the best research he can when trying to identify a particular mind-altering plant that became popular 40 years ago.

To do it, Bass first collected five different strains, all said to be MTF. He went to Fairbanks, Hatcher Pass, Sutton, Wasilla, Soldotna.

Then, he grew them up side-by-side.

The longtime smokers, Cobb included, tried each one and chose the one they thought most resembled MTF of yesteryear.

They all picked the same plant, Bass said: the one from Wasilla.

"We've been hearing about it our whole lives," Schlosberg said of the strain at his Anchorage home one day in July. Schlosberg speaks rapidly and is prone to tap-dancing through a conversation, jumping from one topic to the next. He's won awards for his own cannabis strains, and his knowledge on cannabis plants is dizzying.

Schlosberg, a medical marijuana user, says that money isn't his primary motivation in tracking down the strain.

"Being an Alaskan I feel almost, like, a duty to work with it," Schlosberg said.

But Schlosberg's MTF plants don't really resemble Bass'. One is large and lanky, the other small and bushy.

Schlosberg's theory is that there are many types of MTF, all originating from the same era and place. In cannabis breeding, most strains are some combination of indica and sativa cannabis. The two types look and grow differently, and have different effects on the user.

He thinks there are the short, bushy indica-prominent MTF plants like his own, and then there are the towering, lengthy sativas, like Bass'.

In some ways, marijuana breeding is simple. Put a pollinating male plant next to a flowering female plant, and you'll get seeds that produce offspring with traits from both parents. That's how breeders create plants with different colors, smells, tastes and attributes of the high.

But each offspring is different. Breeders must choose only the children plants that produce the desired effects. Some strains are more stable — meaning the offspring are more similar and predictable — than others.

One of the desirable traits of MTF is that it is old, from a small gene pool. Since it's reportedly so stable, it can be used as a building block for other strains. That would give old-school Alaska genetics a seat at the table, a new lease on life.

"If it doesn't go to a breeder … it will be lost forever," Schlosberg said.

But there's no guarantee that it isn't already gone.

Mark Hegener was one of those old-timers who tried Bass' weed. He, too, stood in the rain outside of a Big Lake apartment and vouched for the plants that Bass has grown. Hegener first encountered MTF 40 years ago, he said. When Bass gave him some, the plant looked like what he remembered. It had that same earthy taste. Heady experience. Pain relief.

But he acknowledged that there's no definitive way to tell.

"It's a good, tough question," he said. "None of this stuff was registered. It's subjective," Hegener said.

Bass agreed. "You know, there is no real proof," Bass said. "This is the closest we can get."