Alaska Rep. Young is a founding member of the U.S. House Cannabis Caucus 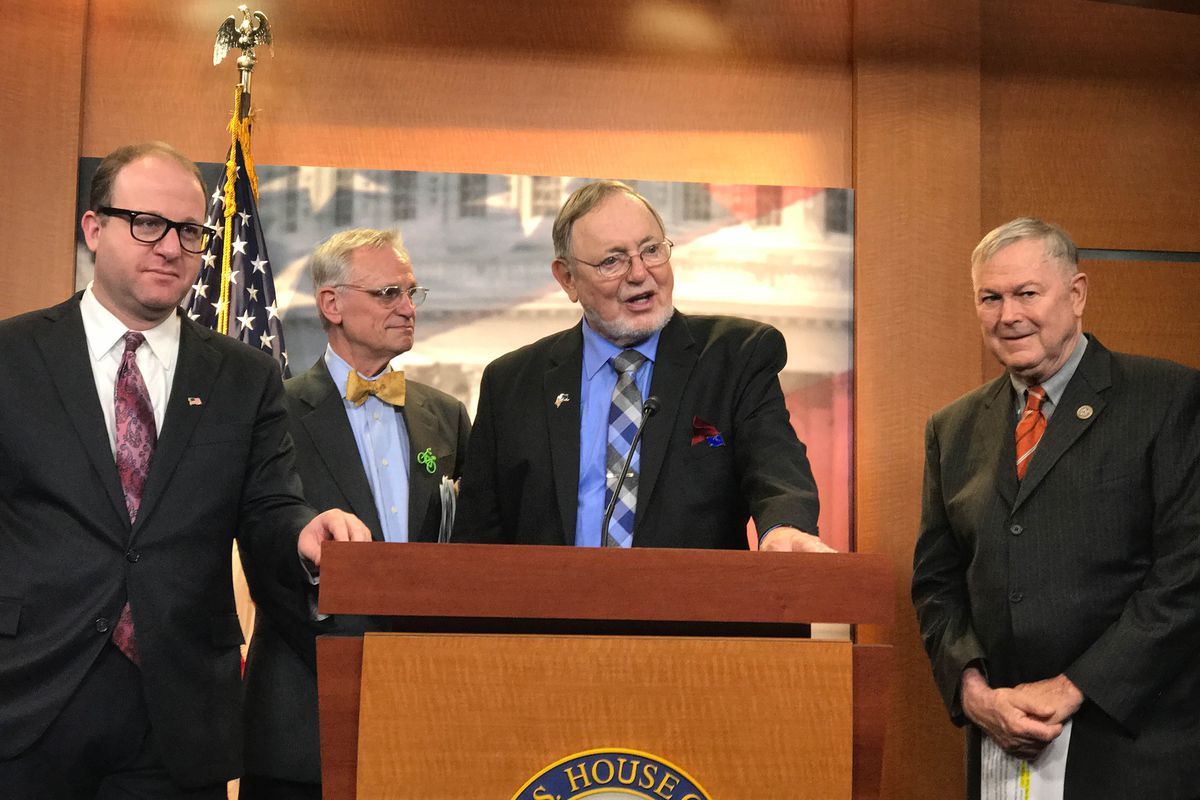 WASHINGTON — Alaska's sole congressman, Don Young, on Thursday co-launched the House Cannabis Caucus with three other lawmakers, vowing to pursue changes to banking and other federal laws that stand between states and autonomy over the marijuana industry.

Young joined with Reps. Earl Blumenauer, D-Ore., Dana Rohrabacher, R-Calif., and Jared Polis, D-Colo., to say they formed the coalition to focus on advancing legislation to put managing marijuana squarely in the hands of states.

Alaska, Oregon, Colorado and California are among the eight states and the District of Columbia that have legalized marijuana for adult recreational use. Forty-four states have legalized varying forms of medicinal marijuana.

Young said he helped launch the caucus as a conservative Republican who believes deeply in states' rights.

"Alaska voted to legalize it — pretty large margin — and I believe in states' rights and the federal government should stay out of it, period," he said Thursday.

But cannabis is a Schedule I drug to the federal Drug Enforcement Agency, meaning it has "no currently accepted medical use and a high potential for abuse." Other Schedule I drugs include heroin, LSD, ecstasy and peyote.

For several years, congressional amendments have stopped the federal government from spending any federal money — including on enforcement — to supersede state and local laws allowing use of cannabis. But there are many issues that remain for marijuana to be a legal industry.

Young said he's particularly interested in managing the banking problems the industry faces. Banks are reluctant to take money from businesses that are illegal under federal law, relegating the marijuana business to an all-cash affair — including paying taxes.

"I've been around a long time and I've watched where a great amount of surplus cash is available, it causes lots of sideline problems. And my goal it to make sure … (marijuana company owners) can run it as a business, they can get loans from banks and put the revenue back into the banks as every other business does. I think that's crucially important to make it work correctly," he said.

Other issues raised by members of the caucus included promoting federal research into cannabis; ensuring military veterans and others have access to medical marijuana when needed; and changing tax law to allow marijuana businesses to write-off their business expenses.

Marijuana businesses "cannot, because of a provision called 280-E, fully deduct their business expenses, requiring a much higher effective tax rate. And they have to pay those unfair taxes with cash, because of the banking prohibition, which is insane," Blumenauer said.

Last year, an amendment was passed by both the House and Senate that would allow the Department of Veterans Affairs to work with medical marijuana where it is legal, but it "somehow got lost in the backroom-dealing in the last Congress," Blumenauer said.

Members of the new caucus acknowledged new Attorney General Jeff Sessions, as a senator, did not agree with them on drug policy. But they noted President Donald Trump expressed a preference for state control of marijuana policy on the campaign trail.

"We're hoping given that now (Sessions) works for the president, he'll maintain those policy commitments that were made during the campaign," Polis said.

But the four also said they hoped the opinion of an attorney general would not matter if they are able to change the laws.

"The Congress is the one that makes this country run, if we do our job," Young said. "So I'm very happy with the idea that we butt heads, if we have to, with the attorney general. We'll do our job, because it's the right thing to do, and when you're right, you'll get it done."

Democrat Blumenauer noted "we needed Mr. Rohrabacher's amendment (to prevent efforts to enforce federal marijuana laws) with the Obama administration. There are 93 U.S. attorneys out there, and so this is something we need to do regardless of who's attorney general or not."

Young noted the unusual makeup of the bipartisan group. Within the hour before they joined together in a press conference, Blumenauer had been on the floor railing against a bill to repeal a fish and game regulation Young had sponsored. Young joked that Polis had called him a "puppy killer" over the wolf-hunting regulation.

"We can disagree on other things, but it's good to work on something that we believe is good for the country and good for those states," Young said.

"These are areas that should not be necessarily partisan. They're not complex. They'll make a big difference for the industry," Blumenauer said.

Despite the group's focus, each said they had not ever used marijuana recreationally, recently or otherwise. Rohrabacher is perhaps the only member of Congress to admit to using medical marijuana — a topical salve after having shoulder surgery.

The 83-year-old lawmaker said he expected other conservatives to join him in the cause.

Alaskans voted to legalize the sale and taxation of marijuana in the November 2014 general election, and the state's first pot shops opened in fall 2016.

None of Alaska's all-Republican congressional delegation — Sens. Lisa Murkowski and Dan Sullivan, in addition to Young — supported the measure. But they all say it should be the state's right to decide, without federal interference.