Have you seen something in the sky you can’t explain? This Alaska UFO researcher wants to hear about it. 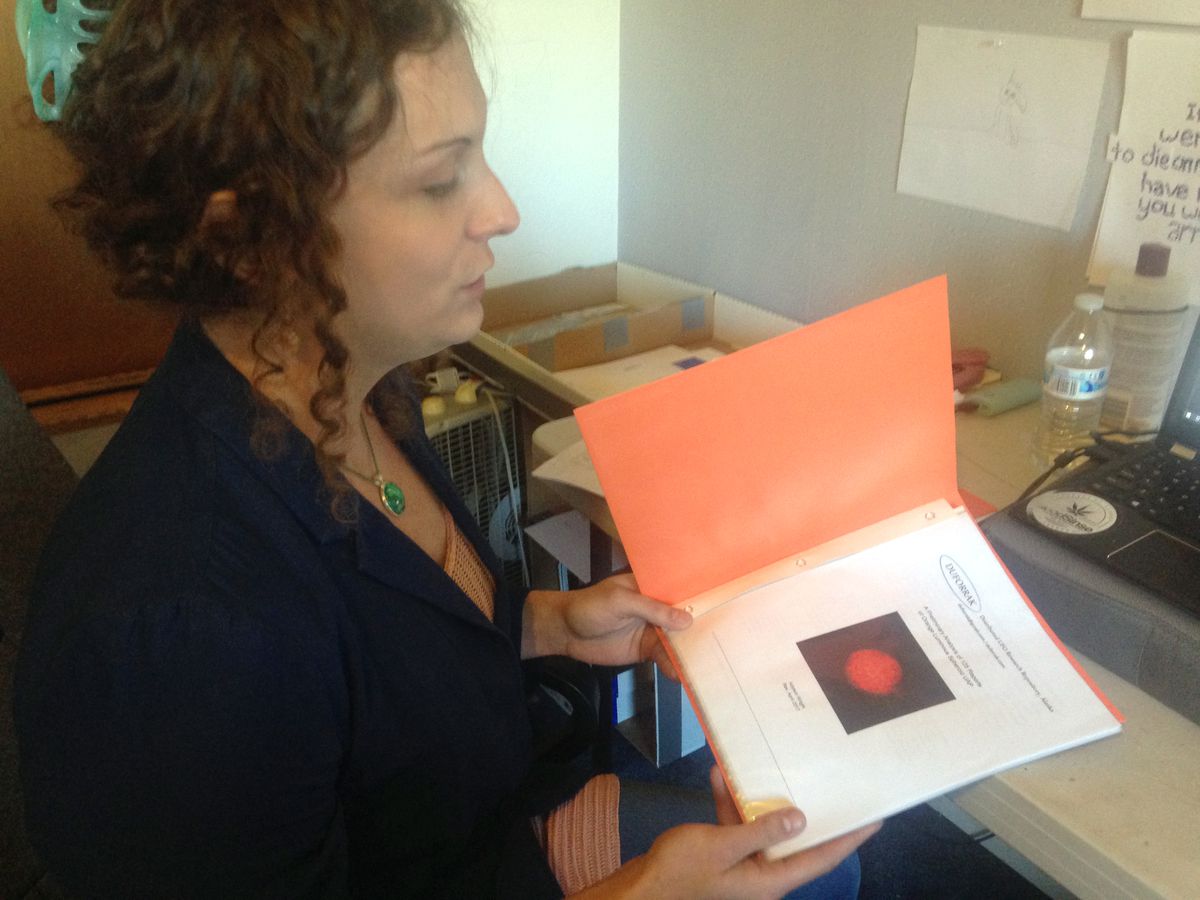 NORTH POLE — A few years ago, Adyson Wright was told a story she couldn't believe.

A family member said he'd seen a UFO when he was about 12 years old, driving home one night with his aunt, uncle and brothers.

"As they were driving he sees three metallic saucers in the sky, following their car. His aunt was scared and apparently she floored it," said Wright, sitting in the study at her North Pole home on a recent fall afternoon.

"She gunned it home, crashed through the gate — a newly built gate at their fence, which bugged his parents apparently — and even ran inside and grabbed a shotgun and shot at them," Wright said. "And they zipped away, and that was it."

It was a pretty outrageous story, Wright said.

"My first thought was that he was just telling a tall tale. I said, like, 'there's no way you saw that,' " Wright said.

Wright — who studied environmental monitoring and worked as a forestry field technician before returning to school for computer network security — started doing some research. She says she fell down the rabbit hole.

"Sure enough, the more I tried to prove it didn't happen, the more I found proof that it probably did," Wright said.

Attempts to disprove a family story led to its own unexpected conclusion: the creation of an Alaska UFO research database, which Wright hopes will lend rigor to a field that she says is overlooked by scientific inquiry, and fraught with speculation and poor reporting.

On her website, Distributed UFO Research Repository, Alaska, Wright has been gathering cases, writing papers and coming up with projects to help expand knowledge about UFOs based around solid reporting.

Over the past two years, Wright has built up the website in her spare time, spending at least 15 hours a week on the project.

She's created what she says is a "case deliberation method" — a four-page event description with its own scoring system — to try to weed out reports of balloons, meteors, drones and everything else that passes overhead and might look spooky, but can be explained.

In her various databases, she's cataloged around 1,400 cases globally, ranging back to the 1800s. Of those, around 150 are what she considers "usable," where the anomalies outweigh normal explanation.

Witness accounts that can be verified through instrumentation, like radar, are the most interesting to Wright.

"A lot of people think photographs are the smoking gun evidence, but considering the phenomenon and how difficult it is, how rare it is to observe, radar and spectral analysis and stuff like that is the best information we have," Wright said.

In June, Wright wrote an analysis of Alaska sightings, comparing them to other areas, and found that, unlike many places, Alaskans report seeing UFOs more in the winter than summer.

For her next project, Wright is hoping to get in touch with people working at rural airports. Pilots and air traffic controllers are some of the most reliable witnesses. So she's sending out letters to dozens of airports to "get closer to the communities and compile as many sightings as I can," Wright said.

[Lights in the sky and mysterious gravesites: Seeking the supernatural in Western Alaska]

At home in her study, a telescope sits by the window. Wright says she's always been a "space nut."

But what are UFOs? There are plenty of theories — aliens, time travelers, military technology. Some are more outlandish than others. Wright isn't betting on any of them.

"Speculation only gets you so far in this," Wright said.

"The only theory I've subscribed to is that (UFOs) are anomalous and worth studying," she said.

One case she finds interesting is a video taken by Fairbanks man Jared Augustine last year. He was working his shift as a security officer outside of the Morris Thompson Cultural and Visitors Center when, around 3 a.m., he noticed a blinking light in the sky.

He saw something drop from the light, so he pulled out his cellphone. His video recorded what appears to be a separate circle drop two more times from the blinking light, around minute 1 and 2:30.

Wright likes this video because it shows apparently anomalous behavior — a second light seemingly emanating from the first — which mirrors other UFO sightings from past decades, and defies many conventional explanations.

Could it be a drone? It's "one of a few likely explanations," Wright wrote in an email later. She said she reached out to organizations that might have had a drone out in the sky that night, but with no success.

Augustine says Wright reached out to him about a month after he posted his video on YouTube. He's happy she's doing the research. Scientific study is "better than tin foil hats," he said.

His YouTube video made some waves when it was first published; he was contacted by a couple of media groups.

"A lot of people say that it's fake, but that's why I left it up to them," Augustine said of his video.

Regardless, the video has become an interesting study among Wright's research. And overall, her projects have taken some mystery out of the bizarre things people see in the sky.

"Now I have an explanation for everything and nothing is strange to me. But it sure is exciting when I pull up a good case," Wright said.