On Anchorage land razed for the Knik Arm bridge, an orchard offers its first harvest 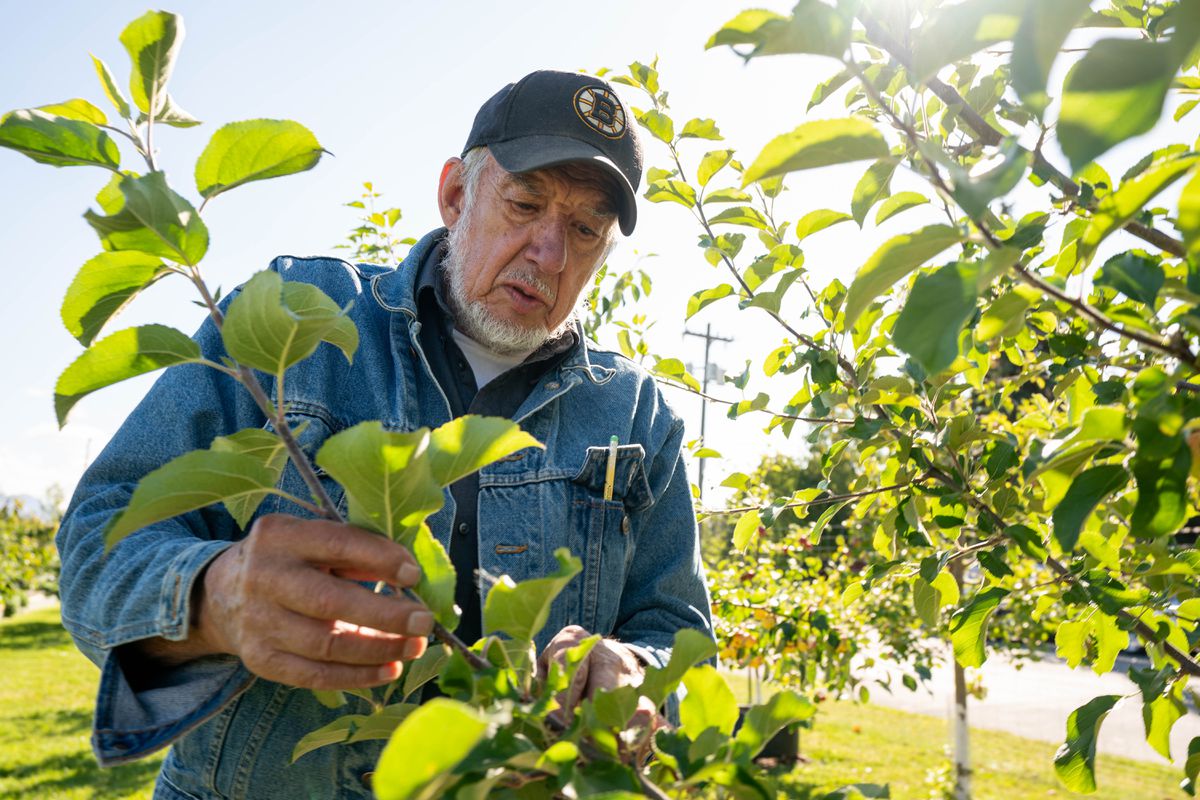 After years of planning, planting and pruning, a group of Anchorage residents pressed their first large batch of juice from the Government Hill orchard on Wednesday.

Around a dozen board members from the Government Hill Commons, which manages the orchard and the roughly 2 acres upon which it sits, gathered to pick apples for gift baskets and to press the fruit with a donated cider press.

“We’ve come a long way in five years,” said orchard manager Paul Lariviere, 80, who spends most days at the orchard tending to hundreds of trees. The small plot boasts 53 varieties of apples and 17 varieties of pears, as well as cherries, plums, grapes, strawberries and even peaches.

In the spring of 2015 the land where the orchard now stands was the site of the former Sourdough Lodge. The building and others nearby were razed to make way for a bridge over Knik Arm, a controversial megaproject that was shut down in 2016 by then-governor Bill Walker.

Lariviere started grafting apple trees for the orchard in his garage in the fall and winter of 2015, and the next spring many of them were moved to a temporary home nearby while work continued on the site. The following year the trees were moved into pots, then to a quonset hut, and finally into the first raised bed.

“It’s a lot of work,” said Lariviere. “But it’s worth it, anyway, for me it’s worth it. Sometimes I’ll come out here on a Sunday afternoon and just walk around, and I’m pretty amazed.”

Today the orchard is far more than fruit trees. Organizers hope to start a sculpture garden in 2021, and they also have plans to create a community garden and possibly create what Government Hill Commons board member Steve Gerlek calls their version of the Rustic Goat, a popular West Anchorage restaurant and coffee shop.

Lariviere and others are constructing a fence out of pear trees and sculpting roses into an elaborate arch. They have provided flowers and empty beehives that they hope will be colonized by native bees and other pollinators.

“Last year, there was no fruit on this whole row except for this last tree,” said Lariviere, pointing to the first raised bed, which was planted in 2017. This year the row is full of trees bursting with apples.

Gerlek also takes a long view when thinking about the future of the orchard.

“The oldest pear tree in North America is in Danvers, Massachusetts, which is near where I grew up,” he said. “It’s 298 years old, the pilgrims planted it and it’s still there, and it still bears fruit.” (According to the New England Historical Society, the tree is actually older, planted sometime between 1630 and 1649, which makes it closer to 400 years old).

“This neighborhood has been here for 100 years," he said. "There’s no reason why, in the next hundred years, that this could be a feature that still exists. It should outlast us, that’s the whole point.”