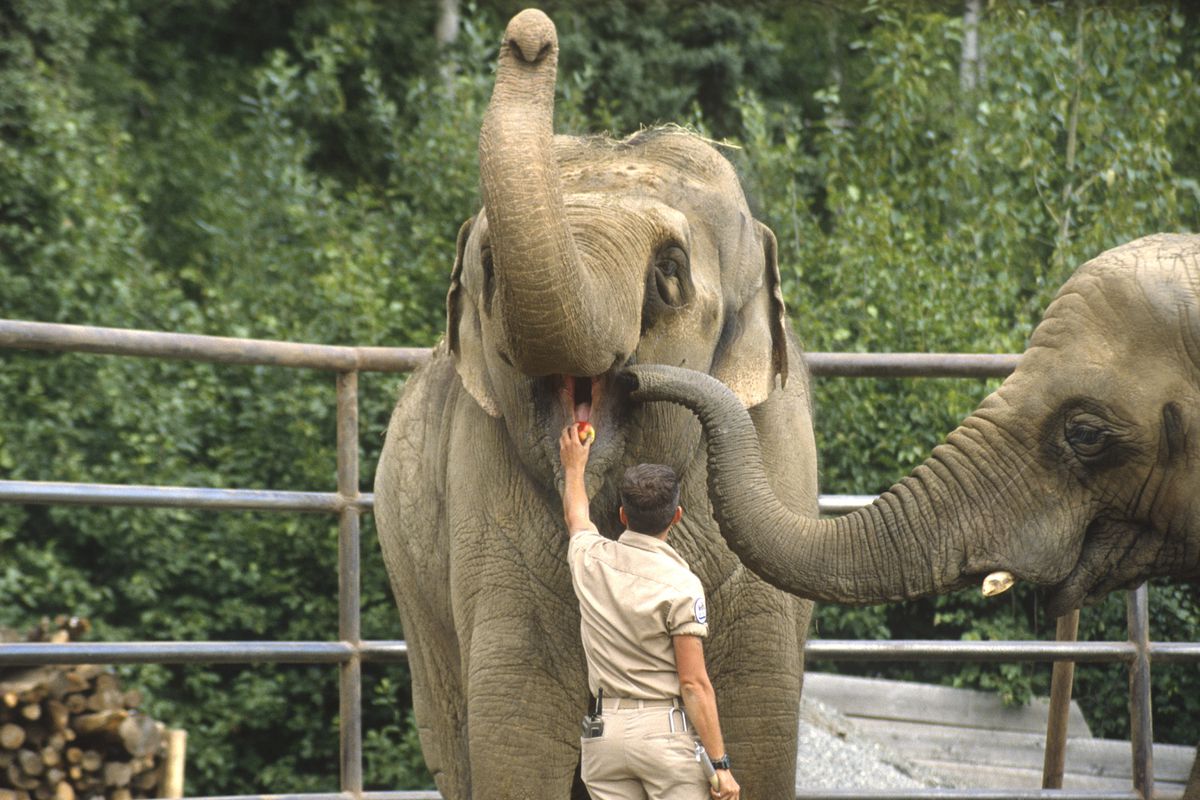 Rob Smith, elephant manager at the Alaska Zoo, offers Annabelle an apple as Maggie, a 14-year-old African elephant, tries to intercept the apple. Annabelle celebrated her 33rd birthday with treats from children Thursday, July 17, 1997. Annabelle is an Asian elephant from Bangkok, Thailand. She was born in captivity and brought to the United States for a circus. Circus life wasn't for her and she ended up being a contest prize for a man who had a choice between toilet paper and a baby elephant. Annabelle was a year and a half old when she came to the Anchorage Zoo in 1966. (ADN archive / Terri A. Long Fox)

Rob Smith, elephant manager at the Alaska Zoo, offers Annabelle an apple as Maggie, a 14-year-old African elephant, tries to intercept the apple. Annabelle celebrated her 33rd birthday with treats from children Thursday, July 17, 1997. Annabelle is an Asian elephant from Bangkok, Thailand. She was born in captivity and brought to the United States for a circus. Circus life wasn't for her and she ended up being a contest prize for a man who had a choice between toilet paper and a baby elephant. Annabelle was a year and a half old when she came to the Anchorage Zoo in 1966. (ADN archive / Terri A. Long Fox)

It was June 1966, a university farm in Fairbanks. The 40 musk oxen and a solitary moose calf lived a placid, pleasantly repetitious summer life of scheduled food, shade and sleep. Into their tranquil lives stomped what the long-term residents might have considered a monster. A gray, nearly 400-pound child that demanded all the attention. Her long, prehensile snout searched pockets and opened doors. Her trumpeting cries ripped apart the pastoral serenity. The farm had been invaded by Annabelle the elephant.

Annabelle (1964-1997) was a prize, literally. Earlier that year, paper products manufacturer Crown Zellerbach ran a promotion for their Chiffon Tissue. Whichever grocery store sold the most toilet paper won their choice of $3,000 (about $24,500 in 2020 dollars) or a baby Indian elephant. Jack Snyder, owner of the two Anchorage S & F Foodland grocery stores, won and chose the elephant. From this sitcom-quality beginning, Anchorage soon gained not only a zoo but one of its most famous artists.

The elephant part of the contest was a joke. The winner was supposed to politely laugh at the humorous option and then take the money like a good American capitalist. As a Crown Zellerbach representative said, “No one ever expected a grocer to choose an elephant.” The promotion was, like many other publicity-seeking contests, a longtime staple of American marketing. Notably, in 1949, Fred Meyer announced they would give away a “healthy two-month-old baby” at their Portland grand opening. Churches protested, but a crowd filled the store anyway, eager to see the drama play out. And management dutifully handed the winning couple a 2-month-old chinchilla. Compared to a baby giveaway, an elephant was nothing.

And yes, the story of Annabelle to this point is remarkably similar to a plot from the long-running animated series “The Simpsons.” In a 1994 episode, “Bart Gets an Elephant,” Bart won a radio contest with his choice of $10,000 or an elephant. As with the Crown Zellerbach promotion, the elephant part of the offer was a joke that no sane individual would choose. However, Bart demanded the elephant. Public pressure eventually forced the radio station to deliver a full-grown elephant, Stampy.

No Simpsons writer or showrunner has publicly commented on their elephantine source material. Someone connected to the show may have heard of Annabelle. However, the most likely inspiration is a far more famous episode of “The Price is Right.” In 1956, even before Bob Barker’s tenure as host, the show brought an elephant onto the stage as a prize. The show offered the winner $4,000 instead, but he insisted on the elephant, like Jack Snyder and Bart. After some initial reluctance, show management flew in an elephant from Kenya.

The importer who brought Annabelle into America named her after his wife, meant as an insult to both. Apparently, both women had a reputation for stubbornness. A circus bought the young elephant but promptly returned her to the importer as untrainable. When the Crown Zellerbach people came looking for an elephant, the importer was thrilled to relieve himself of the burden.

Fairbanks was Annabelle’s first Alaska destination. Her time on the farm was meant to allow her time to acclimate before being shipped down to Anchorage. Meanwhile, Snyder thought himself a genius. As he saw it, he stood to gain far more than $3,000 worth of publicity out of the elephant. If worst came to worst, he could donate her to the new zoo under consideration for Russian Jack Springs Park.

By July, Annabelle was in Anchorage making appearances at Foodland and other local stores. Yet, the costs quickly overtook whatever promotional gains made by Snyder. She was a hungry, growing girl, gaining as much as 60 pounds a week. In addition, the Russian Jack zoo organizers were only interested in Alaska wildlife, though that project itself failed.

At night, or whenever not standing outside a store, Annabelle was housed at the Diamond H horse ranch on O’Malley Road owned by Sammye Seawell and her then-husband, Howard Taplin. Soon enough, Snyder simply donated the elephant to Seawell.

Seawell (1919-2019) was quickly building a reputation for her menagerie. Apart from the horses and a dog, she adopted an orphaned harbor seal, Oley, in 1960. Then came Annabelle. And in 1969, Alaska State Troopers dropped off the also-orphaned Tuffy, a black bear cub.

Annabelle lived in the only heated horse stall, then moved to a more permanent, custom home at the front of the ranch. Her social schedule remained busy, including various children’s events, boat shows and retail appearances. When Maryland governor and future disgraced Vice President Spiro Agnew visited Anchorage in 1968, she was there to greet him at the airport, a living symbol of the Republican Party.

Annabelle’s first brush with national attention came not for her singular status as an elephant in Alaska but her stylish footwear. Seawell worried that her feet might be pained by the ice and snow and tried to make her some shoes. An attempt with canvas bank-deposit bags failed miserably. Local disc jockeys ran with the story, and Seawell was deluged with custom knitted, crocheted and felt pachyderm booties. Soon the story was crossing the country.

The final resolution to Annabelle’s foot woes marked her as a real Alaskan. A game farm donated oversized leather mukluks, equipped with buckles to avoid catching on her bristly hairs and worn over thick red stockings. Thus, was born the inspiration for the classic Alaska children’s story “Mukluks for Annabelle,” by Dianne Barske.

“You have to get your long underwear on and your winter clothes ‘cause you don’t have a chance to go back in after you get her ready. I would go out in the horse stall, which was heated. And put the four stockings on. And the four boots on. And buckle those things. I would be dripping wet with sweat, absolutely dripping . . . [Annabelle’s] trunk into everything all the time while you’re putting them on, her trunk is all over you.”

Along the way, Seawell became a founding force for the Alaska Children’s Zoo, later renamed the Alaska Zoo. The zoo opened in 1969 on 5 acres bordering the Diamond H ranch. Annabelle, Oley and Tuffy were the zoo’s first stars. Among the other founding residents were other eclectic former pets, including an ocelot, Arctic fox, and a Sicilian donkey. The ocelot proved unruly and was shipped out to the Portland Zoo. Admission was $1 for adults and 50 cents for children.

Many thousands of Alaskans have sweet childhood memories of Annabelle, but Alaska is not the best environment for an elephant. The Alaska Zoo, with ongoing budget restraints and an evolving mission, did the best they could. Female elephants are social creatures, so they imported the 1-year-old Maggie, an African elephant, as Annabelle’s companion in 1983. A new trainer introduced Annabelle to painting in 1990 as a form of intellectual exercise, and she once more became a sensation. By 1991, her paintings were selling for hundreds of dollars. One of her brushes, shockingly small in scale to an elephant, is on display in the Alaska Zoo’s gift shop.

Though Seawell proved accusations of Annabelle as untrainable wrong, the elephant remained temperamental. In 1984, a teenager jumped a fence and ran toward Annabelle. She headbutted him, knocking him unconscious. Three years later, she slammed a zookeeper against a wall. The long winters, which Annabelle and Maggie spent locked inside a paddock, did not improve their moods.

Annabelle died in 1997, still relatively young for an elephant at 32. For over a year, she suffered from a severe infection that eventually spread into her bones and bloodstream. The zoo finally had to euthanize her. Seawell, in her 80s and still the zoo director, was there for Annabelle’s last moments, stroking her trunk.

By then, Alaska Zoo policy only allowed animals native to Alaska. There would be no companion for Maggie. In 2004, the zoo commissioned a study, and 10 of 11 elephant experts recommended she be moved to a warmer facility with other elephants. However, the zoo’s board, and Seawell herself, were divided on whether to ship Maggie Outside.

Public outcry toward the zoo intensified as Maggie’s physical and mental condition rapidly deteriorated in the years after Annabelle’s death. Within a few years, Maggie became lethargic and weak. If she fell, she was unable to recover without assistance. Sometimes, she dragged herself across the paddock floor, tearing her skin open. In 2007, she was finally relocated to the Performing Animal Welfare Society (PAWS) Wildlife Sanctuary outside Sacramento. By all accounts, Maggie has loved her new life. No more chains or snow, she can now run around, up and down hills, and enjoy the company of a herd. In one last bit of serendipitous coincidence, Maggie’s fate recalled that of the Simpsons’ Stampy, who was also donated to a wildlife preserve.

Special thanks to Dianne Barske and Sandy Harper for their assistance.