In North Pole, Alaska, Santa Claus is a bastion of blue on a city council as red as Rudolph’s nose 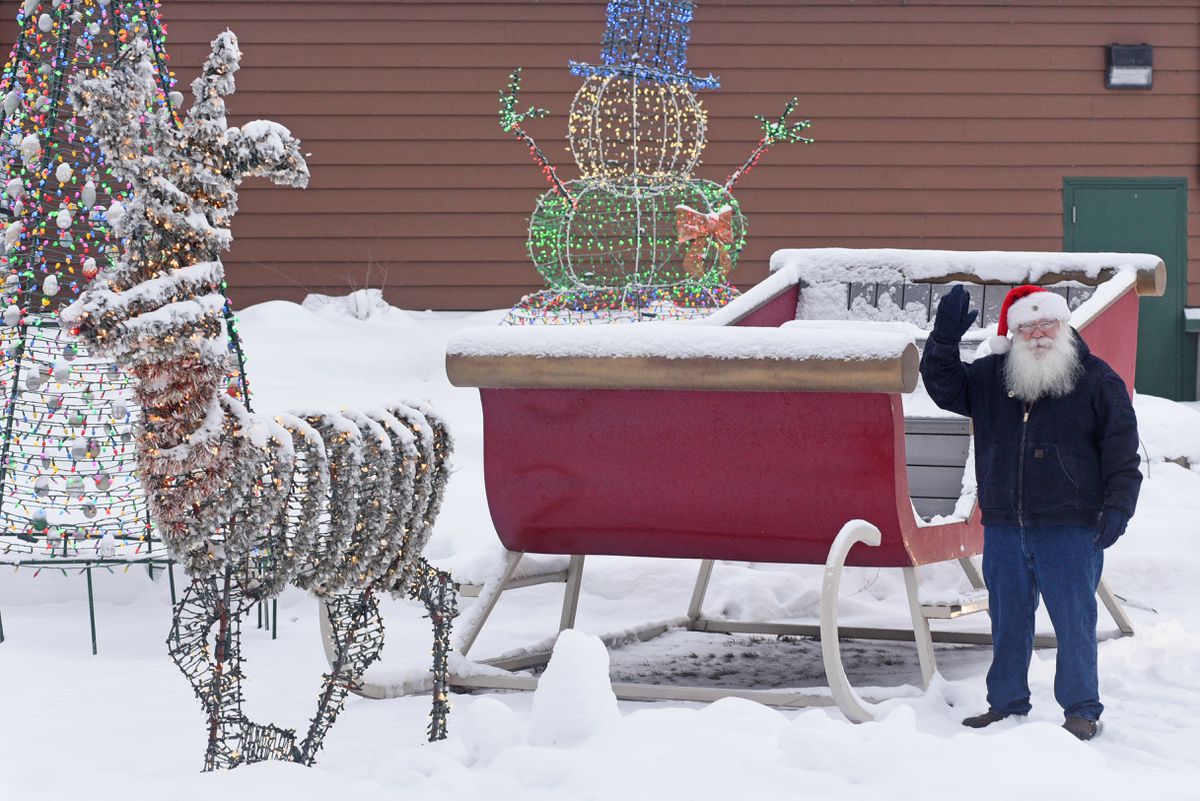 First things first: Yes, Santa Claus is his legal name. It’s on his government identification, and the mail that arrives at his apartment.

A long time ago, he was called Thomas O’Connor. He doesn’t answer to that name anymore. If someone shouted it in the North Pole Safeway, “I wouldn’t even turn my head,” he says.

This Santa Claus is a 73-year-old medical-marijuana-using, Bernie-supporting vegetarian monk who lives at the poverty line, does not drive and thinks — truth be told — that Christmas is a “crass commercial secular spectacle.”

He owns a Santa suit but dreads wearing it. He’d rather don his crimson monk’s robe. When children approach, asking for Xboxes, he tends to take them on a rhetorical journey about the very nature of gift giving. It ends like this: Love is the greatest gift of all.

He’s not the only person to take on the moniker Santa Claus in the United States, or even in Alaska.

But this Santa Claus is the only one who committed to the role so fully that he moved from Nevada to North Pole, a Christmas-themed burgh of 2,200 southeast of Fairbanks.

These days he’s a left-leaning city council member in a town redder than Rudolph’s nose, trying to get through a strange holiday season of the coronavirus pandemic like the rest of us.

“It’s love versus fear,” he said. “Fear is what a lot of people are feeling these days. I tend to concentrate on the love.”

His biography is larger than life: He had a Christmas-loving childhood in a three-story brownstone in Manhattan, part of a loving family with four kids.

The way he tells it, he spent college and graduate school studying film at New York University while working as a bar bouncer on the side. His interest in film led to an unexpected career in law enforcement, first as a videographer for the New York City Police Department, capturing mayhem in gritty 1970s New York.

His law enforcement career led him to a research center on terrorism, which he says warned government organizations and multinational corporations about nascent threats that he has watched come to pass. There are some parts of the pre-Claus life he glosses over. He was married at one point. He has a stepson, in his 40s now.

In the meantime, he was seeking spiritual truth: He studied Surat Shabd, an esoteric form of light and sound meditation practice, lived in a handful of ski towns and discovered Celtic spirituality, ultimately joining an order of Anglican Christian monks called Anam Cara, which means “soul friend.”

He took a vow of poverty, and embarked on a simpler life. That led to odd jobs as a church groundskeeper in Incline Village, Nevada, near Lake Tahoe. He lived in a Ford Expedition or vacant church offices. A kind couple from his church invited him to stay in a spare bedroom; their home turned out to be a mansion overlooking Lake Tahoe. He stayed three years.

It was around this time he started to really resemble Santa Claus — rotund, ruddy, bewhiskered and naturally twinkly. He felt his purpose in life emerging: In law enforcement, he had encountered children who “fell through the cracks” of legal and foster care systems. He decided his spiritual ministry would be advocating for “child health, safety and welfare.” Who better to do that than Santa Claus?

He had no interest in doling out candy canes at department stores in a polyester suit. He wanted to follow the ancient example of St. Nicholas, the precursor to the modern Santa Claus figure. St. Nicholas was the patron saint of children (as well as pawnbrokers, repentant thieves, the unjustly condemned and prostitutes, among others) and known for his benevolence and care for the dispossessed and unpowerful.

“Kids get the short shrift — whether environment, housing, food, clear and clean water — it all affects children,” Claus said.

Then came the moment of spiritual epiphany in February of 2005, when he was walking to the post office in his snowy mountain town, praying about what he should do with his increasingly Santa Claus like appearance. A man drove by, rolled down the window and yelled “I love you Santa!” out the window.

He went to Washoe County Superior Court and applied to change his name.

Claus then went on a 50-state tour, visiting state legislatures and officials to lobby for money and policy changes toward child welfare. He called it the “Santa Bless the Children Tour.” It garnered media attention, and in 2009, he won an award from the Santa Claus Peace Council in Antalya, Turkey. He ran for president twice, with the slogan: “Santa Claus for President: Restoring America’s Heart and Soul.” He says he spent no money on either campaign.

His platform, in a 73 words: “I detest government policies that endanger child health, safety, and welfare, that pollute our Creator’s environment, that discriminate against the weak, the poor, and the underprivileged, that fail to recognize that science, education, and religion can co-exist, that separate, rather than unite, that promote war, rather than peace, that favor pharmaceutical sales over natural remedies, that diminish compassion, and that fail to recognize that love, not fear, is the greatest power on earth.”

A few years later, he decided to move to North Pole, Alaska, a place he had never been before. He figured it would make him unignorable: Calling legislators and governors, he would be able to truthfully present himself as Santa Claus of North Pole.

There are dozens of people in the United States who have legally renamed themselves Santa Claus. There’s a Santa in Layton, Utah; a Santa Claus in Florida who declared bankruptcy in 2018; and a Santa Dwight Claus in Amarillo, Texas. There’s also another Santa Claus in Alaska, given name Erik Burton, who in 2018 petitioned the Anchorage Superior Court to change his name to Santa Erik Claus — apparently to enhance his San Jose, California-based Santa-for-hire business. But as far as Claus knows, he’s the only person named Santa Claus in North Pole.

One unexpected consequence of moving to Alaska that his advocacy hook seems to be less potent here, where people know North Pole as a town near Fairbanks, not particularly populated by elves and reindeer.

“If I call somebody up here and say, ‘Hey, it’s Santa Claus from North Pole,’ they couldn’t care less,” he said.

When Claus moved to North Pole, he jumped into civic involvement, becoming the president of the local Chamber of Commerce. In 2015, he ran for and was elected to the city council, garnering international media attention. He ran for a second term on the council last year. He says he does it because he wants to be of use to his community.

His political viewpoint is several degrees to the left from the town he lives in, where roughly 72% of voters supported Republican President Donald Trump in the 2020 election. Consequently, Claus finds himself at odds with some in local government about issues ranging from masks to cannabis.

“I was a Bernie supporter,” he said. “This community is a bit different from Bernie.”

For a while, he used his considerable social media following to make some satirical jabs at President Trump, whose policies he despises. But he started to wonder just how much he should share his political opinions online.

“For a while, I was getting after Trump all the time,” he said. “His policies affect children. I came at him pretty hard, as Santa Claus. Then I thought, I better just close up the old website. It’s better to be positive.”

Recently, he has butted heads with other members of the council about wearing masks during the pandemic. Some have publicly criticized the fact that Claus lives in a subsidized low-income apartment. He counters that he took a religious vow of poverty, volunteers more than 1,000 hours a year and makes $300 a month serving on the council.

He makes political endorsements (yes on Ballot Measure 1, yes on Ballot Measure 2 and he endorsed the Joe Biden-Kamala Harris ticket after his favored candidate — Sanders — dropped out of the 2020 presidential race). Most of what he worries about on the city council are intensely local issues, such as groundwater contamination problems and the city’s exposure to legal liability. He would like to see North Pole allow the sale of cannabis, so he wouldn’t have to take the bus to Fairbanks to get the THC products he used medicinally.

Even if they don’t agree with him, his council colleagues have generally positive reviews of Claus.

“He’s a reasonable person to work with,” said David Shipps, a council member.

Today, Claus lives in a nondescript beige apartment building, near the post office and a light post that looks like a candy cane. This Christmas season, his pandemic days are quiet. He won’t be seeing much of other people: Over 70 and a cancer survivor, Santa Claus is at high risk of serious illness from COVID-19.

Instead, he meditates. He takes walks with his traction shoes and his cane, he Zooms and calls people, advocating for child welfare. He prepares for city council meetings. He still wanted to reach out to his most loyal constituency this constrained holiday season, so he filmed a video where he addresses children directly, Mr. Rogers style, about what they might be feeling in a season of stress and worry amid the pandemic.

In the video, he wears silver eyeglasses and a button up blue shirt, no Santa hat, no red suit. He tells all those kids out there on screens that they are wonderful and special, that this hard time will end, that the world needs them and that Santa Claus, way up in North Pole, loves them.