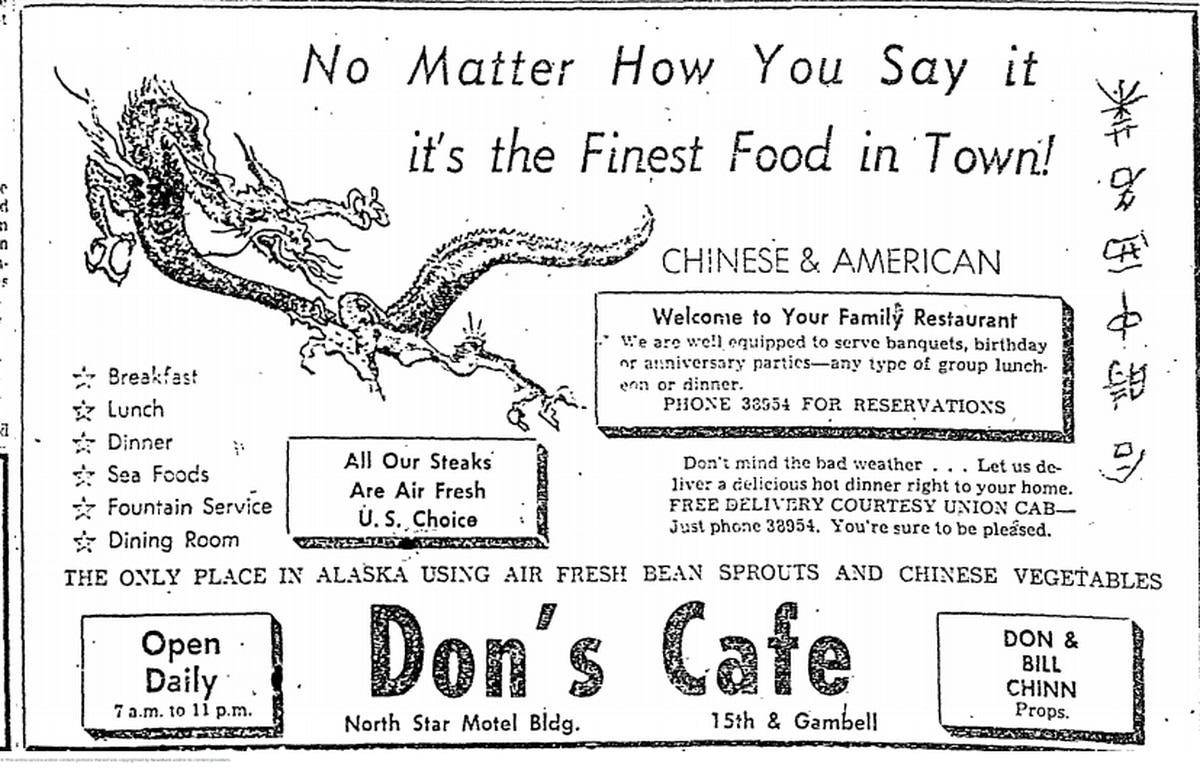 1956 advertisement for Don's Cafe in the Anchorage Daily Times.

1956 advertisement for Don's Cafe in the Anchorage Daily Times.

After a recent article on street name origins in Anchorage, several readers wrote in about other uniquely named Alaska roads. For example, there is Four Wheel Drive in Chugiak. Karl Voiles wrote, “My brother’s first home was in Peters Creek. The road going in was horrendous, so my brother and his few neighbors got together and called it ‘Four Wheel Drive.’ The name even became official and remains so today.” Another reader pointed out Whigmi Road near Talkeetna. Whigmi is an acronym of “What have I gotten myself into.”

The article mentioned Outta Place in Anchorage, and several residents along it wrote in about the name’s origin. It was first called Doris Place. However, that was deemed confusing given the nearby Doris Street. Sophie Littée wrote, “Our little street is kind of tucked away, and it sort of feels like we are in outer space sometimes then we thought we were not in outer space we’re just ‘out of place.’ Outta Place had a ring to it we all liked. And so we submitted it. In the end, out of 28 homeowners, only seven people voted, and five of them voted for Outta. It was low voter turnout, but it was democracy at work!”

[Histories of Anchorage: Why isn’t there a J Street? And other reader questions]

An important part of this series is the interaction with Alaskans, and I have answered around 900 reader-submitted history questions in the past year. The questions have ranged from the personal to the global, from family histories to pandemics. A couple of clever students even asked for help with assignments. The following are some of the best questions and answers.

I just moved into Airport Heights, and my home inspector mentioned that the military built (or had built) the homes in the neighborhood, and that’s why so many of them are so similar. I was curious if that was the case and, if so, how the military used the neighborhood (was it the primary spot for military families? etc.) and for how long.

Many of the homes in Airport Heights look the same because they were prefabricated. The original subdivision that grew into the neighborhood was constructed with kit homes produced by the contracting agency out of Oregon. These were not Sears kit homes despite what some residents think. Sears had been out of the kit home business for about a decade when the ground was broken on Airport Heights in 1952.

In 1955, the brand-new Airport Heights Elementary school opened, and we no longer had to go half days. But around Halloween, one of the other elementary schools burned, and we had to share our school, back to half days again. I’ve never have been able to find the story about that fire.

This reader has an excellent memory. Indeed, Airport Heights Elementary was dedicated on Sept. 26, 1955. And on Halloween night, Talkeetna School in Mountain View burned to the ground, a total loss. By Nov. 4, the students were reassigned to Airport Heights Elementary, and new bus schedules were created. In other local school news around that time, West High was dedicated on Nov. 6.

The former Talkeetna School students were eventually split between Airport Heights and Denali Elementary. The Mountain View School finally opened as a replacement for the Talkeetna School in January 1958, more than two years after the fire.

My husband and I were trying to remember the name of the Unofficial Ambassador of Alaska from back in the ’80s. He would tour throughout the state and nation touting all things wonderful about Alaska. Do you remember his name?

You are talking about Larry Beck, the one-man show, poet, Miss Alaska host and tour guide leader who died in 1990. He was first gifted the title of Goodwill Ambassador of Alaska by Governor Keith Miller in the late 1960s, and subsequent governors renewed the admittedly unofficial honor.

Did Elvis Presley visit Alaska when he was in the Army?

Unfortunately, I can find no evidence that he visited Alaska during his Army tenure. His military career was pretty straightforward, from training at Fort Hood, deployment to West Germany, then back to New Jersey, where he was discharged. Also, Alaska is one of nine states where he never performed. He also never performed in Delaware, Idaho, Montana, New Jersey, North Dakota, New Hampshire, Vermont and Wyoming.

What was the story about the generator ship located in the port area after WWII?

You are talking about the SS Sackett’s Harbor, named for a Lake Ontario port town in New York. Built in 1943, she was a tanker used in the Merchant Marine during World War II. She broke in half near Adak in 1946. The still-floating stern was towed to Anchorage, where it provided power for the rapidly growing city from 1946 to 1955. Eklutna Dam was completed in 1955, and the Harbor was sold. Less well known is that the ship then had a third life. It was rebuilt with a new bow and converted into a wine carrier — the Angelo Petri. The rebuilt ship changed hands and name a couple of times after that and was active into the 1970s.

What was the first Chinese restaurant in town?

The first Anchorage restaurant to serve Chinese food was likely the earliest iteration of the Chop Suey House founded by Japanese-born Yusuke “Harry” Kimura in the 1910s. He later operated other Asian-cuisine restaurants in town including the downtown Golden Pheasant and the Nikko Garden near Lake Spenard.

The first Chinese restaurant with a Chinese chef was probably Don’s Café located within the North Star Motel, what is today the Black Angus Inn at East 15th Avenue and Gambell Street. Chef and founder Don Chinn opened Don’s Café in 1955. He long claimed the Café was the first restaurant in town with a “complete menu of Chinese and American food.” He also advertised the cafe as the only Anchorage restaurant to offer “fresh bean sprouts and Chinese vegetables.”

Don Chinn was born in the Canton Province of China. His father, a United States citizen, brought the 12-year-old Chinn to America in 1935. Chinn grew up working in his cousin’s Yakima, Washington, restaurant before serving aboard a minesweeper in the Aleutians during World War II. Loving the colder weather of Alaska, Chinn moved to Anchorage in 1953 and worked in a couple of restaurants before opening the cafe. He closed the cafe in 1958, but not before opening the larger Green Apple next door in 1956. By 1966, the Green Apple’s popularity had surpassed the small space, and he moved into a new location on East Fifth Avenue.

Were there any famous horses from Anchorage?

Not nationally known, but the most well-known local horse was probably Sid, who was something of a landmark from roughly the mid-1960s through the mid-1970s. He was the last horse allowed to live within the town proper, grandfathered in after ordinance changes. He lived on 15th Avenue east of Ingra Street. Neighbors borrowed him to chew down the grass, especially on the slope down to the creek. People also used him as a navigation reference point, as in, “turn right after Sid.”

Harry Crites bought Sid as a 10-month-old colt for his daughter Donna. Sid lived in Fairview until 1978, when he was 14. That year, Donna and her new husband moved with Sid to the Anchorage Hillside.