Heading home to Hawaii in search of poke 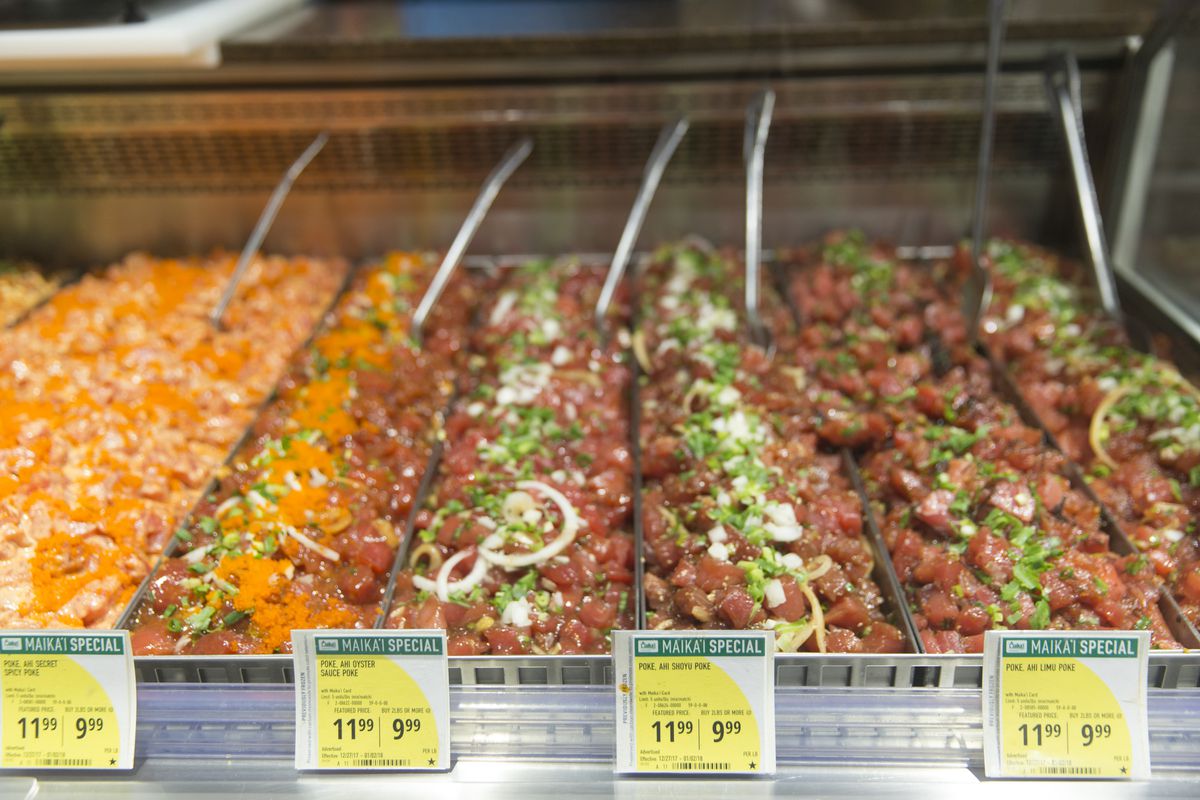 HONOLULU — I can't remember the first time I tasted poke, because in Hawaii, where I grew up, it was always there — in a plastic tub from Foodland or Tamura's or Tamashiro's, tossed on the table as a snack or a side dish. Never the main event, but always essential: pieces of raw fish seasoned simply, with a few strong ingredients to draw out the taste of the sea.

As a New Yorker now, I was hopeful when poke shops began proliferating on the mainland a couple of years ago. I even found one to love, Sons of Thunder in Midtown Manhattan, whose owners have family roots in Hawaii. But elsewhere, the prevailing assembly-line, build-it-yourself model baffled me; there were too many mix-ins and toppings, including oddball interlopers like corn and kale, and the marinades were more like heavy sauces.

What finally sent me over the edge was a highly lauded poke spot in Los Angeles. The fish was dropped into a bowl of marinade, and then the whole bowl was tipped over the rice. The dark stain of soy sauce soaked through, turning everything to salt.

It made me sad to think that this is the only poke some mainlanders will ever know. So on a recent trip home, I decided to try to trace poke to its source: where it comes from, who makes it and how we eat it. I'm not arguing for some kind of authenticity or a return to the "true" poke. There isn't one; grocery stores in Hawaii offer as many as four dozen varieties.

But poke wouldn't exist without the islands' meld of cultures and reverence for the ocean, passed down by the ancients. To learn the history of the dish is to begin to understand a way of life.

Please note that this is not a list of the best poke in Honolulu. Every kamaaina (local) has an opinion on the subject, from my best friend in third grade to my daughter's hula teacher to the doctor who saw my mom at the Kaiser clinic in Moanalua and whose younger sister was in my high-school graduating class at Punahou, because that's how small the islands are. (Mom's fine, by the way.) I just revisited the old standbys and checked in on the new guard, and if I missed your favorite: Sorry, brah.

As Martha Cheng recounts in "The Poke Cookbook," long before contact with the West, Native Hawaiians ate i'a maka, raw fish, kneaded with the fingers (lomi) or cut crosswise in pieces (the literal meaning of the word poke). They added salt to preserve the fish, crunchy limu (seaweed) for texture and brine, and inamona, buttery kukui-nut hearts, roasted and pounded into rubble.

Traditionally the fish came from the shallower waters along the reef. Keoni Chang, the corporate chef of Foodland, a statewide supermarket chain founded by an Irish immigrant in 1948, remembers that his great-grandfather ate poke made of oio (bonefish), caught on the flats, the flesh roughly scraped. It was more of a poi-like paste than the slashed cubes of poke that mainlanders eat today, and funkier; in his memory, his great-grandfather always washed it down with Miller Lite.

In the 1970s, local preference shifted to the larger fish of the deeps, above all ahi (yellowfin tuna), typically anointed with shoyu (Japanese soy sauce) instead of sea salt. This was in part because of changing demographics: Japanese immigrants, with their own custom of eating raw fish, started coming to Hawaii in 1868 to work the sugar plantations. As of the 2010 census, 57 percent of the state's residents were of Asian descent, the largest groups being Filipino, Japanese and Chinese; the poke that locals eat is as much of a mix as they are.

Twenty-three years ago, Judy Sakuma, a native of Vietnam who fled Saigon during the war, and her husband, Willy, began selling shoyu ahi poke from a cooler under a parking garage off Kapahulu Avenue, not far from Waikiki Beach. Now she and her daughter, Kim Brug, offer eight kinds of poke at Ono Seafood, a small, eternally besieged storefront with a couple of picnic tables, next to that same garage.

Her shoyu ahi is a marriage of Hawaii and Japan, given a sheen of sesame oil and a "secret shoyu" made with premium soy sauce and ingredients known only to her and Brug, and seasoned with skinny, snaking strands of limu, inamona and a faint but menacing tattoo of chili. Better yet is the spicy ahi, veiled in mayonnaise with a streak of heat. Half the kick comes from ginger, and the pop from tiny beads of masago (capelin roe).

Fresh ahi is delivered daily and turned into heaps of translucent ruby cubes. (Tako, or octopus, poke is also available.) Order a "bowl," and you receive a foam box of rice and poke, no more, no less. The rice itself is impeccably fluffy and exhaling warmth, just enough to leave the fish in a cool blush. Toppings are do-it-yourself from a case by the counter, stocked with seaweed salad, pickled onions, Korean taegu (spicy-sweet dried cuttlefish), tsukemono (Japanese pickles) and boiled peanuts. But you don't need them.

Fish flags — which fishermen fly over their boats when sailing back to harbor after the day's catch — hang from the second-floor railing of a strip mall in Moiliili. Up the stairs is Ahi Assassins, run by Joshua Schade, a third-generation fisherman from Kahaluu on Oahu's windward side, and his longtime girlfriend, Erika Luna. On their front door a bumper sticker declares: "Keep the country country!"

For Schade, poke is inextricable from his life as a fisherman and all its risks. Two summers ago, his boat sank. It was the Fourth of July; no one saw the flares. He swam 2 miles home in the dark, and brought the Coast Guard back to rescue his father and two uncles.

From the moment the fish leaves the boat to the moment it's served, at most two days pass. Its flesh is a barely muted incarnadine, sliced in larger hunks than typically found elsewhere, and beautifully tender.

Any of a dozen types of poke may be on hand, including shoyu garlic with crisp, clarifying arcs of white onion; pake, Hawaiian for Chinese, contoured with ginger and scallions; and "lunatic," named after Luna ("If you had to live with her, you'd know," Schade said) and essentially spicy ahi, only with sriracha untempered by mayonnaise.

Ahi Assassins was supposed to be just a fish store. (There are no tables.) But after the owners invited the neighborhood to an opening-day blessing in the parking lot, with food and poke for everyone, people came by looking for more. "It's not just the food," Schade said. "It's that feeling like you walked into my house."

Junichiro and Ryojiro Tsuchiya, brothers from Kawasaki, Japan, started Maguro Brothers in 2014 as a stand along the back wall of the Kekaulike Market in Chinatown, with a few tables for diners. (They've since added a takeout window in Waikiki.) Junichiro spent a decade working at Tokyo's famed Tsukiji fish market, and the seafood here, fresh from the nearby Honolulu Fish Auction — the largest in the United States and the only one to sell fresh tuna — is pristine and exactingly cut. Slabs of ahi sit in a glass case, with thin white rings like a tree trunk's and a deep, thrilling red at the center.

The recipes lean Japanese, with flavors like ume-shiso, tangy and bright from salted plum, and a tumble of hamachi (yellowtail) stung by wasabi. The brothers' take on spicy ahi is creamier, with more sweetness to the mayonnaise and a milder, if persistent heat. But they, too, honor Hawaiian tradition in a version strewn with little pronged fronds of limu. It tastes brinier than others around town, and closer to the sea.

Some of Honolulu's longest-standing poke destinations are grocery stores, like Tamashiro Market, run by three brothers, Cyrus, Guy and Sean Tamashiro. Their grandparents opened the original store in 1941, in Hilo, on the Big Island; after it was destroyed by the 1946 tsunami, they moved to Oahu and set up shop in Kalihi.

They were prescient: The address is just a mile from what is today the Honolulu Fish Auction, where the Tamashiro brothers buy seafood before dawn six days a week. They make poke from almost everything they get their hands on: surf clams, kajiki (blue marlin), nairagi (striped marlin) and kawa kawa (mackerel tuna), whose flesh is the lushest red.

Strong flavors are ascendant here, with nuances that only a kamaaina might understand, like ahi with white onions (clean and sweet) versus ahi with scallions (mellower). Their tako poke, made with octopus caught in local waters, is lovely: The octopus is first lomi-ed, or massaged, with salt, then steamed into submission.

At Tamura's Fine Wine & Liquors in Kaimuki — one of six locations across the islands — the poke counter is tucked at the back but fills the whole wall. As at Tamashiro's, the variety of poke is giddying, including dried aku (skipjack tuna), concentrated and blood-rich; smoked marlin; clams, oysters and mussels; nearly a dozen variations with ahi; and even pipikaula (Hawaiian beef jerky). Some of the seafood has been frozen, as noted on signs, but most is fresh from the auction.

Recipes are straightforward, with minute shadings. Here is ahi with inamona and sea salt; there, ahi with limu and sea salt. Shoyu is calibrated with little more than ginger. As for "Tamura's secret sauce," the manager I spoke with laughed and said, "I can't tell you."

The Foodland near my mom's house, one of more than two dozen statewide, has a sign over the poke counter that says "Hawaii's home for poke," and it is — the never-fail poke you run to the store for when friends announce they're stopping by.

The shoyu ahi is strong and just salty enough (ask for the shoyu to be packed in a separate container, to add at home); the spicy ahi has a worthy heat. The recipes for all outlets are overseen by Keoni Chang, a graduate of the Kamehameha Schools and the Culinary Institute of America in Hyde Park, New York.

There's nothing ceremonial about his approach. He uses ingredients like sea asparagus, truffle oil and gochujang, and makes a deconstructed California-roll poke with avocado, furikake and sriracha, one of the stores' best-sellers. And he's not against the mainland poke craze, "so long as you take time to understand the history and apply common sense and restraint."

"If it's amazingly delicious —" he said, and trailed off. "It's a free country."