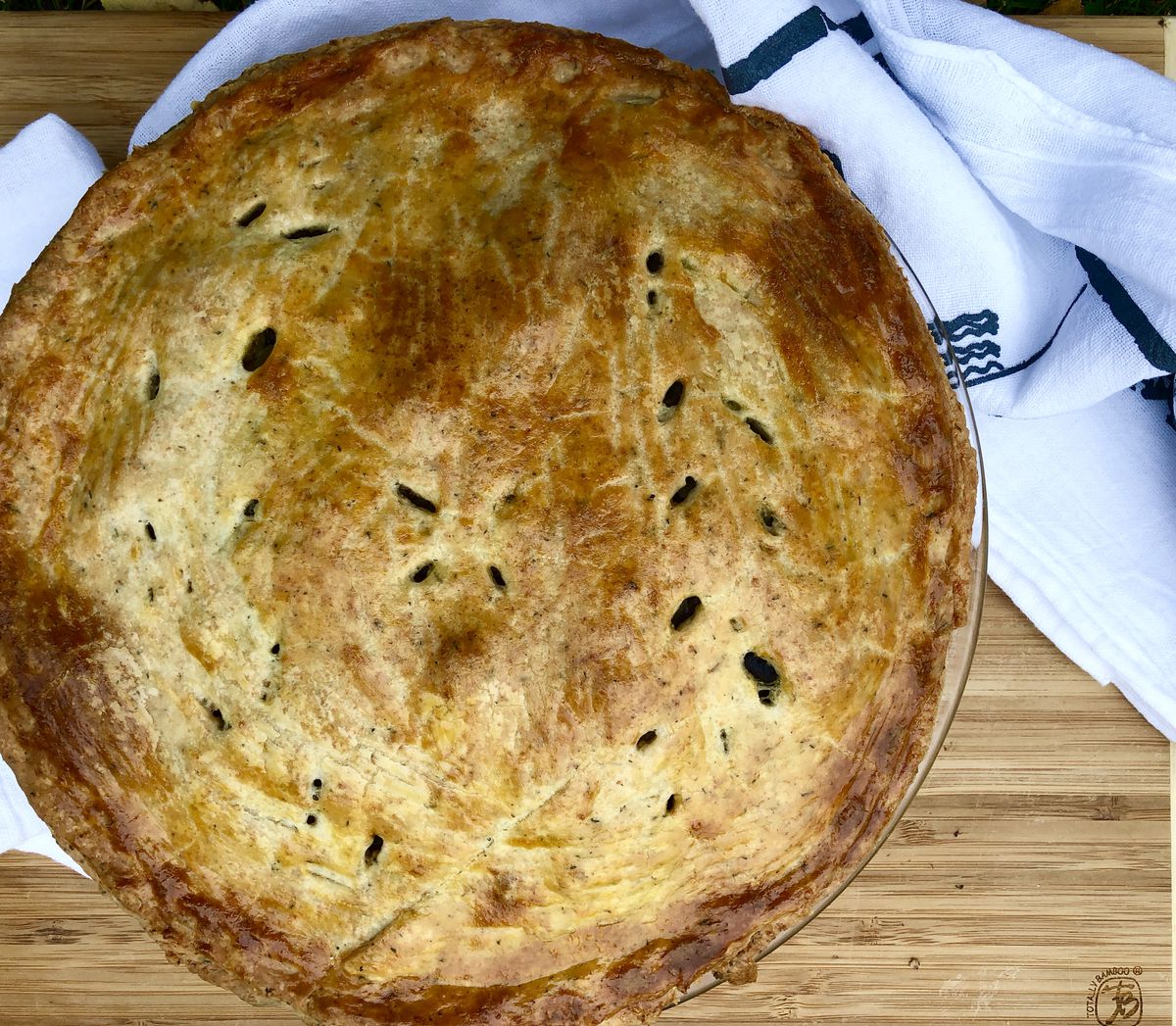 Looking through Alaska's old cookbooks, especially those from Southeast Alaska, Homer, Kodiak and the Aleutians, I've found many recipes for a Russian-influenced salmon pie, often called peroke or pirok. Researching it further, I think it's one of a handful of dishes that has taken on a life of its own in Alaska, becoming more regional over time.

Many recipes use puff pastry and many include a sliced boiled egg. Most can accommodate canned or raw salmon. Smoked salmon works too. All of them rely on vegetables that grow well in Alaska, including cabbage, onions, celery, carrots and potatoes. I was able to find all my ingredients at the farmers market.

My version of salmon pie, which uses a Parmesan crust, isn't all that traditional, it's more pirok-inspired than actual pirok. That said, it's easy to modify. You can use store-bought crust or puff pastry if you're in a hurry. Add a layer of Yukon gold potatoes sliced on a mandoline if you like. Or a layer of thin-sliced carrots. Some people don't feel right if there are no green peas. You can also use brown or wild rice. I decided my family wouldn't really be into the boiled egg so I skipped it, but you could layer one on there.

I will say that this dish is kind of a showstopper and a great way to stretch salmon to feed a crowd. (Also a good use for spoon meat, canned salmon or spring freezer salmon.) Oh, and the secret to great flavor: bacon fat. That comes straight from a 100-year-old cookbook. If you don't have any on hand, try a couple slices of bacon.

At least three hours before you plan to eat, in the bowl of a food processor, grind the Parmesan until it's fine. Add butter, flour and thyme, pulse into a fine meal. Drizzle water to the mixture with the blade spinning until it forms a ball. (I don't recommend making this crust by hand.) Divide in two, wrap in Saran, put in the fridge for at least an hour. (If you're in a pinch, the freezer for 20 minutes works, too.)

About an hour and a half before dinner, preheat oven to 350 degrees. Over medium heat, melt bacon fat and sauté cabbage, onion, leek, celery, mushrooms about 10 minutes, until soft. Salt and pepper generously. Meanwhile, in a small saucepan over medium heat, melt butter and whisk in flour to form a paste. Pour in the stock, whisk to combine. Allow to boil and thicken, remove from heat. Roll out the dough and line a 9-inch pie pan. Layer rice, salmon, vegetables. Pour the stock mixture over it and then drizzle the cream over the top. Cover with second crust and cut some small vents. Brush with a beaten egg. Bake 40 minutes. Cool for at least 10 minutes before serving.