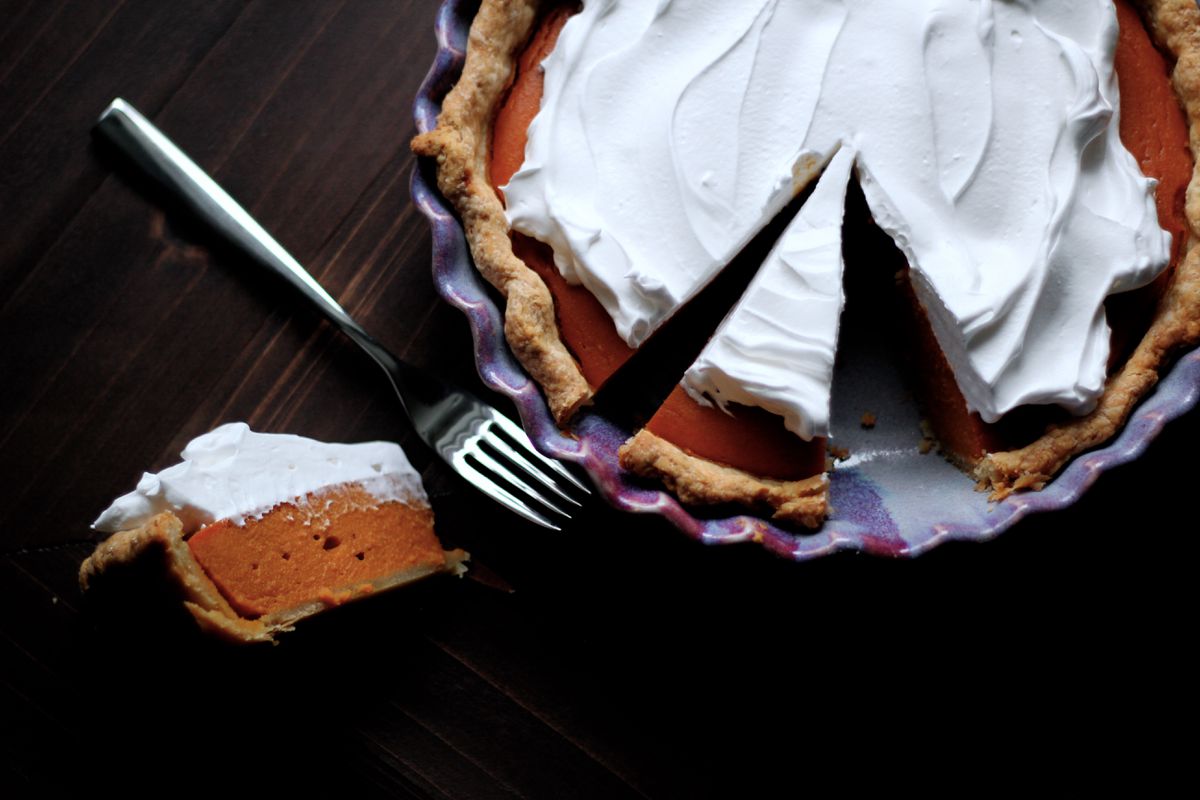 To lovers of candied yams with marshmallow topping, I'm not going to hate on you. That dish, a retro classic that has graced many a Thanksgiving table throughout the decades, has gotten a bad rap over the years. I know what a powerful thing food nostalgia can be. I've made a pie in your honor, a show-stopping sweet potato pie with marshmallow meringue.

Two of my kids thought this was pumpkin pie, and my daughter declared it to be the best she'd ever tasted. This sweet potato pie does easily pass as pumpkin pie, but in my opinion, has better texture. It's more velvety and smooth. It's great on its own, but this marshmallow meringue takes it over the top. If you happen to have a kitchen torch on hand and like your marshmallows a little charred, feel free to brown the marshmallow topping just before serving. I just wouldn't recommend putting it under the broiler because the pie crust would burn on the edges. Both the pie and and topping can be made in advance and refrigerated.

Method:
Preheat oven to 400 degrees. Line a baking sheet with aluminum foil. Prick the sweet potato with a fork. Roast it on the baking sheet until tender in the center, 45-60 minutes. Allow to cool 30 minutes.

Place the pie dough into a standard pie plate. Trim and crimp the edges. Set aside.

Preheat oven to 350 degrees. Peel the sweet potato. Add the flesh of the sweet potato to a blender or large food processor. Pour in the melted butter and milk. Whirl to break down the sweet potato. Add the eggs, sugars, nutmeg, cinnamon, salt, vanilla, and maple extract and bourbon (if using). Whirl on medium speed until completely smooth and combined, scraping the sides of the blender as needed. Pour the custard into the pie crust. Bake for 55 minutes or until completely set in the center and crust is golden brown. Place pie on a cooling rack to cool.

Add the egg whites to the bowl of a stand-mixer fitted with the whisk attachment. Whip the whites on high until they turn white and frothy and hold a soft peak. Let stand while you do the next step.

In a small saucepan over medium-high heat, whisk together the sugar, water, and cream of tartar. Bring to a rolling boil and cook until the syrup reaches 245 degrees on a candy thermometer.

With the mixer on low, gradually stream the hot syrup mixture into the egg whites. Turn the mixer up to high speed and whip until a thick marshmallow consistency is reached, about 3 minutes. Add the vanilla and whip to combine. Using an off-set spatula, spread the marshmallow meringue on top of the cooled pie. Slice and serve.