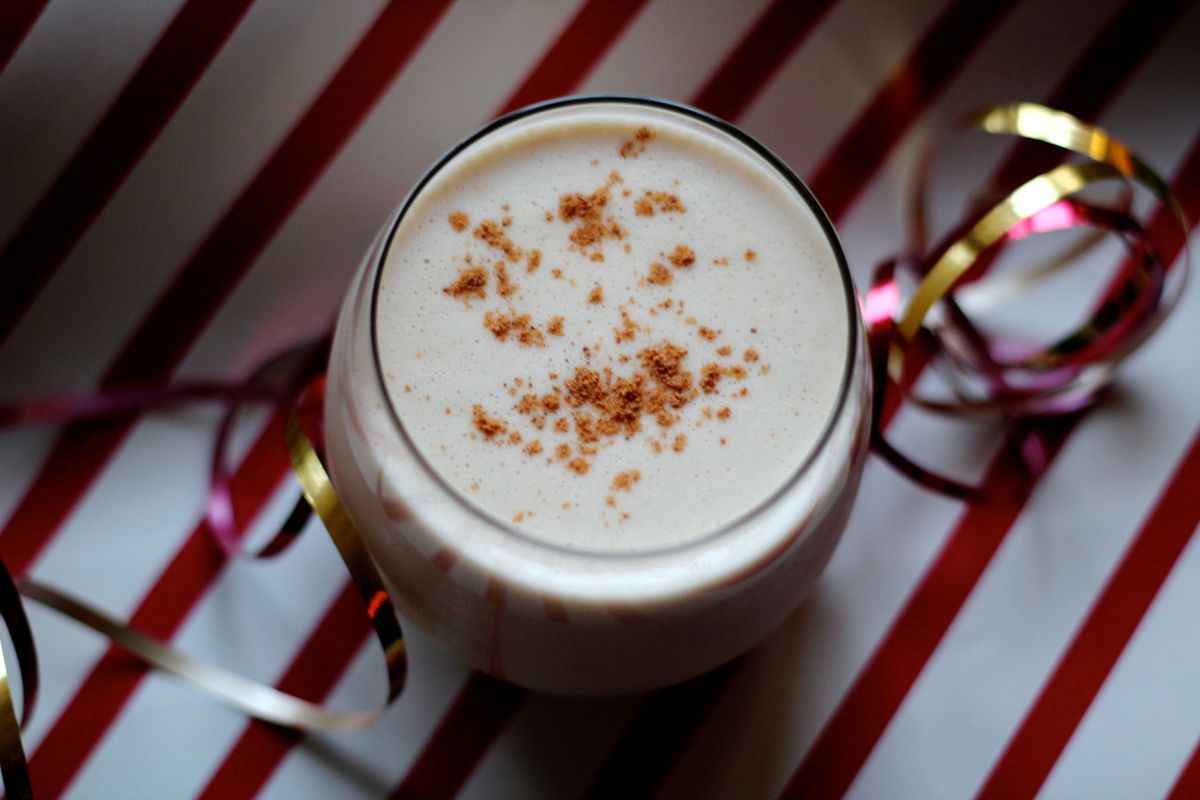 When made with a two-to-one ratio of two parts dairy to one part liquor, this boozy eggnog can last for several weeks in the refrigerator, and the flavor and texture only improve with time. (Maya Wilson / Alaska From Scratch)

When made with a two-to-one ratio of two parts dairy to one part liquor, this boozy eggnog can last for several weeks in the refrigerator, and the flavor and texture only improve with time. (Maya Wilson / Alaska From Scratch)

Fair warning: This eggnog recipe contains raw eggs. It also contains lots of booze, which acts as a sterilizer and a preservative for the eggs and cream. Sara Christensen at The Kitchn writes, “Very few bacteria, including salmonella, can survive in the presence of alcohol, as has been proven in lab experiments at Rockefeller University.”

When made with a two-to-one ratio of two parts dairy to one part liquor, the eggnog can last for several weeks in the refrigerator, and the flavor and texture only improve with time. This process is called aging. It is said that this practice started centuries ago, as a means to preserve eggs and cream into the winter months, before refrigeration, making it a popular winter drink.

According to Ethan Trex’s piece"Eggnog: Everything You Need to Know," this recipe is very similar to one George Washington served to guests in the 1700s — a mixture of cream, milk, eggs (separated into yolks and whites), sugar, rye whiskey, rum and sherry, stored in a cool place. Later, when Americans began making bourbon, it often replaced the rye whiskey in the American versions of eggnog.

I recommend using the freshest eggs you can find, organic preferred. Traditionally, the beaten egg whites are folded in just before serving, giving it that classic froth. I prefer my nog on the less frothy side, but my wife loves it extra frothy.

You can customize this to your liking. Because the eggnog thickens the longer you keep it stored in your refrigerator (and it’s quite boozy), you can always dilute it by adding more milk just before serving. Or, I’ve found a splash of club soda to be surprisingly delightful, the bubbles cutting straight through the richness, making it more like an eggnog punch. You can also choose which liquors to use according to your taste or what you have on hand. I used equal parts bourbon, rum, and cognac, but feel free to play around with different ratios.

Don’t forget the fresh nutmeg on top. That’s my favorite part. If you prefer your eggnog without raw eggs or sans booze, there are many cooked eggnog options out there to choose from.

Nutmeg for sprinkling on top

In a mixing bowl, briskly whisk together the 6 egg yolks and the sugar until light yellow and airy, about 90 seconds. Pour in the bourbon, rum and cognac. Gently whisk the liquors into the egg yolk mixture until well combined, helping the sugar dissolve as your whisk. Stir in the milk and cream until smooth. Transfer the eggnog to a covered pitcher and refrigerate at least 1 hour (or overnight). Cover and refrigerate the egg whites.

When ready to serve, whip the egg whites until a soft peak forms. Begin by folding 1/4 of the egg whites into the chilled eggnog. If you like your eggnog more frothy, fold in more egg whites gradually until desired frothiness is achieved. Pour the eggnog into short glasses. Sprinkle with nutmeg. Serve. Leftover eggnog can be kept, sealed in a mason jar, in the refrigerator for up to 3 weeks. (Recipe adapted from The Kitchn.)

*If you like a thicker eggnog to begin with (before aging), use heavy cream here instead of half and half, but bear in mind that it will get even thicker over time.

NOTE: This recipe contains raw eggs. Use very fresh, organic eggs if at all possible. Be aware that consuming raw or undercooked eggs can increase your risk for certain food-borne illnesses, especially if you have a medical condition.