You want to get on the sourdough bread train? Get ready for a long, rewarding trip. 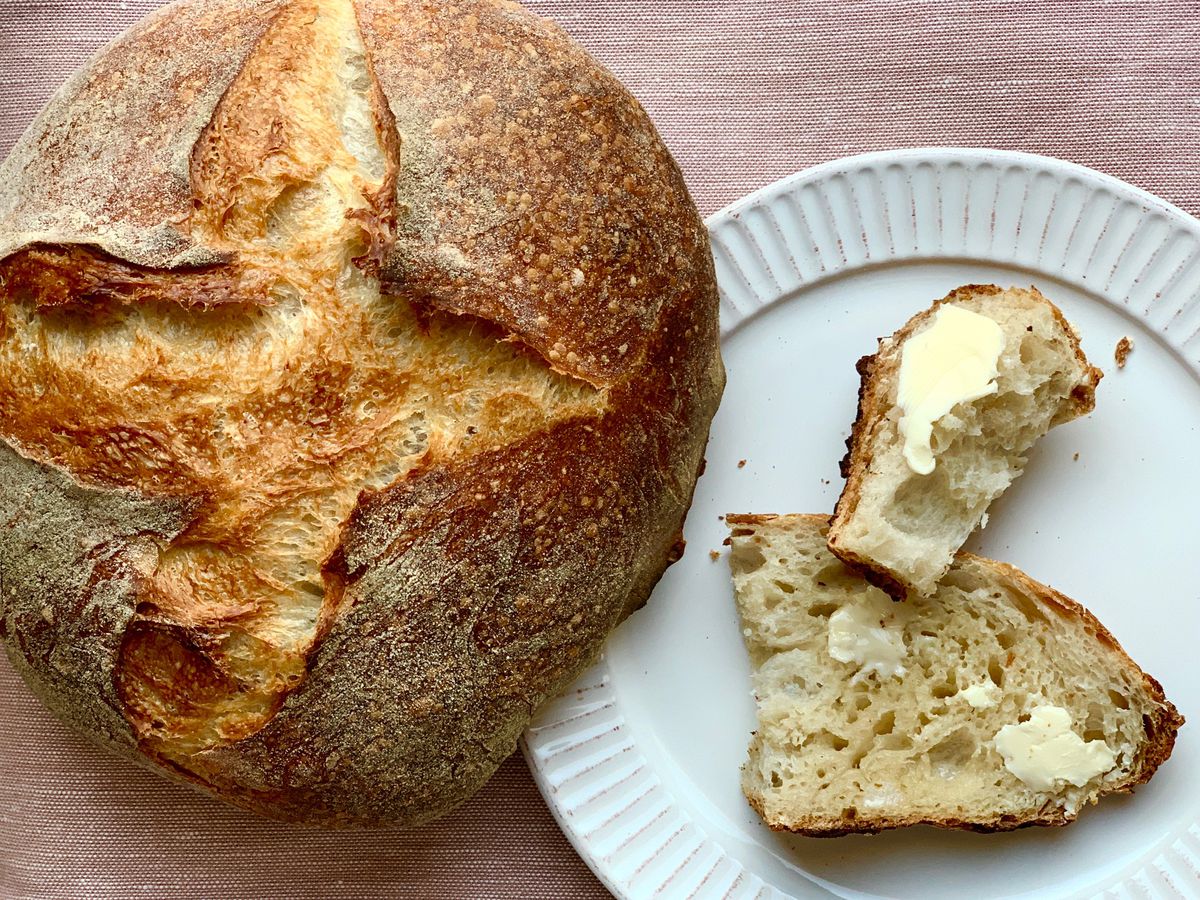 Like so many Alaskans, the minute I suspected we were all headed for the bunker last month, I started feeding my sourdough starter. I’m a pancake person, but I texted my friend Beau Schooler, a chef and baker down in Juneau, about how to raise a loaf.

Schooler is a meticulous sourdough genius at In Bocca Al Lupo, a restaurant in a bakery building that’s been raising loaves with natural yeasts for a century. He sent me an opus of a recipe for an impressive chocolate-cherry loaf that got psychedelic about the universe and bread science. By then, though, my usual life had ceased to exist.

I found myself on the couch editing a stream of breaking news stories that got darker each hour. My children fought and did flips and performed songs and begged me to pay attention. My youngest said he dreamed I was slamming a door in his face. My oldest quit going outside. The news rolled on. The price of oil sinking. The economy crumbling. New York City swallowed by illness. Friends losing jobs. Friends losing family members.

I started to have episodes of shortness of breath, but realized it was just panic. I texted Schooler that I couldn’t do it. The starter was dead on the counter. I couldn’t think.

Down in Juneau, Schooler’s phone pinged with my text while he was making take-out frozen pizzas in his empty restaurant, trying to reason how his business could pull through the summer with no cruise ship tourists. Feed my starter and wait, he texted back. I stirred in some flour and water. The next morning, it bubbled back to life. I texted him that I couldn’t figure out why the sight of it made my eyes fill with tears.

Then I began to work my way through a simplified version of his recipe. I mixed, kneaded, waited, folded. The most important thing is to have a reliably warm place to rise the dough, preferably in the neighborhood of 80 degrees. I set mine on the boiler. Watching those first loaves rise felt like witnessing a miracle. They baked into sour, crisp-crusted masterpieces. The children ate warm bread with butter. In an inside-out world, so much comfort comes from witnessing a natural process that works out the way you expect, you know?

I’ve made 16 loaves now, and have messed up every step. I forgot salt and added it late. I didn’t let it rest. I let it rise too long. Even so, the loaves came out. I walked them over to my parents’ and set them on their porches. The key to all of it, I found, like with so many things that feel impossible, is to take it one step at a time and to do your best.

3/4 cup sourdough starter, charged and at its peak

To charge up your starter:

Mix 2 tablespoons of active starter with ½ cup flour and ½ cup water, cover it with a damp cloth, and let it sit at room temp, away from drafts, for 10-12 hours or overnight. (I put mine in the oven with the light on.) When it’s ready, you should be able to take a chunk of it, drop it in water and it should float. If it doesn’t, feed it again, it’ll get there.

To make the bread:

When the starter is bubbly and ready, pour the water (except for the two tablespoons) into a bowl large enough to fit everything. Then add the flours. Combine by hand, kneading it into a shaggy mass. Allow it to rest for 30 minutes. Add the starter to the dough, knead it in by hand. The dough will be sticky. Cover with plastic wrap and allow to rest for 30 minutes in a warm place.

Next you’re going to give the dough its first fold in a series of four folds, done every half hour. The first time you do this, stir the salt with the two tablespoons of water and fold it in. Then shape the dough into a ball and move it to a lightly greased bowl. It’ll stay in that bowl till you bake it.

On the folding technique, Schooler says: “You can do the folding in the bowl, no need to take the dough out. Imagine it as a square. You’re gonna take the side of the square closest to you, grab it from the edge and lift up, stretching it until it seems like it won’t stretch anymore without tearing, then press it into the middle. Repeat with the three remaining sides, then flip the whole thing over in the bowl, so the bottom is now the top.”

Repeat the folding process three more times, each time a half hour apart. Always cover it and let it rise in a warm place. Then let the dough rise, covered, in the warm spot, at least two hours, or so that it’s at least 25% larger. Depending on what else you’re doing, you can go as long as 5 hours.

When the dough has risen, gently dump it out onto a lightly floured counter and cut it into two equal portions. Take each one and gently fold it into a ball, then place them seam-side down on the counter. Cover with a towel and let them sit there to relax for like half an hour, “until they start to slack out and flatten like pancakes,” Schooler says.

In the meantime, lay two dish towels inside clean bowls and generously flour them. (Schooler rubs the flour into the towels on the counter before he puts them in the bowls.)

Next, take one of the dough balls and gently pick it up, placing it down in front of you on the lightly floured counter, smooth side down. Imagine it as a square with 4 corners, Schooler says.

You should end up with a taut ball. Place the ball, seam-side up, into the rising bowl with the dish towel. Repeat with the second dough ball. Cover loosely with a plastic shopping bag, then let it rest on the counter for about 15 to 20 minutes before moving to the refrigerator overnight.

In the morning, place a lidded dutch oven, or two if you have them, into your oven and heat it to 475 degrees.

Once the oven is preheated, take out your dough or doughs, depending on how many Dutch ovens you have heating. You will flip the dough, seam side down into the hot dutch oven. (Careful!) Quickly, take a razor, a box cutter or sharp knife, and cut a X across the top of each dough ball, about a 1/4” deep, and all along the top.

“Grip it and rip it, don’t be scared or the knife will catch and tear your dough, maybe even deflate it,” Schooler says.

Put the lid back on the dutch oven (or ovens) and place in the oven. After 20 minutes, take the lid off the pot. Let the dough bake 20 minutes more, uncovered. Let it get dark, almost burned.

“Don’t be a poser about it,” Schooler says. “Trust the process.” (I am a poser and take mine out after 16 minutes.)

Take the pot out of the oven and dump the bread onto a wire rack to cool.

Schooler says: “They say you shouldn’t cut into hot bread, but they’re liars and are just telling you that because they’re insecure. Do whatever you want, it’s your bread.”