After blowing up on TikTok, hot chocolate bombs are sparking a cottage industry in Alaska 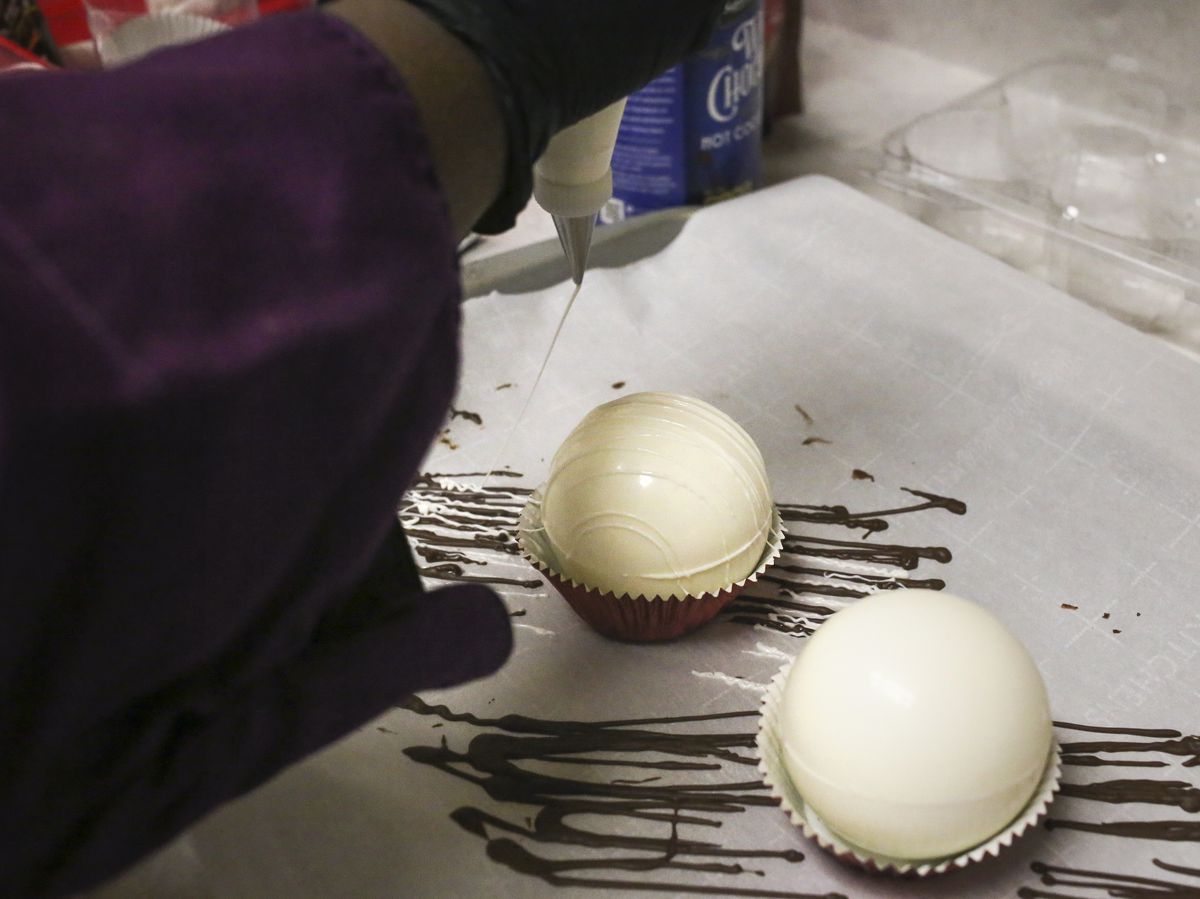 Kat Clapper of Miss Kats Sweets in Wasilla has been busy making hot chocolate bombs ever since a friend recommended her product on a local Facebook page.

With more than 193 million hashtags on TikTok, #hotchocolatebombs have made their way to Alaska, and local bakers and businesses are creating their own. The “bombs” are hollow chocolate spheres that melt away when warm milk is poured on top, revealing powdered chocolate, marshmallows and other treats inside.

“I actually came across the cocoa bombs on TikTok and thought it was super cool,” Clapper said. “I found the molds at Michael’s and thought, ‘I’ll try it and see how it goes.’ I always loved baking, and I decided to start my own business — the cocoa bombs really helped get it out there.”

Clapper has eight flavors, including butterscotch, hazelnut and cinnamon roll. She takes orders through her Miss Kats Sweets Facebook page.

Clapper isn’t the only one finding success with hot chocolate bombs. LaTasha McKnight of Mac’s Snacks and Treats in Anchorage — which was part of Alaska Community Land Trust’s “Set Up Shop” program — started selling them last Christmas. The treats gained more popularity around Valentine’s Day but exploded this holiday season.

“It wasn’t as big as it is this year,” McKnight said, whose products are posted on Mac’s Snacks and Treats Facebook page.

“The ones that are homemade are actually a little bit bigger than the ones that the franchise stores sell,” McKnight said. “And, the home baker or bakeries that do them … they actually have more freedom with the flavors. You don’t have to just get milk chocolate or dark chocolate.”

Christy Dawn Zeiler of Anchorage says she tried her own spin on chocolate bombs in 2019 for friends and family.

“Last year, I made some for my nieces and nephews, but I didn’t make them in the bombs,” Zeiler said. “I made a ginormous snowman … I ordered the snowman molds, and it’s kind of like the bombs, they are hollow. … The kids were in awe about it. I saw the bombs, and I said, ‘I’m doing that next year, that’ll be so much easier.’”

Zeiler, a tattoo artist at The Hole Look in Anchorage, says the pandemic has caused her to be in and out of work. She was looking for something to help pay the bills.

“I put on Facebook to my friends, ‘Would anybody be interested if I did this?’ It was a big if — and it was such a huge thing,” Zeiler said.

Since then, Zeiler has made hundreds of bombs, which are about the size of a baseball. She sells a four-pack for $20 — either hot chocolate or coffee-filled — with flavors like hazelnut, raspberry and non-alcoholic Irish cream. She hopes to sell heart-shaped bombs for Valentine’s Day in 2021.

Smash the Pastriarchy — which sells custom cupcakes, doughnuts and cakes and delivers in Anchorage and Eagle River — is also selling hot chocolate bombs with flavors like salted caramel, gingerbread, peanut butter and strawberry. They have their own coffee bombs, too: Latte flavors include peppermint mocha and pumpkin spice. Each bomb is $5, four for $20 or six for $30. (smashthepastriarchy.com)

Outside of Anchorage, The Grind Coffee in Juneau is selling Christmas-themed bombs for $12 for two or $40 for eight. Lulu’s Bread & Bagels in Fairbanks has hot chocolate bombs in limited supply.

The U.S. Centers for Disease Control and Prevention says the risk of getting sick with COVID-19 from eating or handling food and food packages is considered very low.