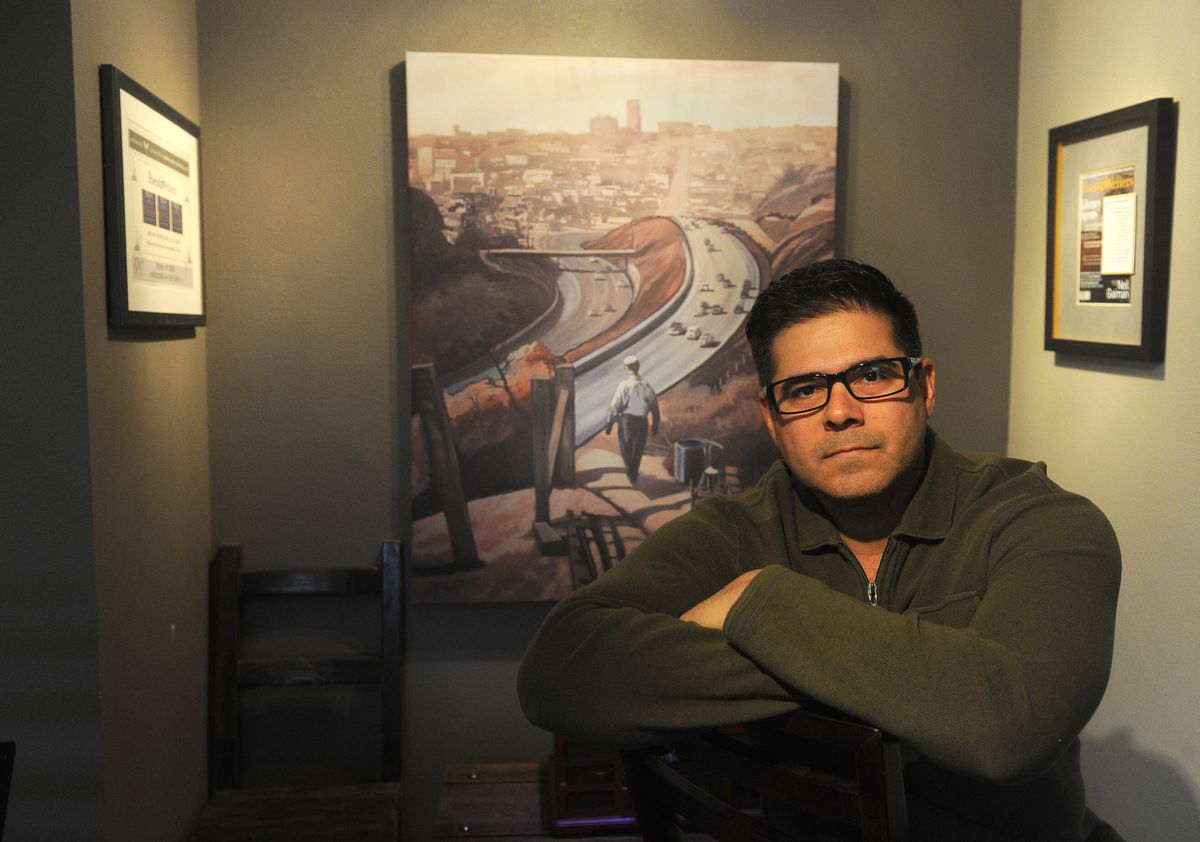 Anchorage firefighter, paramedic and author Bryan Fierro has just published the novel “Dodger Blue will Fill Your Soul.” The print behind him shows Chavez Ravine in Los Angeles, the setting for part of his book. Photographed at his Anchorage home on Friday, Oct. 20. (Bob Hallinen / Alaska Dispatch News)

Anchorage firefighter, paramedic and author Bryan Fierro has just published the novel “Dodger Blue will Fill Your Soul.” The print behind him shows Chavez Ravine in Los Angeles, the setting for part of his book. Photographed at his Anchorage home on Friday, Oct. 20. (Bob Hallinen / Alaska Dispatch News)

Dodger Blue Will Fill Your Soul

As Alaska becomes more culturally diverse, so does our art and literature. Bryan Allen Fierro, an Anchorage firefighter and paramedic, joins the ranks of Alaska's finest literary writers with the publication of his first book of fiction, a short story collection set in the Latino communities of east Los Angeles, where he grew up.

"Heart" may be the key word for all 11 stories. In each one, individuals reach for connections to others, and the caring they express — however awkwardly in some cases — brings their lives into sharp and empathetic focus.

A reader has the sense that Fierro knows his characters intimately, and that he loves each one. He brings each onstage — whatever their circumstances — with affection and humor.

As a character says in "Homegirl Wedding," "I date a girl who has been in a knife fight, and no matter how many times I say it, it still sounds otherworldly to me." From his backyard, this same character observes, "From here I can see how beautiful she looks. She is framed in the window just off center, like a portrait I might hang right there on the side of the house, if I were a man who'd do such a thing. The lawn, however, has seen better days, now peppered with patches of yellowed dead grass that gives it the polka-dot effect of a hundred rocket launches."

While the physical settings throughout the collection are vivid and presumably representative of southern California locations, the time elements are less defined. There are no cellphones or recent pop culture references here.

Rather, the stories generally take place in earlier decades, conveying a historical quality. The title story, for example, has Dusty Baker and Steve Garvey playing for the Los Angeles Dodgers, which would place it about 1980. The Challenger explosion that situates another story happened in 1986. (Fierro was born in 1980, and readers can probably conclude that he grew up in a family of storytellers, a heritage he's embraced.)

In the title story, "Dodger Blue Will Fill Your Soul," a rabid Dodgers fan looks askance at his 9-year-old son who "criminally does not watch Dodger ball." But there's a lot more going on in that household during a particular game, involving a flirtatious wife, "Mexican" cousins with tattoos, a broken-down TV, years of nostalgia and questions of identity.

"Isaac looks at you with contempt of your love for the Dodgers. This is Dodger Blue. And despite all you think, you are Mexican! You can't help but grab the world and Dodger baseball with your whole heart." This story — so full of rich visual details and characterizations — transports readers into both the inner and outer life of the dad and ends with what might be called a perfect pitch.

Several other stories — among the most memorable — feature boys trying to figure out how to be men in a culture that is historically, or perhaps stereotypically, "macho."

In the opening story, "Beto Ordonez," a hyperactive 11-year-old with a crush on his nun teacher, reacts to the explosion of the space shuttle Challenger. As with the other stories, references to the deeper lives of the characters, including the boy's home life and absent mother, allow readers to see into fully dimensional lives.

In "Fortress of Solitude," a second-grader believes the actor visiting his classroom as Superman is the real thing. When the man gives the boy a ride home in his '57 Chevy, we get to see the neighborhood, its citizens and a glimpse of the future as we, too, might if we thought that a superhero was our friend.

A number of the stories include semi-magical or religiously inspired moments that ask readers to take a leap or two into the beliefs or strange realities of characters.

Occasionally it takes a few pages to figure out — in an intriguing, not confusing, way — just what is happening.

In "Minefield," for instance, two boys under their grandmother's direction prepare and then bury the grandmother's weather-worn St. Jude statue in her yard. Throughout, the boy narrator obsesses about his Uncle Joe, who lost a leg in Vietnam and then disappeared from his family. In reading this story, it helps to know that St. Jude is the saint of hope and impossible causes.

In one of the longer stories, "The Healing Caves of Marrano Beach," a woman with cancer and her husband visit a commercial operation in which radon is leaking through the floor and walls of caves. There's a surreal quality to the scene, with ill and damaged people and their ill and damaged pets soaking up the "healing" gas. When the caves close for the day — and the couple stays behind — more strangeness awaits them.

The author will read from and talk about his book on Thursday, Nov. 10, at 7 p.m., at an Anchorage location to be announced. The program is part of the 49 Writers Reading and Craft Talk Series. For updated information, see 49writers.org.