Kachemak Bay has seen massive die-offs of sea stars and other species. What’s going on? 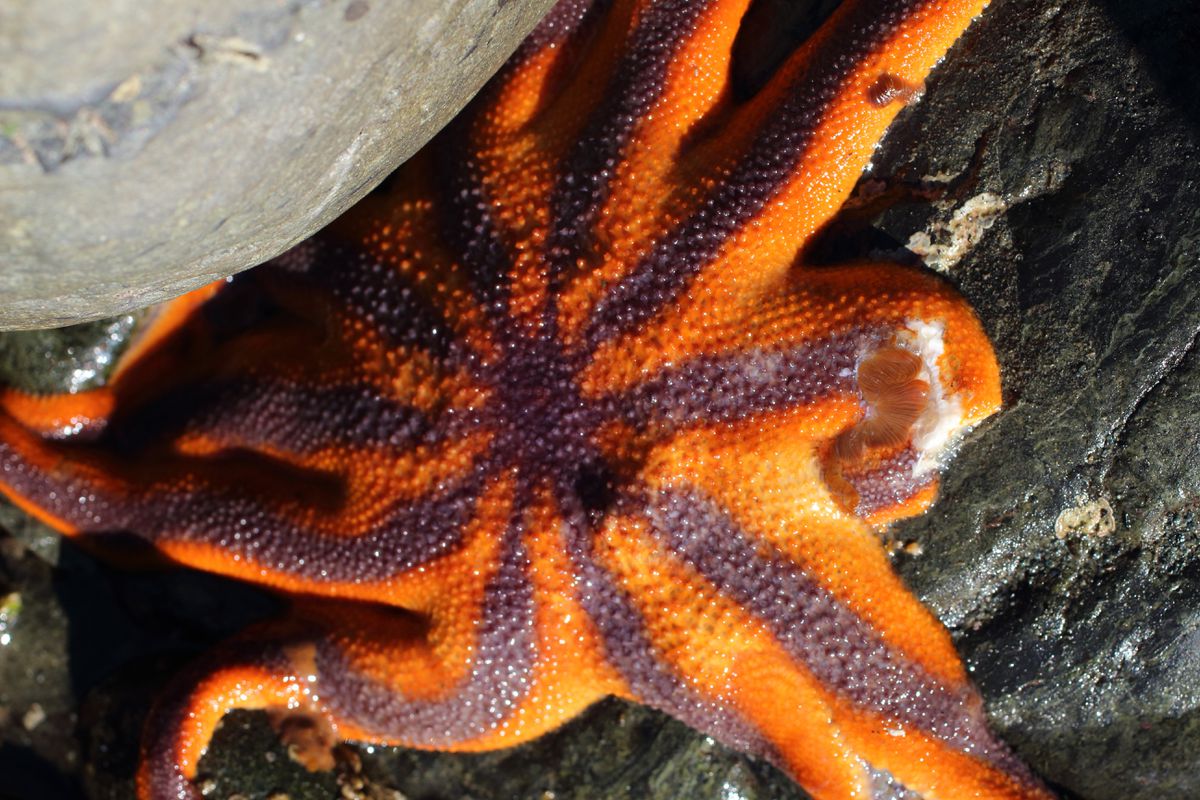 JAKOLOF BAY — I came to the beach to count sea star corpses. You might know them as starfish — stiff, five-pointed bodies like a child's drawing of a star, crayon-bright. About 10 species once were common in the intertidal zone here, with different colors and shapes and numbers of rays — hundreds of which had been dismembered and scattered over the beach, as if a monster had stalked through before us, tearing their bodies apart.

The monster is sea star wasting disease. Broken patches on the skin turn into fissures, with brown globs of sea star insides leaking through the cracks. Within days, the stars turn limp, fall off rocks, shed arms and melt away into soft, wet puddles.

The tide sweeps over them, scattering their last remains. We're left with an absence, another mystery, and an ocean that seems to be shifting too quickly for anyone to keep up.

A few months earlier, my kids and I kicked the eagle-scavenged carcasses of murres off one of our favorite camping spots before heading down to low tide among a mass of then-alive sea stars. The birds were leftovers of last winter's die-off, when tens of thousands of murres starved to death and washed up along beaches all over Southcentral and Southwest Alaska. Biologists counted more dead seabirds than they ever had before, but there were more than anyone could count, leading to the second consecutive summer of empty nesting colonies, a silencing of the usual raucous chatter of sex and birth.

It was also the second summer in a row with no clams or clammers on Ninilchik beaches, and no young clams to promise a recovery. Otters washed up dead on the shores of Kachemak Bay. Dead whales rotted on the surface, and live whales lingered in our fjords late into last winter, months past their usual departure.

How weird is all this? And does it all fit together?

"That's the question we're all trying to answer," said Kris Holderied, oceanographer with the National Oceanic and Atmospheric Administration, or NOAA. While we talked, whitecaps swept down Cook Inlet, where she had hoped to be out on a boat, monitoring the ocean. Rain spattered against the roof, and punctuated the cellphone signal with brief gaps of static. It fell on the ocean, and flowed from the rivers, creating a layer of freshwater that floated and spread across the Gulf of Alaska.

"The last two winters, we never had the big cold-air outbreak, cooling the northern Gulf of Alaska. It rained all winter long, and that freshwater stabilized the water column. Not only are you not cooling it, but it stops nutrients from mixing, and changes what happens with the plankton."

Blooms of a plankton called Alexandrium, associated with warm water, burst into Kachemak Bay, giving us our first high levels of paralytic shellfish poisoning (PSP) toxin recorded in more than a decade.

Pseudo-nitzschia, another blooming plankton, left domoic acid, another neurotoxin, in its wake. Holderied's research focuses on the most basic parts of the ocean — the temperature, the nutrients and these smallest pieces of life. From there, currents swirl and plankton are swallowed by a complex food web of largely unseen creatures, until there's something dramatic enough for us to notice.

Katie Aspen Gavenus, a naturalist with the Center for Alaskan Coastal Studies, was one of the first to notice the dying sea stars.

Gavenus' job has her out in tidepools all summer, teaching schoolchildren and guests about the creatures. She could always make an impression with a sunflower star. Bright orange to deep purple, these stars are larger than the lid of a 5-gallon bucket, with up to two dozen creeping arms. They're voracious predators, simultaneously fuzzy, spiny and slimy to the touch, gliding over the kelp beds with startling speed.

"I picked up one that appeared to be completely healthy, and I was showing it to some guests — a family — supporting it with two hands," she said. "Then a ray fell off. Then another one. I knew what was happening, but I didn't know how to explain it to them — that it was dying in front of their eyes."

Soon there were no more sunflower stars to be found. Other species followed. Gavenus returned to the sea star plots naturalists had been surveying since 2014, recording melting sea stars, and then almost no sea stars at all.

Temperatures spiked this summer in Kachemak Bay at around 57 degrees, several degrees higher than the usual summer peak and warmer than any summer since 2005. In the middle of August, the Kachemak Bay Research Reserve warned of toxic mussels in the Homer harbor, just when the sea stars were beginning to succumb. Wasting had been present here at a low level for years. Perhaps higher temperatures finally caused it to break into a full-scale plague.

It's a simple story — but it's too simple. Farther south, the sea stars' pandemic began before the anomalously warm "Blob" of water appeared in the Gulf of Alaska, spreading across places with vastly different environmental conditions, linked to temperature in some places but not others.

The bodies of these dying stars teem with a virus called SSaDV (sea star-associated densovirus), but the healthy stars have it too, as do museum-preserved stars from as far back as 1942. None of the scientists I spoke to could explain what sparked the current plague, which broke out in the summer of 2013, leaping up and down the coast from Washington to California to Oregon, British Columbia and Alaska.

"It's probably a pathogen plus environmental factors," said Melissa Miner, a researcher with University of California, Santa Cruz who's been tracking the outbreak for years. "Some people are looking at ocean acidification as well."

In some places, the first people to notice sea star wasting were workers in aquariums, where stars in kiddie touch tanks melted away, infected by the filtered, pumped-in ocean. Water is a sea star's blood. It enters through a pore on the top of the animal, and moves through a series of canals, operating the thousands of tiny tube feet through a system of hydraulics.

The same water soon becomes the blood of its neighbor. As land creatures, we live in our protective bags of skin. But in the ocean, currents sweep up pathogens and toxins, plankton and larvae, connecting distant places and creatures.

The vast majority of die-offs are like the ones here — unstudied, uncounted or reported only in newspapers. Still, scientists tracking the largest mass mortality events have found that the ones they can count are becoming larger — killing more birds, fish and marine invertebrates. Fewer die-offs are caused by cold stress, while more are now caused by harmful algal blooms, by disease or by several simultaneous factors.

Sea stars are brainless, heartless and inedible. They might still be important. Decades ago, scientists removing ochre stars from the beach watched mussels grow over the rocks, and invented the concept of a "keystone species." The loss of sea stars may cascade through the entire intertidal ecosystem. Or juveniles may carpet the rocks, quickly growing to replace what was lost. Miner has seen evidence of both futures in her long-term monitoring sites — beaches with babies, beaches empty.

We don't know what will happen with the sea stars. We don't even know what is happening with the sea stars. The scientists I spoke to didn't know why the Kachemak Bay sea stars died this summer — they didn't even know it had happened. There are so few scientists in Alaska, scrabbling for funding, fighting the weather and dealing with a huge and complicated ocean. Plus, Alaska's 34,000 miles of tidal shoreline, according to NOAA, is nearly four times more than the No. 2 state of Florida.

"The system is just really variable," said Katrin Iken, a marine biologist at the University of Alaska Fairbanks. "It's hard to pick out a change that is different than that variability."

Some strands braid together neatly. Last winter, tens of thousands of murres starved to death. This summer, the remaining murres abandoned their nesting colonies and failed to raise chicks.

But what about sea star viruses?

Or a phytoplankton community with bigger numbers and smaller cells?

Or shifts in kelp beds?

All these braid together like my daughter's hair after a week in the wilderness — a confusion of snarled knots and flyaway strands and tucked in bits of spruce twig.

We're probably missing strands. Most of the ocean is invisible and unnoticed — built of species neither cute, iconic nor commercially harvested.

Kachemak Bay is better monitored than most. Mandy Lindberg, a biologist with NOAA, hopes that remote-sensing networks can be deployed across the state to catch some of what we're missing: "We need instruments that send data and imagery. It's more important now because of all these weirdnesses with the climate."

"Mother Nature is giving us this huge natural experiment," Holderied said. "The conditions we've been seeing, we've never seen them before. They're three or four standard deviations above the normal — but by 2046, this will be normal."

This summer, I walked the beaches with a little yellow notebook in my pocket. It's full now, scribbled with geeky little lists of each species I found at low tide — sometimes 70 in a single morning. They were records of new things I learned. Perhaps they're also records of things that will never be the same. I used those lists when I uploaded my observations to the citizen-science site tracking sea star wasting. My pin marks showed up on the map. They made me feel important. It was unnerving, exciting and sad all at the same time.

In October, my son and I walked down the beaches of Jakolof Bay, hands tucked into our pockets to protect against the frost. The crabs hunched motionless in the cold, and the corpses of birds and sea stars had been long since swept away. I spotted a glimpse of pink and plunged my arm into the water to pull up a single rainbow star, the only one I'd seen in a month. Three of its five arms were tiny regenerating stubs. We speculated about its brush with death, and whether this single survivor could become the grandmother to future generations. Its tube feet reached out to grip the rock. I made a mark in my notebook, and then put it back — extra carefully.

Erin McKittrick is a writer, adventurer and scientist based in Seldovia. She's the author of "A Long Trek Home: 4,000 Miles by Boot, Raft and Ski," the children's book "My Coyote Nose and Ptarmigan Toes" and "Small Feet, Big Land: Adventure, Home and Family on the Edge of Alaska." Her next book, "Mud Flats and Fish Camps: 800 Miles around Alaska's Cook Inlet," is due out in spring 2017. You can find her at GroundTruthTrekking.org.