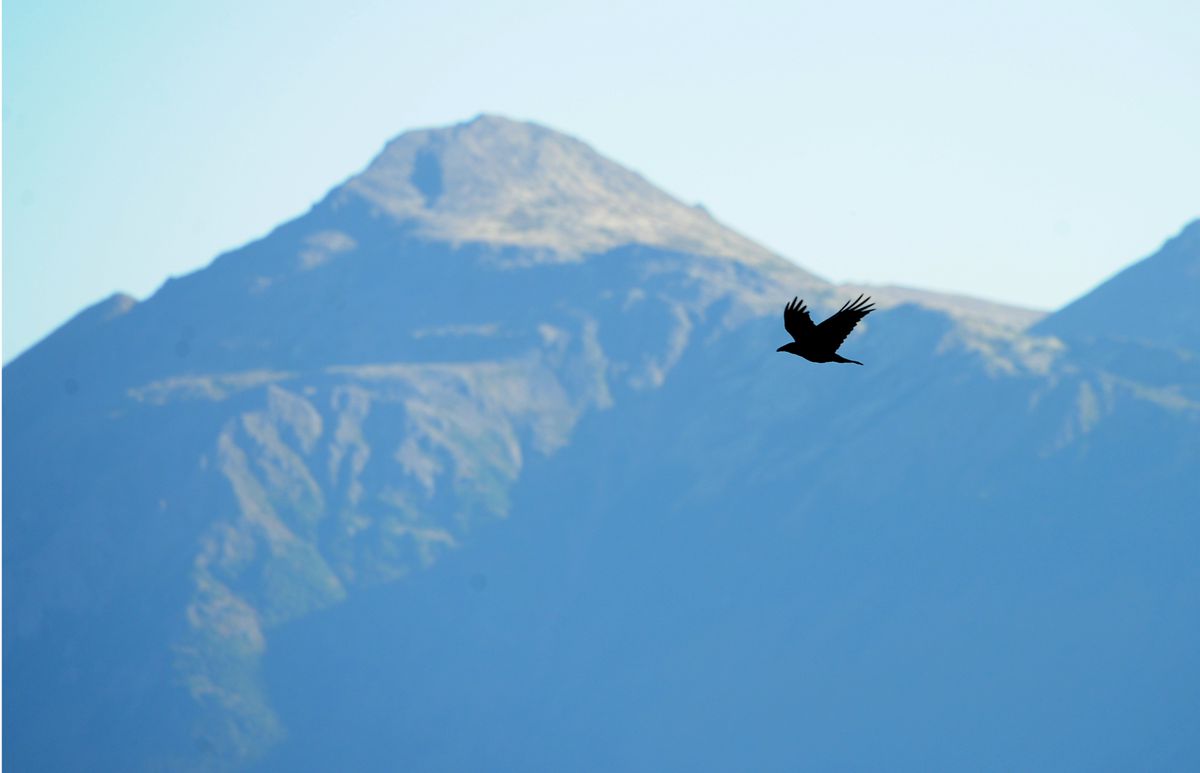 A raven flies over Potter Marsh along the Seward Highway across from Turnagain Arm, with the Kenai Mountains in the background. (Bob Hallinen / Alaska Dispatch News)

A raven flies over Potter Marsh along the Seward Highway across from Turnagain Arm, with the Kenai Mountains in the background. (Bob Hallinen / Alaska Dispatch News)

The Tao of Raven: An Alaska Native Memoir

Juneau's Ernestine Hayes, author of the 2006 award-winning "Blonde Indian: An Alaska Native Memoir," has returned with a second memoir that builds upon the first in even deeper, richer, more provocative ways. "The Tao of Raven" is a memoir that defies the usual definition of "memoir." Readers will find themselves pulled into a multilayered narrative of remarkable creativity, historical understanding, philosophical insight and empathy for all those who share the earth with us.

Hayes, who is Tlingit (as she puts it, "of the Eagle side of the Lingit nation") has a biography by now familiar to many readers. (Earlier this year, "Blonde Indian" was the inaugural book chosen for the Alaska Reads program, and Hayes traveled widely to meet with readers.) She was born and lived in Juneau until age 15, when she and her mother relocated to California. She didn't return "home" until she was 40, and she went to college in her 50s. She now teaches at the University of Alaska Southeast and frequently speaks about Alaska Native history, culture, the effects of colonization and the importance of place. She is a great-grandmother.

Like "Blonde Indian," "The Tao of Raven" is a richly woven story of Hayes' life and family, and, also like the previous book, little of it is told in the conventional sense of a memoir. Instead of being dominated by the "I" pronoun, the story consists largely of analogies and metaphor. These multiple storylines, all fascinating, cross and recross in ways that expand the meanings of all of them and present Hayes' one life in its multigenerational context.

Everything here connects — just as in life. Indeed, if there's a single thread that pulls through the entire fabric, it's this truism: The mountains connect to the sea, as the spider connects to the values of perseverance and respect, as the past connects to the future.

Hayes writes in one of the explicitly personal passages, "As the first grandchild of a non-nonsense woman who perceived the world in the old way, I listened to her stories and learned to recognize that everything is alive and everything is connected."

Even the title — "The Tao of Raven" — suggests this expansiveness. Hayes weds the ancient Chinese idea of tao, meaning a way, path or principle, to the character of Raven, prominent in Alaska Native mythologies. She begins the book with a retelling of Raven and the Box of Daylight, in which Raven uses his tricky self to become a baby who charms his grandfather into letting him open and release the man's boxes of starlight, moonlight, and finally daylight, to light the world.

Raven then leads us along many paths. One is the story of Ernestine the child, her mother, grandmother and other older family members and their dispossession from lands and home. Another, very briefly, takes us to California and back. Another presents a woman's dream of a snug cabin on a "scrap of earth." Another is of a grandmother loving a grandson. Yet another continues the stories of Old Tom and Young Tom, fictional characters from the first book. Among all these, we're treated to passages about the land, weather and beings both living and nonliving.

Beauty of the memoir

Within the personal writing, Hayes recounts a time when she joined schoolmates to fish at the Juneau dock, for once feeling the joy of inclusion, until one made a disparaging comment — "Look at that drunk Indian carrying that fish. Let's get out of here." The man with the fish was her beloved grandfather.

Complementing that, the lives of the two Toms and the women and children they connect with are closely examined here. Especially memorable is the story of one of those children and the do-gooder white woman who takes her in as a foster child; a reader gradually comes to see the analogy to assimilation and the destruction of one way of being to replace it with another.

That is one beauty of this memoir — without lecturing about the legacy of colonization and its intergenerational trauma, Hayes lets us enter the worlds of real and imagined people (as well as ravens, seals and glaciers.) We get to feel for ourselves the emotions of shame, anger, hopelessness, resilience, strength and love that flow through the weave of stories.

A second beauty lies in the writing itself: a lyrical, flowing prose. Here's that little girl on the dock, with her classmates, her grandfather and a halibut. "Finally we all stood too close to one another, within the distance of a man's height, his reach, his life, the white children I'd dared to imagine as my friends staging their retreat behind me, ready to dash for the safety of another world, my grandfather in front of me, offering a whiskered smile, saluting me with the heavy flatfish he proudly held up for my regard and admiration, I at the torn seam of two worlds, dreams faded like dappling sunlight, the only choice no choice at all, to embrace the life that had been designed for me no less than the lives that had been designed by these children's parents for us all, to give back the proud smile my grandfather offered, to know that despite the fish slime, despite the days-old whiskers, despite the headache and lost fingers and sharp grief, here was a man who understood what it meant to be proud."

"The Tao of Raven" should be widely read, in and out of schools, if Alaskans are to understand something of what it means to belong to this place and the history that brings us to this moment in time and our relationships with one another. Ernestine Hayes is a gifted and gifting teacher, opening for us a box of light.

Editor's Note: This reviewer is a former teaching colleague of the author's.