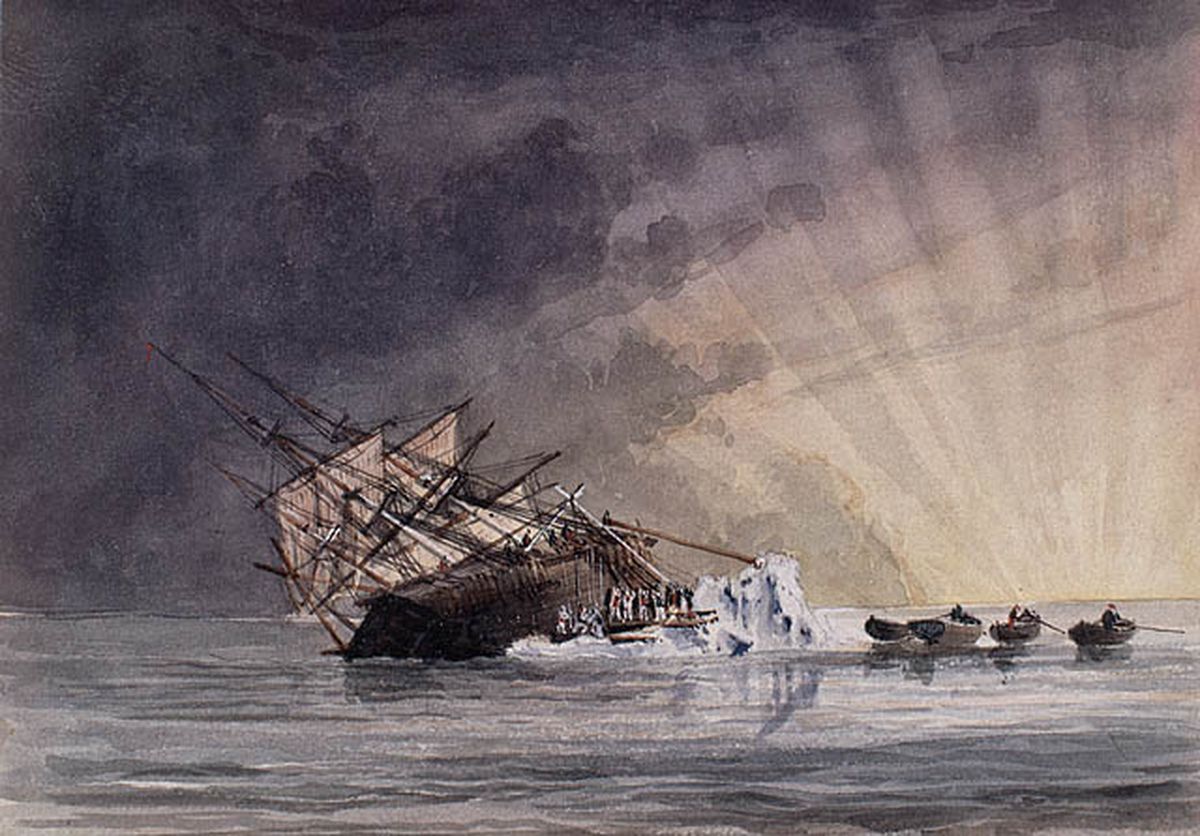 An illustration of the position of one of the Franklin Expedition’s ships, the HMS Terror, at sunrise on July 14, 1837. (Owen Stanley, Library and Archives Canada)

An illustration of the position of one of the Franklin Expedition’s ships, the HMS Terror, at sunrise on July 14, 1837. (Owen Stanley, Library and Archives Canada)

Lines in the Ice: Exploring the Roof of the World

The Arctic has long obsessed the European mind. There's evidence the ancient Greeks had limited knowledge of the region. The mythical land of Hyperborea, mentioned by the fourth century B.C. historian Herodotus, enjoyed 24-hour sunshine, indicating the story's origins sprang from Arctic experience. Pytheas, an explorer of the same era, introduced the Western world to the land Thule, which he claimed to have visited in the far north. From that time forward Thule remained part of Europe's mythological understanding of the world beyond the continent's northern horizon.

These stories continued to circulate throughout Europe, but nearly 20 centuries would pass before technology and geopolitical concerns drove explorers into the high latitudes, searching for wealth and national power. As Philip J. Hatfield, curator for mapping at the British Library, explains in "Lines in the Ice: Exploring the Roof of the World," the impetus came from the discovery of the Americas by Western society.

Shortly after the West found the New World, Pope Alexander VI awarded all its lands to Spain and Portugal, leaving England, then a rising power, scrambling to expand its own reach and holdings. Thus in 1576, Martin Frobisher was dispatched by the British crown on the first of what would be three centuries of failed efforts at locating the Northwest Passage, seeking a passable route over the top of North America that could speed trade with Asia. Millions of British pounds and hundreds of British lives would be sacrificed to this futile objective.

That lengthy string of journeys into the Arctic is recounted in the central portion of this book, which has been published in conjunction with a recent British Library exhibition titled "Lines in the Ice: Seeking the Northwest Passage." The book, however, ranges further than the exhibit. Through both text and images, it's an examination of how Europeans encountered the Arctic, how the Arctic impacted Europeans and how the indigenous people dealt with the upheaval and changes Europeans brought.

It's a hefty objective, and all of these histories have been explored far more extensively in other books. What sets this one apart, however, is the images. The British Library is not usually foremost in people's minds as a storehouse of Arctic-related archival materials. But as this book makes clear, the institution holds a remarkable collection and the bulk of what's pictured here come from it. Much of what is seen will be new to even the most rabid Arctic history fanatics.

Particularly fascinating is a series of maps scattered throughout, showing how human understanding of the Arctic evolved. The first is an Inuit map, actually a piece of driftwood carved in the 19th century to mirror a section of Greenland coastline. Used by the Inuit for centuries, these maps were intended to be employed through touch rather than sight, giving users a literal feel for the land.

From there, Hatfield takes us through the Age of Exploration as Europeans slowly pushed west over the top of North America and later approached the Arctic from the Alaska side as well. Some maps are crude, others are artistic masterpieces and some are works of wishful thinking. The British, obsessed with the fabled Northwest Passage, wanted to believe that North America was far smaller than it proved to be and mapmakers complied by drawing it that way.

Later maps show the expanding knowledge, and by the 20th century they reflect concerns such as the sovereignty claims of Canada and the Soviet Union, and the intercontinental ballistics plans of the Cold War. The most recent are digital and satellite images demonstrating rapidly shrinking polar sea ice.

Hatfield devotes considerable time to the quest for the Northwest Passage and how Britain's Arctic fixation found its way into the country's culture. Midway through the book he points out that Mary Shelley's 1818 novel "Frankenstein" began and ended aboard a vessel in the Arctic Ocean that becomes locked in the ice, forewarning what was to come.

"Shelley's use of the Arctic and its capricious ice as a dramatic device illustrates the other side of popular fascination with the Arctic. Despite believing in Britain's ability to conquer the world, people were also thrilled by the inherent danger of the project at hand … It is hard to know whether Shelley was especially prescient, or whether the Arctic ice simply provided a useful (and terrifying) backdrop for the book, but her take on Arctic exploration would turn out, over the next half-century, to be remarkably accurate."

Thirty years after Shelley published her classic horror tale, Britain would be ablaze with questions of what had befallen the Franklin Expedition. Sent out with great promise and acclaim in 1845 with two ships and 129 men charged with finally threading the Passage, it was never seen again. The calamity remains core to all Arctic history and the horrors of slow death and cannibalism that befell the crew were far worse than Shelly's imaginings.

This book went to press prior to the recent finding of the Terror, the second of Franklin's sunken ships found after a century and a half of searching, but Hatfield does discuss the 2014 discovery of the Erebus, the command vessel. What Hatfield says about the Erebus is true for the Terror as well: both were finally located in part via Native oral history accounts of where they went down. For more than a century, Inuit knowledge of the ships was ignored, an irony compounded by the fact that the British explorers who ignored Inuit knowledge often met fatal or horrific ends. The Norwegian, Roald Amundsen, who listened to and observed the Inuit closely, would be the one who finally navigated the Northwest Passage successfully.

"Lines in the Ice" doesn't break new ground in its text, although it is a good general introduction to Arctic history for neophytes. The images, however, are wonderful. Paintings, sketches, photographs and maps bring this history to life in ways words cannot. For this reason alone, it is absolutely essential for Arctic obsessives everywhere.