A citizen effort to document and collect Alaska bird carcasses 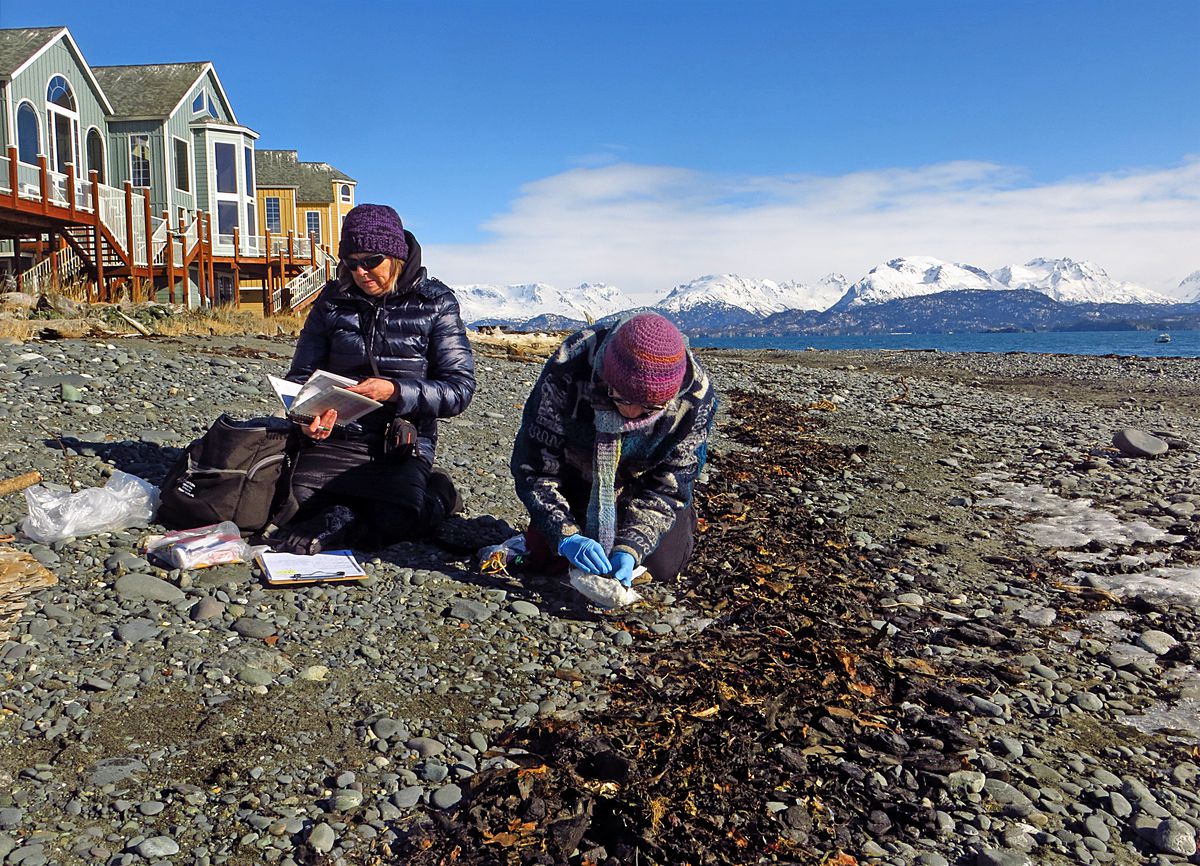 Carol Harding (left) and Janet Klein, both COASST volunteers, work through a step-by-step process as they attempt to identify a dead seabird washed up on the tip of Homer Spit on March 16, 2017. (Clark Fair)

Carol Harding (left) and Janet Klein, both COASST volunteers, work through a step-by-step process as they attempt to identify a dead seabird washed up on the tip of Homer Spit on March 16, 2017. (Clark Fair)

HOMER — Janet Klein was first to spot the dead bird. "Here's one," she said matter-of-factly.

Carol Harding and I shuffled across beach rocks to join her.

At Klein's feet, nestled in sand and stones just above the highest wrack line on the ocean side of the condominiums at the Homer Spit terminus, lay a 24-centimeter-long, black-and-white seabird, looking surprisingly fresh and clean despite its obvious lifelessness.

Wearing warm jackets, wool hats and sunglasses on this sunny-but-cold, mid-March afternoon, the women knelt on the sand beside the bird. From a brown knapsack came a clipboard, latex examination gloves, multicolored strands of yarn, measuring instruments, and a COASST "Beached Birds" field guide. Then, without fanfare, like the practiced citizen scientists they are, Klein and Harding went to work.

COASST, or the Coastal Observation and Seabird Survey Team, is a 17-year-old citizen science brainchild of the University of Washington. Established to track beached bird carcasses along Pacific Northwest coastlines, COASST has expanded geographically and in scope. Now survey teams — noting beached birds, marine debris and evidence of the human use of beach environments — gather data from northern California to the Arctic Circle.

In partnership with state, tribal and federal agencies, environmental organizations and community groups, COASST monitors the health of coastal ecosystems and creates baselines that help track sudden and subtle changes.

Klein and Harding are part of an effort that covers southern Kenai Peninsula beaches, encompassing a portion of Kachemak Bay from Miller's Landing to Mud Bay. That includes both sides of the Homer Spit to Bishop's Beach, Diamond Creek and north to Anchor Point. Statewide, much of Alaska's outer coast is covered, from Southeast to the Gulf of Alaska, the Aleutian Islands, and the Bering and Chukchi seas.

Harding took the COASST training course in December 2010 and then began monthly surveys of the beach from Homer boat harbor to the seafarer's memorial, less than a mile away. Klein joined Harding in May 2012.

"Every time Janet and I are on the beach, we see something new," Harding told me. "We have found 17 different species of dead birds, Japanese debris from the tsunami, dead marine mammals, squid, (seen) breaching whales offshore, seen each month how the tides and currents have reshaped the beach. It's also nice to know that in some small way I am contributing to something important."

As I hovered nearby with my camera and notebook on that blustery day, the two women, over the course of 15 minutes, employed a drafting compass, a measuring tape, a metric ruler and the field guide to carefully measure, identify, mark and photograph the dead bird they'd discovered.

They examined the bird's coloration and plumage patterns, plus precise details from its beak, wings and tarsus. Following the field guide's step-by-step process, they quickly identified the bird as a non-breeding marbled murrelet, very recently dead judging from the fact that its eyes were still intact and that its undamaged body had barely begun to stiffen. Klein tied off a green strand and a white strand of yarn to mark its identification for a photo and to keep the murrelet, if found again, from being recorded twice.

When she returned home, Harding uploaded a data sheet and photos of the murrelet to the COASST website, where the information became part of the organization's large database.

The murrelet had been clean — unencumbered by debris, not picked at by scavengers. Often, pristine specimens are not available. COASST volunteers have found birds tangled in nets, slimed with oil, or torn apart by the action of predators or tides.

As we walked the beach, Harding and Klein counted other people and animals on the same stretch. They kept an eye out for dead marine mammals, such as sea otters. They also collected garbage and looked for signs of environmental pollution. On other stretches of beach, volunteers note vehicular traffic, both motorized and nonmotorized.

On this same Homer Spit beach just over a year ago, Harding and Klein saw the astonishing die-off of common murres — just a few of the thousands of murres found dead on or near Alaska's southern coasts. In fact, said Harding, COASST observations in Alaska were what alerted the scientific community that the murres were in trouble.

"When we realized what was going on, we began a broad collaboration among a group of maybe 10-15 folks that (included) the COASST citizen science beached-bird program," said Heather Renner, U.S. Fish and Wildlife Service supervisory biologist in Homer. "We stepped up major efforts to both send carcasses for testing as well as get more areas surveyed."

In spring of 2015, "we first started observing murres in distress swimming close to shore and hanging out on the beaches, which was very unusual behavior," Harding said. "The murres started to die off at a rapid rate, and every month we found more and more of them. We knew they were in trouble because normally you don't see them during the winter. They fly out to sea."

200 carcasses in a month

The die-off peaked in February 2016, when Harding and Klein counted more than 200 carcasses.  Every month after that, they found fewer and fewer until June, when they discovered their last carcass.

Klein and Harding at first tried dutifully to measure and tag every bird, but by the peak of the die-off, the effort was overwhelming, both emotionally and from a practical standpoint. They continued to count and mark each bird, but (with COASST permission) they eschewed applying their detailed measurements to every murre.

Each tide seemed to wash in more dead birds. The highest tides pushed carcasses up around the foundations of the condos and the Land's Inn Resort. Eagles hauled carcasses onto back porches for more convenient feasting, leaving the remains wherever they finished dining.

"Homer, as home to one of the richest ecosystems in the world, faces constant human-induced pressures and threats to its environment," Harding told me. "I feel that us COASSTers, by being part of a large volunteer effort in hands-on data collection, are able to greatly augment gathering the information we need."

She cited the example of Mud Bay, on the eastern shore where Homer's Spit meets the mainland. "Years ago citizens of Homer didn't understand the value of Mud Bay to the thousands of migrating shorebirds. There were some that felt it was useless and suggested paving it over for a parking lot. We were able to show (by) our data collected over the past seven years of shorebird monitoring how critical Mud Bay actually was to migrating birds.

"Besides," she added, "I love any excuse to walk on the beach or be outdoors. Being a citizen scientist has greatly improved my observation skills. As a result, I see, hear and experience much more deeply."

Clark Fair is a freelance writer and a Kenai Peninsula resident of more than 50 years who lives in Homer.