The problem that Valdez just can’t shake: An infestation of bunnies 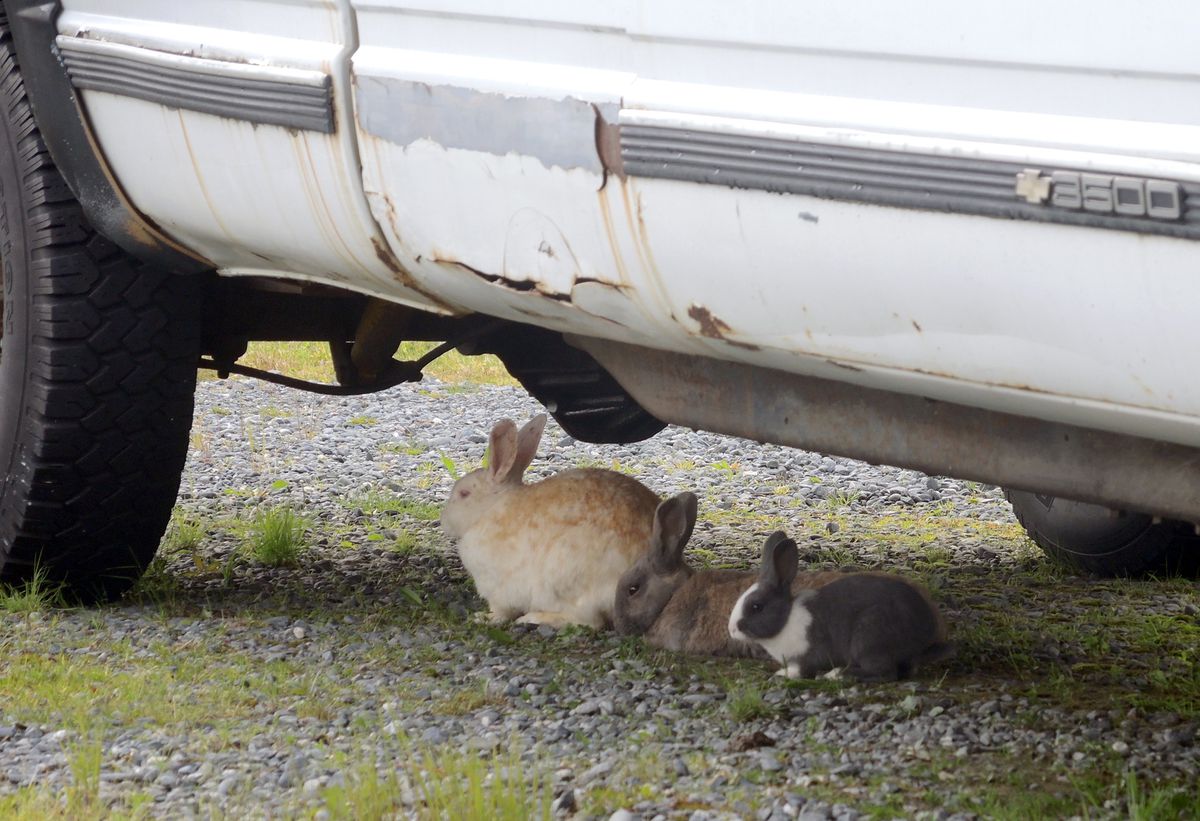 Rabbits of every color thrive in downtown Valdez. (Allison Sayer)

Rabbits of every color thrive in downtown Valdez. (Allison Sayer)

VALDEZ — At the Roadside Potatohead restaurant here, tourist conversation inevitably turns from bears, halibut and the like to another animal.

"Oh! There goes a gray one! See it, it just ran under that blue car!"

"How can they survive up here?"

"We saw two little babies by the harbor. One was tan and one was black. They looked so soft!"

Feral rabbits are as common in downtown Valdez as squirrels in other parts of the United States. There is no definitive account of how they got here, but several rumors persist. Some people say they're leftovers from a farm that predates the relocation of the Valdez townsite. Some say they are escaped pets or meat rabbits. One persistent rumor is that a large number of rabbits were intentionally released to entertain tourists during the 1980s. Perhaps there were multiple releases.

The rabbit (aka "bunny") population epicenter is downtown. Workers there spend the most time around the bunnies, and they have diverse opinions about them.

Karla Allen of South Central Hardware has mixed feelings. She acknowledges they're "cute little guys," and has "no hate in her heart" for the animals. However, she is disturbed by the damage to people's yards and gardens, the poop and the fact that the feral rabbits are not part of the natural fauna. "Why take something domesticated and release it?"

Kellye Linder at First National Bank is firmly pro-bunny. "I love the bunnies," she says. However, she acknowledges the bank had to replace its landscaping after the bunnies destroyed its first efforts. Judy Farmer, in the KCHU office, is also a "huge fan of the bunnies." She keeps track of the family behind her office and enjoys watching the babies grow. "Sure, they eat the flowers," she says, "but I put up a fence."

Lisa Glazer at Herbal Outfitters takes a live-and-let-live approach. "Some people hate them. Some people love them. As long as they leave me alone, I'm fine with them." Glazer reports being chased by rabbits looking for handouts, especially when she's carrying grocery bags. She does not enjoy that. However, she adds, "You have to get used to them. They're everywhere."

Last year, Alaska Dispatch News reported on a city and state multi-agency task force in Juneau to control a rabbit outbreak there. In contrast, the City of Valdez is laissez-faire.

According to Valdez spokesperson Allie Ferko, animal control officers will live-trap adult rabbits on public property if they're "determined to be a health hazard or … actively causing damage to public facilities." Private individuals can also borrow traps to remove rabbits from their own property. Live-trapped animals are simply released a few miles away from downtown.

Animal control will spay or neuter baby rabbits brought in by the public and put them up for adoption.

One factor that keeps the population high is winter feeding by some residents. Some do it grudgingly because they can't say no to the little animals when they beg. Others happily leave food scraps or pet food out. For every local who feeds rabbits, it seems there is another who vociferously opposes this practice. It can also create disputes between neighbors if one household attracts rabbits while another does not want them around.

But is it legal to feed feral rabbits?

According to Ferko, city code does not specifically address feeding feral domesticated rabbits. However, leaving food out for those rabbits has the potential to attract other animals, and feeding "wild animals, birds of prey, and deleterious exotic wildlife" intentionally or through negligence is illegal.

The Valdez Police Department is currently working on a municipal code recommendation to specifically define feral domesticated rabbits as "deleterious exotic wildlife." If this change goes through, intentionally feeding feral rabbits will become illegal. Violators could be hit with citations, and fines could increase with repeat offenses.

If the change to municipal code passes, nobody expects squads of officers to start patrolling the streets in search of offenders. However, in neighbor vs. neighbor disputes, anti-feeders will have the law on their side.

Valdez bunnies do get hit by cars and killed by dogs and eagles. Their numbers may also decline if the city chooses to clamp down on winter feeding.

However, they also have a not-so-secret weapon on their side: They multiply like rabbits.

Allison Sayer is a freelance writer based in the Copper Valley.