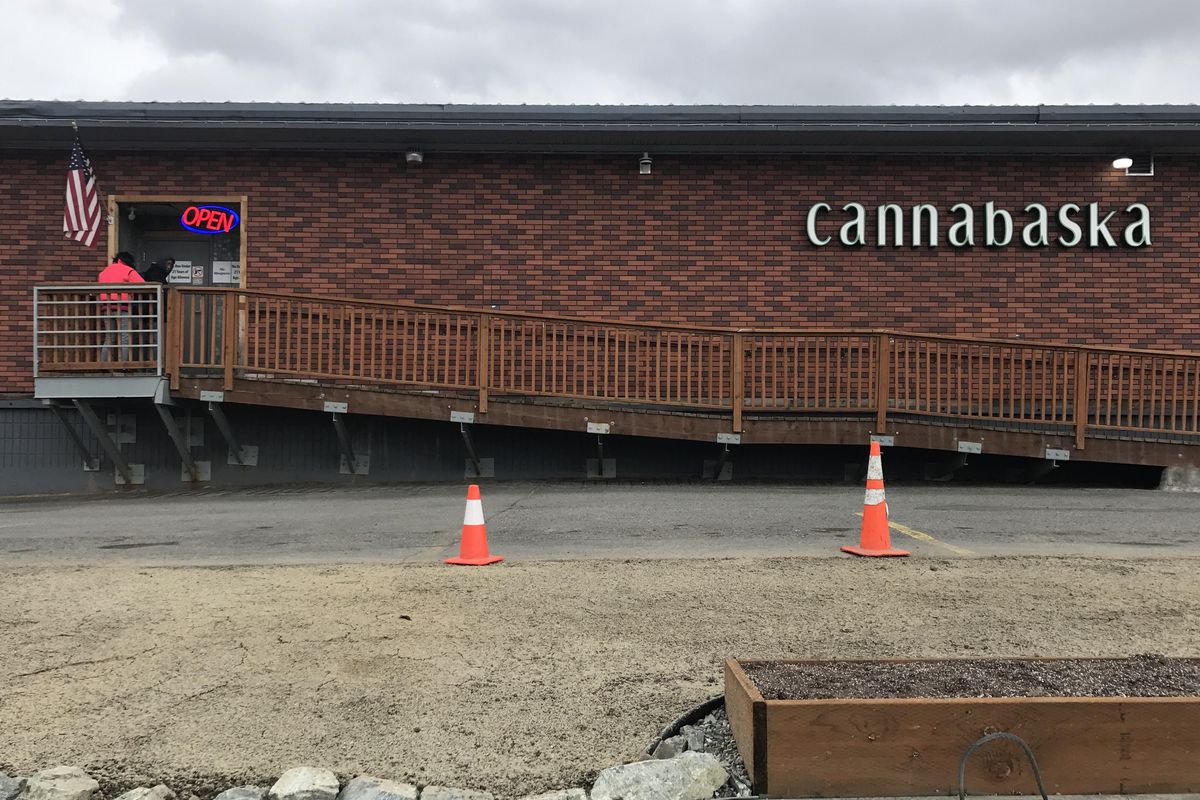 Alaska regulators stripped the owner of an Anchorage marijuana cultivation business of her ability to hold a license Thursday, several months after investigators found scraps of smokable cannabis plants on the ground near a dumpster behind the business.

Authorities also accused the West Tudor Road business, AlaskaSense LLC, of refusing an inspection when employees declined to open a dumpster for inspectors in February, claiming the lock was frozen. State records also show employees opened the dumpster shortly after investigators left, removed some of the contents and then called for an emergency trash pickup.

Smadar Warden is listed in state records as the sole owner of AlaskaSense, which also operates a retail shop called Cannabaska. Late Thursday afternoon, the state Marijuana Control Board voted to revoke Warden's handler permit, citing the waste around the dumpster. The decision means Warden can no longer grow or sell marijuana, though Warden can care for her plants pending an appeal, Erika McConnell, the director of the Alcohol and Marijuana Control Office, said in a prepared statement.

Cannabaska is "not licensed to sell marijuana at this time," McConnell wrote.

On Friday, Cannabaska had blue tape blocking the ramp leading up to its front door. A sign read: "CLOSED FOR MAINTENANCE. OPENING ASAP."

The board was particularly concerned about "diversion," or legal marijuana ending up where it isn't supposed to be, said Mark Springer, the chair of the Marijuana Control Board. In this case, AlaskaSense and Cannabaska are near a residential neighborhood, and the discovery of marijuana on the ground caused alarm, he said.

"Usable, smokable buds of marijuana on the ground, in front of a dumpster, behind a cultivation facility … it's diversion, plain and simple," Springer said.

The action against Warden appeared to be the most serious punishment levied against an operator in Anchorage's still-growing legal marijuana industry. Voters legalized recreational pot in 2014, and the first commercial businesses opened in Anchorage in 2016.

In December, a Fairbanks marijuana business, Frozen Budz, became the first in the state to have its license revoked after inspectors found mold in its edible products.

Spring said he expected the state board's decision to be appealed. An attorney for Warden wasn't immediately available for comment Friday.

In a meeting with Anchorage Assembly members Thursday morning, AlaskaSense representatives tried to offer explanations. Evan Neal, the chief operating officer, said the equipment used to grind and destroy cannabis plants was broken. He also said they had been victim of repeated break-ins at their dumpster.

He said the inspectors' reports looked "condemning" but the business had been doing its best to follow the rules.

The episode dates back to December, when neighbors started to complain that a strong smell of marijuana was coming from the business. The complaints persisted into January.

On Jan. 30 and 31, a city code enforcement officer, Keith Collins, visited the property and saw what appeared to be cannabis plant waste on the ground by the dumpster, according to an administrative hearing report on the incident.

Collins said he showed the owner, Warden, the cannabis waste and told her it was "unacceptable," and that she had understood. He said he gave her a copy of her own operational plan, which said waste was to be ground up and mixed so it couldn't be used.

Two weeks later, city and local law enforcement officials visited the business on Feb. 16, a Friday. Two state investigators, James Hoelscher and Kendrick Whiteman, arrived at 1 p.m. and spoke to Warden and Neal, according to a May memo Hoelscher wrote to the Marijuana Control Board.

About 1:30 p.m., the investigators went to inspect the dumpster. It was locked with a single padlock. The inspectors observed numerous pieces of cannabis on the ground that "were not rendered unusable," Hoelscher wrote in the memo.

In one photograph in the file, an inspector holds a ball of plant scraps and a stem in the palm of his hand.

The officials then asked to look inside the dumpster. Employees brought back a key that did not match the number on the lock, the inspector wrote.

After multiple tries, the dumpster wouldn't open. Employees said the lock was frozen.

Hoelscher and Whiteman then asked to see the business's mulcher, which destroys marijuana. Neal said he didn't know where it was, that it had broken some time ago and they hadn't yet bought a replacement.

After that, the state inspectors left. Two city code enforcement officers tried for about 20 minutes to open the dumpster, without success. Officer Rick Fern retrieved a bolt cutter, but the employees refused to use it. Fern confirmed with Warden and the managers that they were refusing an inspection, the records say.

Fern and the other officer, Collins, then left. About five minutes later, video surveillance footage showed employees had opened the dumpster and were removing items from it.

At 2:26 p.m., Neal called Fern back and said they had the lock off and the inspectors could come back. Two minutes after that, Neal called Northern Waste, a trash hauling company, to request an emergency trash pickup.

By the time Fern and Collins returned, the dumpster had been emptied except for some apparent whole cannabis leaves and plant material on the bottom, Collins wrote in his report.

Speaking Thursday to members of the Anchorage Assembly, Neal insisted the business had not been refusing an inspection. He said they didn't want to destroy their property by breaking the lock.

He called the removal of items from the dumpster a "gut action" from employees who were under duress. He said the employee had thought the material could be ground up better. Another representative of the business chimed in and said it wasn't unusual to call for an urgent trash pickup.

Neal said that if the business could go back and cut the lock, it would.

"We really didn't have anything to hide," Neal said.

Neal said later in an interview that there were many reasons the business might have been throwing away marijuana plant products, including contamination. He also said he felt the business had been unfairly targeted by regulators.

Fern told members of the Assembly on Thursday morning he'd returned to AlaskaSense and concluded the waste issues were resolved. He said AlaskaSense had paid a $1,100 fine for refusing an inspection.

But Springer, the Marijuana Control Board chair, said there are many ways that marijuana businesses are turning smokable plants into legitimate waste. He said he didn't understand how it had wound up on the ground.

"Buds laying on the ground, we're not getting that," Springer said.

Before and after: How retail marijuana has changed storefronts across Anchorage