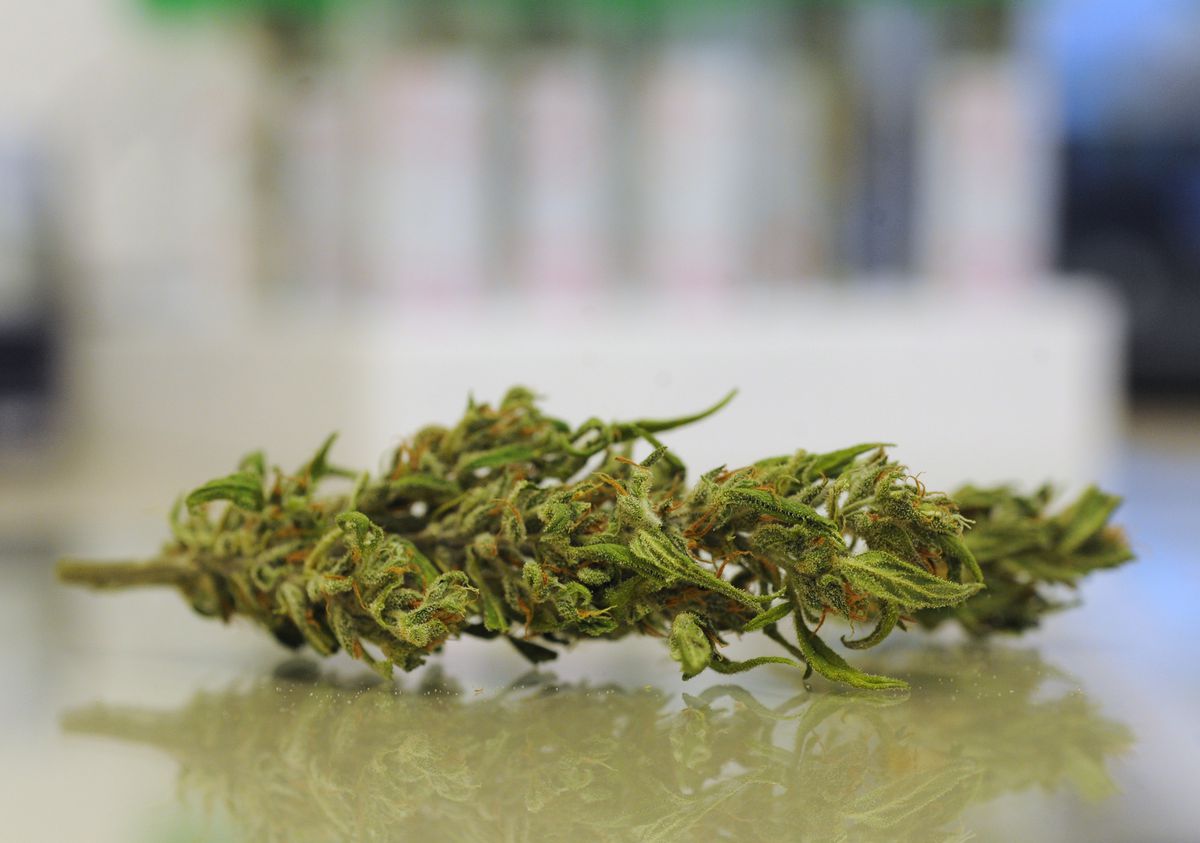 In Alaska's cannabis stores, a trend has developed: Marijuana is often priced by its potency.

Much like the alcohol percentage displayed on a bottle of wine, cannabis labels include THC percentages, which usually range from the low-teens to the mid-20s.

And just because a plant tests at a high potency doesn't necessarily make it better than another, lower-testing cannabis plant, some business owners say. In fact, Alaskans' push for high-THC products may have consequences for both consumers and business owners.

"Alaskans have an obsession with marijuana that tests over 20 percent (THC)," Brandon Emmett, a Marijuana Control Board member and a cannabis manufacturer, said in April. THC is the psychoactive ingredient in marijuana that gets people high.

"They very much are buying on potency," Huss said of Alaska consumers. "I don't see that going away anytime soon."

Marijuana that has higher levels of THC is often called "top-shelf" by stores. The price difference can be considerable, Huss said.

Jessica Alexander, lab director at The New Frontier Research, a marijuana testing facility in Wasilla, said the trend was threatening to bankrupt growers who produce marijuana that tests below 20 percent THC.

"It's real nonsense, but it's driving the cost, and it's going to drive people out of business," Alexander said.

Like other states, Alaska has struggled to parse out testing discrepancies between different labs in an emerging industry lacking federal standards.

For months, the operators of Anchorage lab Steep Hill complained of discrepancies between their lab and the other Anchorage lab, CannTest, during state Marijuana Control Board meetings.

Steep Hill suspended operations on March 31 after landlord Wells Fargo evicted the Midtown business due to its association with the cannabis industry. But the owners say testing problems remain.

"This state lacks the ability to adequately regulate testing," said Tim Hinterberger, scientific director for Steep Hill, citing a lack of resources devoted to the issue. Hinterberger has penned two op-eds about his take on the testing problems.

In January, Alcohol and Marijuana Control Board director Erika McConnell warned consumers that the two labs were coming up with different results. (McConnell also co-wrote an op-ed in response to Hinterberger's criticisms.)

The discrepancies spurred an audit of the labs at McConnell's request. On June 4, the Alaska State Environmental Health Laboratory issued its audit report that outlined discrepancies between labs and some issues in their processes.

Lab owners and the state both say a big part of the challenge is that cannabis testing lacks the standardized procedures found in other fields, like soil or water testing.

For example: When a testing facility is given marijuana bud, each lab does its own sample preparation. In that process, the bud is mixed with reagents — things like solvent — and put into the testing instrument.

That part of the process is most likely to give you varying results, said Crupi, because each lab conducts this process in their own way.

"There are no standards," Crupi said.

Labs can run a test to make sure their machine is calibrated properly and giving precise, reproducible results. Both Anchorage labs completed that test and showed their machines were consistent, Crupi said.

But the results still differed. So which lab was right?

"We don't know who's accurate," Crupi said. "From a consumer standpoint, that is a concern," he said.

CannTest was the first lab to open in Alaska. CEO Mark Malagodi said marijuana isn't a homogenous plant. Different parts of the same plant may come back with different test results.

For a grower bringing in the same strain repeatedly, Malagodi usually sees "plus or minus three percent" in the potency testing — a potential for a 6 percent difference overall.

Malagodi said that initially he thought the lab's main focus would be on the health and safety side, like testing for mold.

"But as things have evolved, our focal point has really been a price point," Malagodi said.

The state still only has two labs – CannTest and The New Frontier Research — with at least three more in the midst of the application process.

Alaska's struggles aren't unique – other states have grappled with cannabis testing discrepancies too.

In Washington, where 16 labs are operating, the state marijuana board has contracted with Washington's Department of Agriculture to do neutral third-party testing, said Brian Smith, spokesman for the Washington State Liquor and Cannabis Board.

That third-party testing comes back with about 75 tests — selected randomly and based on complaints — per month, Smith said.

Washington's path is similar to what Steep Hill director Brian Coyle hopes will eventually happen in Alaska. "You need a state testing lab," Coyle said. With that, labs could be audited and proposed procedures reviewed, he said.

Alaska efforts have begun to fix the testing problems. Crupi has drafted a preliminary guidance document for labs. The Marijuana Control Board voted to adopt preliminary recommendations on tweaks to the testing regulations, but even the easiest topics took months to iron out, and recommendations must still go to the Department of Law for review, said Jed Smith, local government specialist with the Alcohol and Marijuana Control Office.

"There's no easy answer to any of this," McConnell said.

McConnell said her office was in discussions with the Alaska Department of Environmental Conservation about options for third-party testing, but no decisions had been made. The Marijuana Control Board is hoping that the DEC will eventually be in charge of overseeing the labs, but the state Legislature would need to make that change.

Alaska's focus on high-THC products also has consequences for growers. New Frontier Research lab director Alexander said she "overwhelmingly" sees growers "heartbroken" because their marijuana tests at less than 20 percent THC — because they know they won't be able to recoup their costs. "That's just so wrong," Alexander said.

Alexander works with vendors who service other states where marijuana is legal. "They all laugh at this (20 percent) thing," she said, because there's far more to marijuana than THC.

'Don't just snub your nose at it'

Beyond Alaska's struggles to ensure accurate testing, there are other reasons to base your purchases on more than just potency.

Alexander compared buying marijuana to alcohol: On a Saturday night, when you're looking to relax, would you buy Everclear simply because it has the highest alcohol content?

"Personally, I take potency into account when I purchase cannabis, but I tend to look at all the factors," Huss said. For Huss, it's the way the bud looks and smells; how dense the bud is; how the bud has been trimmed.

But "ultimately, you have to try it," Huss said.

Some strains may look beautiful but don't produce the desired effects. Others may not be pretty or are "overlooked because of the numbers on the label," Huss said — but are actually good strains.

Huss is also seeing emerging trends in how people buy marijuana. One is that folks are becoming more discerning about terpenes, chemical compounds in marijuana that work together to create different effects, flavors and smells.

Every cannabis strain has a different terpene profile. Alexander said around a hundred have been identified.

"Every plant, every strain is different, and they present different combinations which create different sensations," Alexander said.

Huss said Great Northern Cannabis is starting to put terpene information on the label alongside potency as people begin to zero in on the compounds that they believe work best for them.

Another emerging trend is CBD. CBD (cannabidiol) is a non-psychoactive component in cannabis that is used to treat maladies such as chronic pain and epilepsy – even in pets.

CBD is becoming a "huge thing, not just for cannabis consumers but for consumers as a whole," Huss said. For his company, that means more demand for CBD marijuana and CBD vape pens.

Emerging trends aside, what about a person who is walking into a marijuana shop for the first time? What should they do?

"You can always have more, but it's really hard to come off of a bad trip if that's not what you're looking for," Huss said.

Low-potency marijuana (14 percent or so) is a good place to start, he said. Vape pens let you easily regulate the amount of cannabis you take in. And edibles give you a chance to start with a very small dose that doesn't involve smoking, he said.

"Talk to the bud tenders, ask your friends," Huss said. "The big thing is just gathering as much knowledge as you can.

"Don't just snub your nose at it because it didn't test as high as you like."

Here's why the price of pot is dropping in Alaska

Cannabis for dogs? A look behind the CBD pet treat trend