Into the pot you go: Maine restaurant sedates lobsters with marijuana smoke 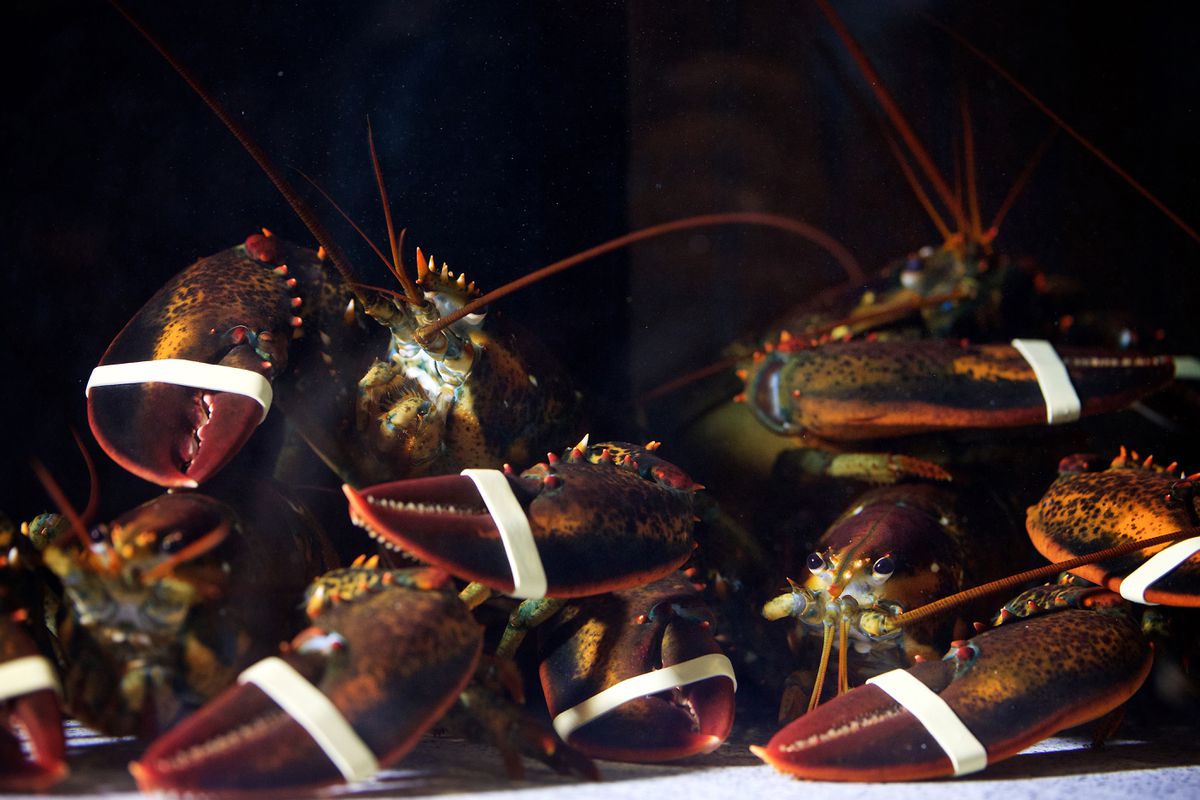 Lobsters await their fate in a seafood-restaurant tank. Photo for The Washington Post by Deb Lindsey

Lobsters await their fate in a seafood-restaurant tank. Photo for The Washington Post by Deb Lindsey

Lobsters in one Maine restaurant go out in a blaze of glory once they hit the pot. The owner of a lobster joint is sedating her crustaceans with marijuana smoke before cooking them - granting them, she says, a blissfully humane death.

Charlotte Gill, owner of Charlotte's Legendary Lobster Pound in Southwest Harbor, told the Portland Press Herald that she had been looking for a way to reduce the suffering of her signature menu item. She experimented with blowing marijuana smoke into a tank with one lobster, Roscoe (basically, she hot-boxed him). When Gill then removed Roscoe's claw bands and returned him to a tank with the other lobsters, she says, he was less aggressive. Gill has a medical marijuana license.

She plans to offer this cooking method as an option for customers who want their lobsters to be baked before they're boiled. But that doesn't mean customers will get stoned from their dinner.

"THC breaks down completely by 392 degrees, therefore we will use both steam as well as a heat process that will expose the meat to 420-degree extended temperature, in order to ensure there is no possibility of carry-over effect," Gill told the Press Herald. So where some see a humane death for the lobster, others see a waste of perfectly good weed.

Chefs and scientists have long pondered the question of whether lobsters feel pain. Experiments have shown that crustaceans are responsive to stimuli that cause pain, such as heat, but it is unclear whether this is a reflex or a pain response from their nervous systems. It's also unclear whether cannabis has the same pain-relieving effect on lobsters that it has on humans.

"We can't prove pain in any animal species," Robert Elwood, a professor emeritus of animal behavior at Queen's University Belfast, told the Canadian Broadcasting Corporation. "You can only do studies, and if they're consistent with the idea of pain, you begin to think perhaps we should give them the benefit of the doubt. It's what we call the precautionary principle, and [it] gives them some protection in case they do feel pain."

Other researchers disagree. "They can sense their environment," Bob Bayer, executive director of the University of Maine's Lobster Institute, told The Washington Post in January, "but they probably don't have the ability to process pain."

In New Zealand, as well as in the Italian city of Reggio Emilia, it is illegal to cook lobsters by boiling them alive. Earlier this year, Switzerland passed a law that live lobsters must be stunned before they can be cooked live.

Back to Charlotte's Legendary Stoned Lobsters. The news launched a thousand weed jokes on Twitter, including this one from Morning Air Show (@WXBQ_MAS): "Charlotte's Legendary Lobster Pound in Southwest Harbor, Maine is getting their lobsters high off marijuana smoke before killing and cooking them. They believe it to be more humane than the traditional methods. I wonder if they smoke sea weed??"

But People for the Ethical Treatment of Animals is not laughing. The vegan advocacy group, which once tried to erect a gravestone for lobsters killed in a truck crash, is opposed to boiling lobsters alive under any circumstances.

"It is highly unlikely that getting a lobster high would make a lick of difference when it comes to the full-blown agony of being boiled or steamed alive," PETA said in a statement to Marijuana Moment.

As for Roscoe the stoned lobster: To thank him for his service to all lobsterkind, Gill released him into the ocean, which must have been pretty trippy for him.