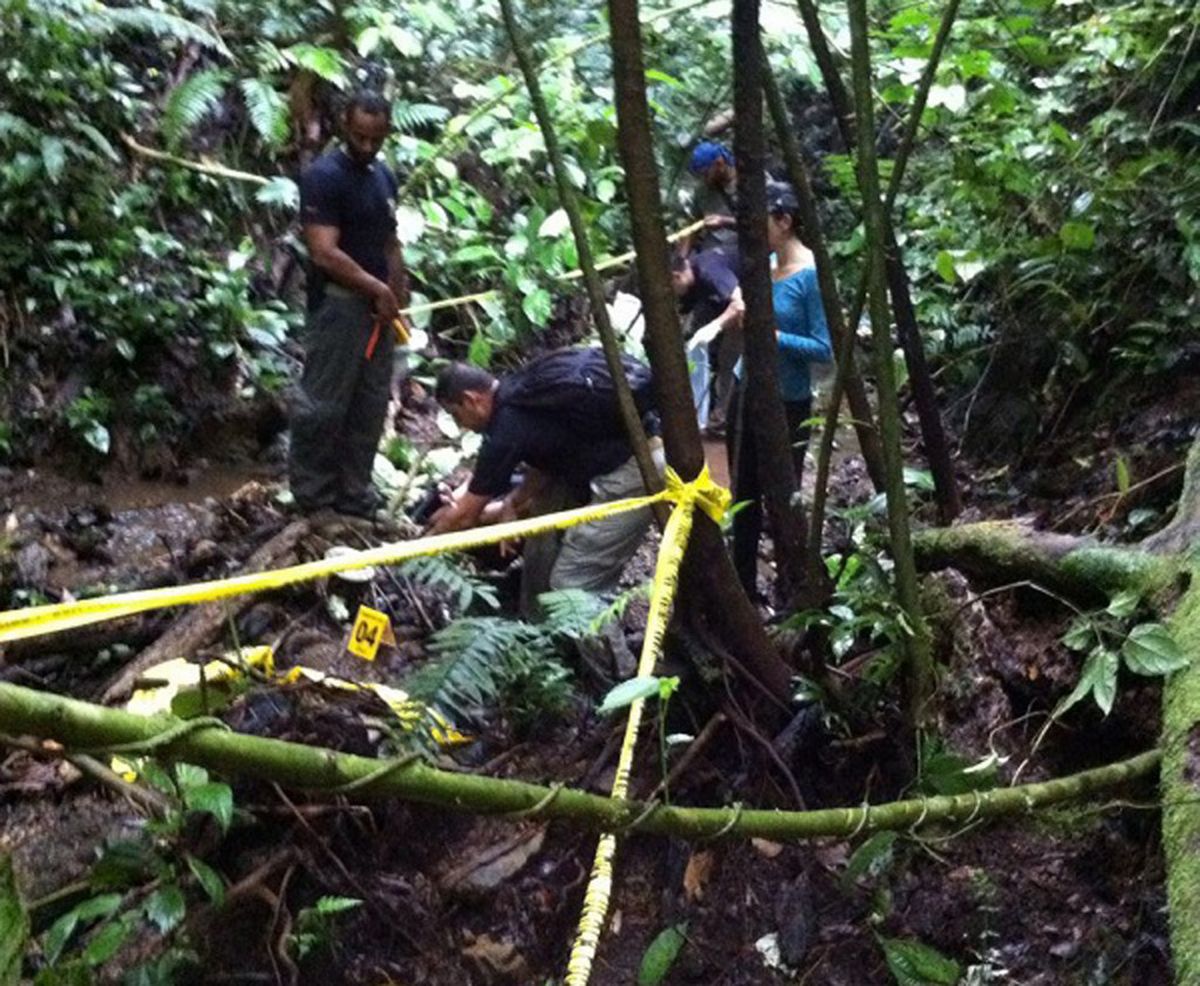 A forensic team investigates an area where human remains were found in Corcovado National Park during a search May 21-22, 2016. Identification and camping supplies that appear to have belonged to missing Alaskan Cody Dial were found along with the remains. (Courtesy Judicial Investigation Organization)

A forensic team investigates an area where human remains were found in Corcovado National Park during a search May 21-22, 2016. Identification and camping supplies that appear to have belonged to missing Alaskan Cody Dial were found along with the remains. (Courtesy Judicial Investigation Organization)

Investigators are still working to determine if skeletal remains found in a remote Costa Rican park belong to an Alaskan who went missing in 2014.

In an email Monday, his father, Roman Dial, who was there at the site with investigators, said they had found numerous items he believes belong to his son, including "his passport, money, map and compass, shoes, backpack, stove, machete, tarp, sleeping pad, mosquito net and more."

Roman Dial wrote that it seems likely the remains belong to his son but that they won't know for certain until the investigation is complete. That could take another month, he wrote.

In the press release from Costa Rica's Judicial Investigation Police, investigators said the remains were found by a local man in a ravine in Quebrada Doctor, located in a central part of the Southwest Costa Rican park.

Roman Dial said the location is "very remote," about 20 minutes from a "very little used" poacher and miner trail and about three hours from the nearest tourist trail.

Cody Roman Dial, then 27, went missing in the park in July 2014. According to investigators, Dial entered the park without a guide or a ranger and hasn't been heard from since.

Following the disappearance, his father, Roman Dial, searched extensively for him. Part of the search was featured in a National Geographic Channel documentary, "Missing Dial," that began airing Sunday. Much of the documentary focuses on the theory that Cody Roman Dial's disappearance was the result of foul play.

The investigation into the cause of death remains ongoing Monday, but a spokeswoman for the Judicial Investigation Organization told The Tico Times English-language newspaper that such a theory was unlikely.

"We are doing an examination of the remaining parts of the body to see if there are injuries that could be consistent with murder but it would have been a difficult homicide," OIJ spokeswoman Marisel Rodríguez told The Tico Times. "The team had to hike out in the morning and camp overnight to get the remains out of the park."

In the press release, investigators said the remote location required six hours of hiking to reach the remains.

Roman Dial wrote that his family is feeling "very emotional" about the discovery and they have mixed feelings.

"It's like being in the valley of sadness but on a little hill of relief," he wrote.

"Maybe a coincidence maybe not," he wrote. "… I also hung Tibetan Buddhist prayer flags high across my yard, from tree top to tree top and changed my Facebook profile picture as well as told an Arctic Entries story the week we came down. Coincidence?"