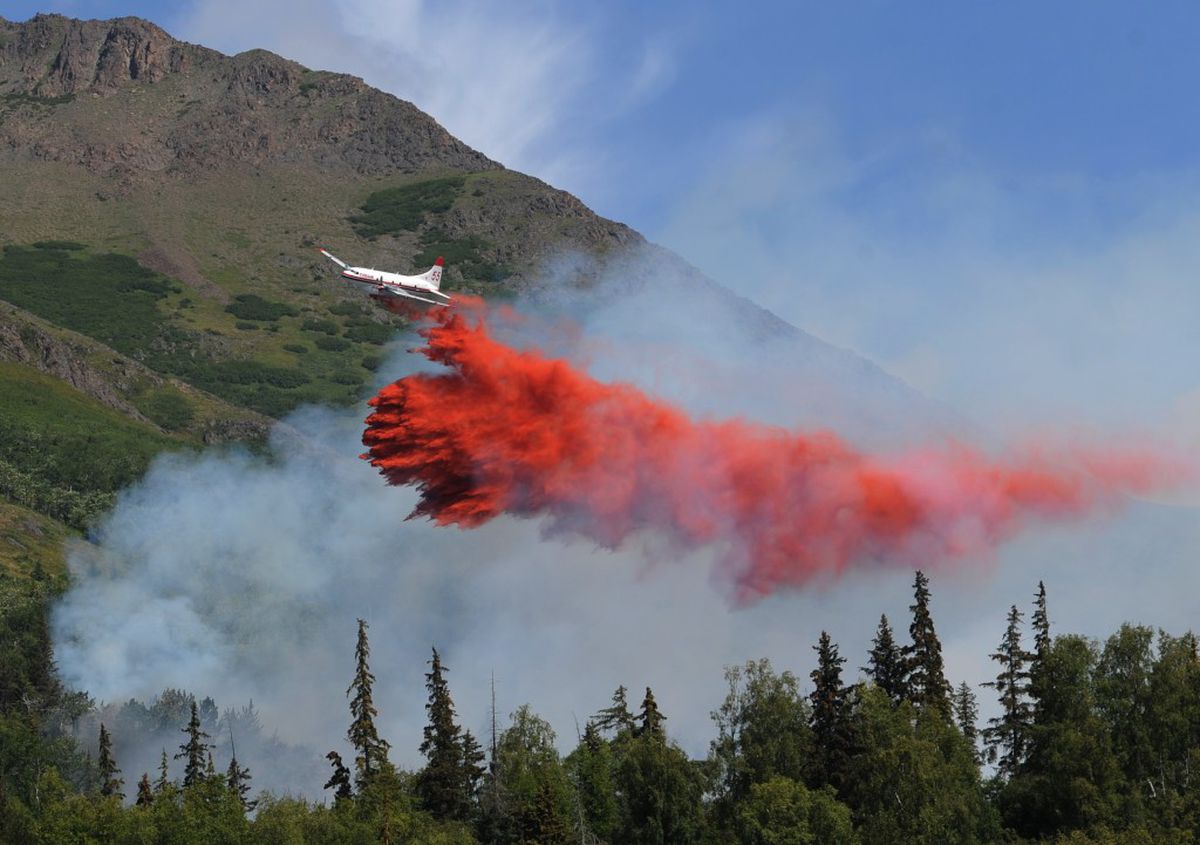 A Convair CV580 air tanker drops fire retardant on the wildfire at McHugh Creek in the Chugach State Park on Sunday, July 17, 2016, as the Division of Forestry attacked the blaze from the air and with wildland fire crews on the ground. (Bill Roth / Alaska Dispatch News)

A Convair CV580 air tanker drops fire retardant on the wildfire at McHugh Creek in the Chugach State Park on Sunday, July 17, 2016, as the Division of Forestry attacked the blaze from the air and with wildland fire crews on the ground. (Bill Roth / Alaska Dispatch News)

State forestry firefighters jumped on a backwoods fire near the popular McHugh Creek Trail that kicked up a large plume of white smoke over Cook Inlet Sunday, as throngs of travelers enjoying hot, sunny weather returned from weekend adventures on the Seward Highway below.

The McHugh wildfire was one of more than 100 new fires around the state that sparked up late in the week, following a three-day period with more than 45,000 recorded lightning strikes. State fire officials said Sunday they did not yet know the cause of the McHugh fire.

The fire was about three-quarters of a mile from the upper McHugh Creek parking lot, said Tim Mowry, a public information officer for the state Division of Forestry. It's located in a difficult-to-access area in the drainage, according to Tom Crockett, a park ranger for Chugach State Park.

By Sunday afternoon, the fire was estimated at between 25 acres and 40 acres. Crews busy responding to the blaze had not been able to definitively map the fire's boundaries, he said.

"It's sort of skunking around in beetle-killed spruce," meaning the flames aren't "super-active" and are not moving much, Mowry said Sunday morning.

Crews were expected to work through the night, and motorists were being asked to keep moving as they passed the fire to prevent crashes. Traffic along the Seward Highway was moving slowly Sunday evening as Alaskans headed back north from the Kenai Peninsula watched the helicopters filling their buckets with water from Turnagain Arm.

Burning cottonwood trees falling onto trails had also become a danger by Sunday afternoon, and the fire had also led to increased bear activity. The trails remained open, but officials urged hikers to stay away from the fire area, said Michelle Weston, an information officer for the Division of Forestry.

Early Sunday, the fire had kicked up a moderate to heavy haze of smoke about 2,000 feet high, said Crockett.

"It will be smoky to the south of us along the Turnagain Arm trail," Crockett said.

The fire is the third in the area this summer. At least one of those was caused by an illegal campfire that escaped, he said.

The Anchorage Fire Department first responded to the blaze late Saturday night but turned the fire over to the Division of Forestry, which sent a crew to the scene around 3 a.m., said Mowry.

The fire is in "rough country" more suitable for the division's crews, Mowry said.

The initial command crew assessing the fire at one point startled a bear and retreated after a cub clawed up a tree, Crockett said.

Crockett warned against the public trying to use drones to get a look at the fire, saying drones are illegal in state parks, and anyone who flies them near the fire could hamper the critical air attack needed to stop the blaze.

"We had a gentleman ask if we could fly his drone to look at it. Absolutely not, they are not allowed under our park regulations and they would definitely compromise aviation safety," he said.

Strong winds were expected on Monday in the area with low humidity, said Weston.

"It's going to be so hot and dry, so we're asking people not to do any burning they don't have to," she said.

Other fires burn around Alaska

Officials said Sunday they were hopeful that lower temperatures and more humid, wet weather in much of the state would help reduce activity.

On Sunday, the Division of Forestry was still attacking the 728-acre Tok River fire, a lightning-caused blaze 8 miles southwest of Tok near the Canadian border. More than 100 personnel were working that fire, Mowry said.

The state reported on Sunday afternoon that the fire was 18 percent contained.

"The fire is creeping in timber, light logging slash, and tall grass, with isolated torching. A column may occasionally be visible from the community of Tok and the highway," the division said.

The 1,170-acre Mid-Salcha fire near the Salcha River south of Fairbanks was getting help from wet weather and favorable winds, and firefighters who had built breaks to protect cabins, Mowry said.

"We're getting rain on that fire, and they're pulling a Hotshot crew off of it to send to the McHugh Creek fire," Mowry said.

There were 45 fires burning in Southwest Alaska on Sunday. One of those is the 550-acre Bear Creek fire about 50 miles south of Kuskokwim River village of McGrath. State forestry crews were helping protect cabins and a remote weather station there, Mowry said.

The Bureau of Land Management on Sunday reported the federal agency was:

• Protecting structures in a fire 25 miles east of Kobuk in Northwest Alaska, where a blaze had grown to an estimated 35,000 acres. The fire is located near the Gates of the Arctic National Park and Preserve. BLM Alaska Fire Service smokejumpers helped protect a lodge at Narvak Lake, about a mile southeast of the fire, the agency said.

• Responding to fires along the Yukon River that threatened structures upriver from the village of Rampart and near a Bible camp downriver from Tanana.

• Finished mopping up the Starvation Creek fire north of the Elliott Highway, about 13 miles north of Minto. The roughly 2-acre fire was spotted on Friday near the Interior Alaska village.