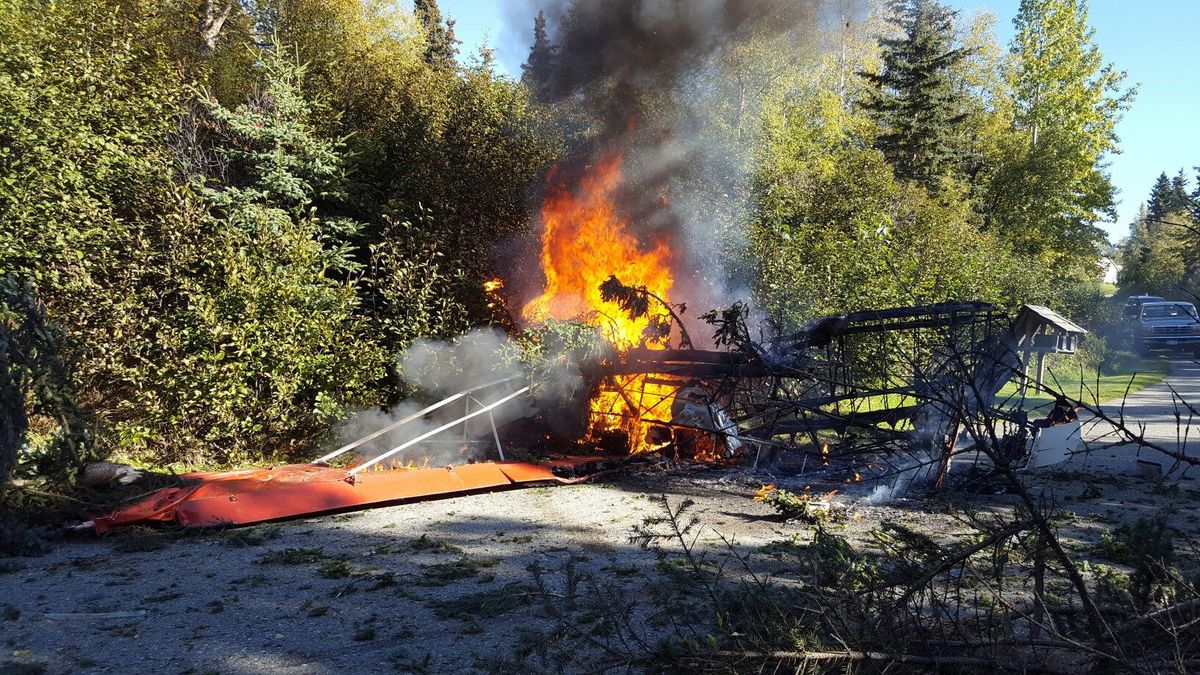 A plane caught on fire after crashing in the Hillside neighborhood of Anchorage. (Photo by Jason Thompson)

A plane caught on fire after crashing in the Hillside neighborhood of Anchorage. (Photo by Jason Thompson)

Update, 11:50 a.m. Sunday: Anchorage police on Sunday identified the pilot and sole occupant of a plane that crashed Saturday evening on the Anchorage Hillside as 75-year-old James Hefty.

His family has been notified, Anchorage police said.

The National Transportation Safety Board was continuing to investigate the crash, and asked any additional witnesses to call 907-782-4849.

"The NTSB is asking that if anyone either witnessed the crash, or saw the plane flying in the area just prior to the crash, to please call the NTSB if they have not already been interviewed," police wrote in a Sunday morning statement.

Original story: A small, homemade floatplane crashed and burst into flames on a street in a major residential subdivision on the Anchorage Hillside Saturday afternoon, killing the pilot, the only person on board, and his dog, authorities said.

No home was struck or damaged and a man walking his dog on the street just as the single-engine plane came down was uninjured, they said.

The crash was reported at 4:30 p.m. on Crooked Tree Drive just north of Treeline Court. The site was less than 1 mile from the O'Malley Road fire station, and crews were on scene within minutes and quickly extinguished the blaze, said Assistant Anchorage Fire Chief Erich Scheunemann.

Neighbors reported hearing and seeing the plane circling low over houses and treetops. One said it made a pass at a safe altitude before making a second pass much closer to the ground just before it crashed.

The skeletal aluminum frame of the plane was upside down on the side of the road, a blackened, downed spruce tree nearby.

A woman from the State Medical Examiner's Office first removed the dog from the incinerated plane, wrapping it in a white cloth she carried with both hands. Then the pilot's body was removed in a shroud on a stretcher.

The cause of the crash wasn't immediately known. Clint Johnson, chief of the National Transportation Safety Board's Anchorage regional office, was on scene and leading the investigation with assistance from the Anchorage Police Department, which had interviewed some of the witnesses.

Johnson said the aircraft was a homemade plane similar to a Super Cub. The plane first clipped some trees before crashing and its floats remained stuck in the trees.

Johnson said the plane was fueled by gasoline stored in wing tanks, which ignited and burned the plane's fabric shell and partially melted its aluminum frame.

Authorities had not determined the identity of the pilot Saturday evening and Johnson said they were assuming it was man, though they weren't positive. Police had an idea about who the pilot was, and some officers were with the family of that person, Johnson said.

Though the plane was badly burned, some cockpit instruments might yield clues about what happened, he said.

Johnson said he hadn't determined where the plane had begun its flight. He said he wasn't sure yet about the plane's registration number.

Keith Kniegge, who lives on Double Tree Court, a nearby street, said he was sitting at his computer when he heard the plane.

"It was really low, really close to our house," Kniegge said.

He said the plane came from the south and banked right as it headed toward Crooked Tree Drive.

Johnson said he was at his home in South Anchorage when he heard sirens. Then he got the call it was a plane crash.

While a lot of the clues that might explain the crash were burned, the investigation would benefit from the neighbors who saw and heard what happened, Johnson said.

"We're blessed with a number of witnesses, a lot of them pilot-rated," Johnson said at an impromptu news conference at the scene. The witnesses told authorities the pilot had made a couple of low passes over the neighborhood before crashing, Johnson said, barely missing the pedestrian and his dog.