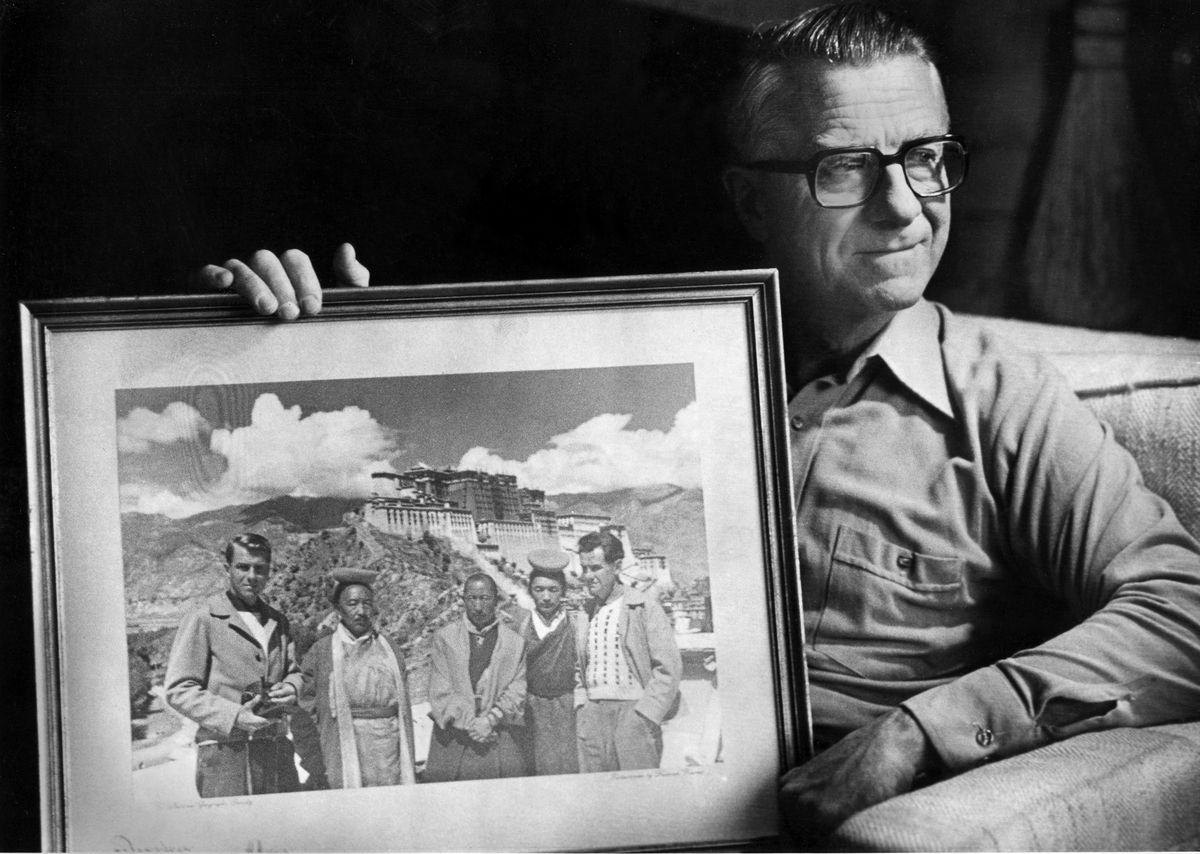 Lowell Thomas Jr., who served as Alaska's lieutenant governor from 1974 to 1978, died at his home in Anchorage on Saturday. He was 92.

Thomas was born in London on Oct. 6, 1923, the son of journalist Lowell Thomas and his wife, Frances.

Thomas Sr. achieved international celebrity as a correspondent in World War I, during which he reported on the campaign of T.E. Lawrence, aka "Lawrence of Arabia." He was among the first newscasters to use the new medium of radio and, later, television, in a broadcast career that lasted until a few years before his death in 1981.

Thomas Jr.'s daughter, Anne Donaghy, said her father grew up "with the background of a colorful and fascinating parade of guests of his parents, counts and war heroes, princes and presidents."

She also pointed out that the "Sr." and "Jr." designations of the father and son were possibly superfluous.

"My grandfather was Lowell Jackson Thomas," she told Alaska Dispatch News. "My father didn't have a middle name. But he didn't drop the Jr., even after his father died. He finally decided he didn't need it when he was 90."

Thomas served in the Army Air Corps during World War II and flying became his passion.

In 1949, he traveled to Tibet with his father and met the Dalai Lama shortly before the region was occupied by Chinese troops. The plight of the Tibetans became a lifelong cause for him. His book about the trip, "Out of This World," became a best-seller, and in 2006, he received the Light of Truth award from the International Campaign for Tibet.

He bought a Cessna 180 in 1954 and with his wife, the former Mary Taylor Pryor, better known as Tay, flew the single-engine plane to distant parts of the globe. They wrote articles for National Geographic and a book, "Our Flight to Adventure," about their aerial expeditions.

In 1958, they flew to Alaska along with Anne, a toddler at the time, and liked it so much they moved here in 1960. In the years that followed, Thomas used his flying skills for research and documentary assignments and, after acquiring a turbocharged Helio Courier, participated in mountain rescues, performing glacier landings on Mount McKinley (now Denali) and the Alaska Range.

"He never even once scratched a plane," his daughter said.

Shortly after moving to Alaska, Thomas became involved in politics and represented Anchorage in the Alaska Senate as a Republican for 12 years. In 1973, he ran for lieutenant governor in an unusual arrangement that paired him and Jay Hammond, running for governor, as a declared team in the primary election. Primary candidates had previously run individual campaigns for individual offices. The ticket was elected and Thomas held the office during Hammond's first term.

A controversy arose after Thomas made remarks some interpreted as approving of apartheid in South Africa and disparaging mixed-race marriages. In his biography "Tales of Alaska's Bush Rat Governor," Hammond called the firestorm that erupted a hypocritical smear of one of the most decent and humane men he'd ever known. But he accepted Thomas' decision not to file for re-election.

Thomas returned to flying. He owned and operated Talkeetna Air Taxi in the 1980s and did not run for political office again. In later years, he referred to himself as an independent.

He was particularly active in environmental issues and was among the local leaders who pushed for establishment of Chugach State Park. He received Lifetime Achievement awards from the National Parks and Conservation Association in 1995 and the Alaska Conservation Foundation in 2004.

He served on the boards of numerous nonprofit organizations and was primary sponsor of several efforts to improve education, recreation and life in the local and world communities. Among the permanent structures he helped create are the ski training facility on Eagle Glacier in the mountains above Girdwood, now the Thomas Training Center, the Thomas Planetarium at the Anchorage Museum, and the Thomas Center, an independent senior living facility on the campus of St. Mary's Episcopal Church.

The Thomases were longtime members of that church and Lowell, a baritone, often sang with the choir. In April, he moved into the center himself, where he died Saturday with his family around him.

Thomas was preceded in death by his wife, Tay. He is survived by his daughter, Anne, and son, David, and their children and grandchildren.

The family said his body will be cremated and that a private service will be held at St. Mary's next summer. They suggest that memorial gifts in his name be sent to the Alaska Conservation Foundation or the International Campaign for Tibet.