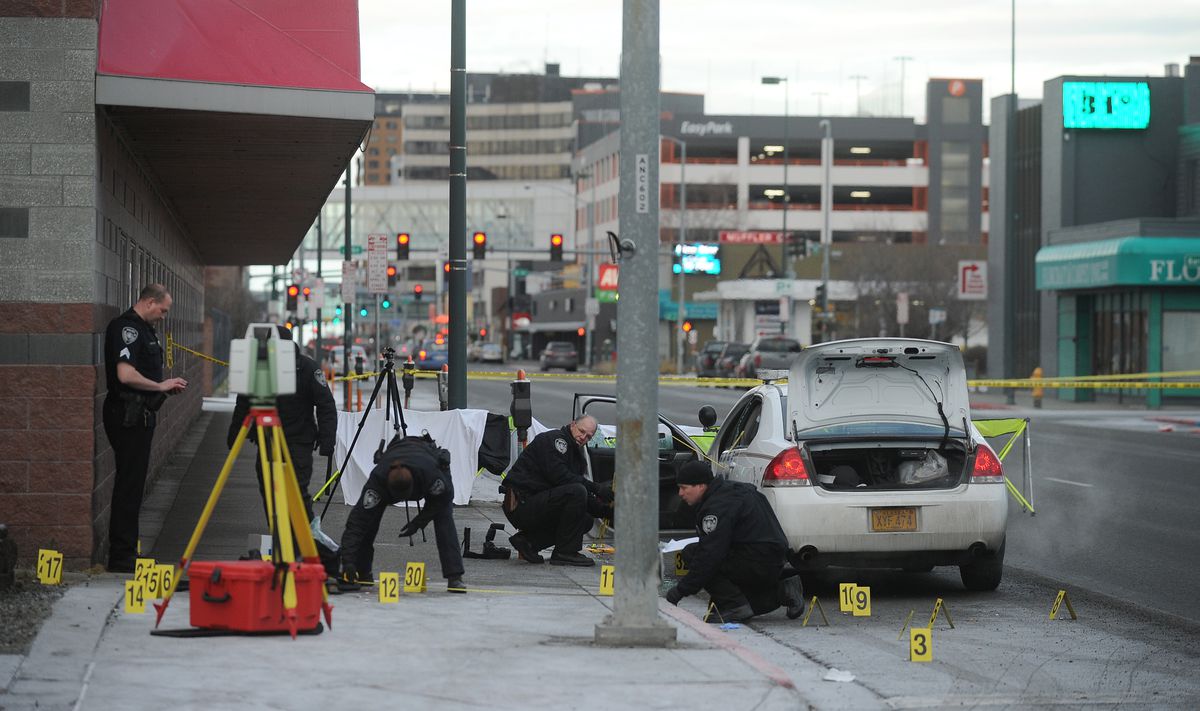 Anchorage police officers investigate the scene of an early morning shooting at Fifth Avenue and Cordova Street in Anchorage Saturday, Nov. 12, 2016. A police officer was wounded and the suspect was killed. (Bob Hallinen / Alaska Dispatch News)

Anchorage police officers investigate the scene of an early morning shooting at Fifth Avenue and Cordova Street in Anchorage Saturday, Nov. 12, 2016. A police officer was wounded and the suspect was killed. (Bob Hallinen / Alaska Dispatch News)

A police officer shot in his patrol car in downtown Anchorage early Saturday was in stable condition Sunday night.

The officer, whose name has not been released, underwent two surgeries for "multiple gunshot wounds" on Saturday, said Anchorage Police Department spokeswoman Jennifer Castro. On Sunday, he was recovering in a local hospital, she said.

The suspect in Saturday's incident was killed in gunfire from police. Police are still trying to notify his next-of-kin, and no name had been released as of Sunday night.

The incident is the second time in a month an Alaska police officer has been taken by surprise by gunshots as they were arriving at a call. It has unsettled police ranks already on edge, said Sgt. Gerard Asselin, the president of the Anchorage Police Department Employees Association.

"It's a tenuous situation for our folks who see this on a national level, who less than three weeks ago saw it in Fairbanks and now it's right here affecting our own department," Asselin said Sunday.

The attack drew parallels to the still-raw death of a Fairbanks police officer. In that incident, Sgt. Allen Brandt was shot as he responded to a report of gunfire in downtown Fairbanks Oct. 16. Brandt later died after complications from a surgery to remove bullet fragments from his eye.

Many facts about Saturday's shooting have not been publicly disclosed by police, or are still under investigation.

Here's what police have said happened.

An APD officer was on a downtown patrol in the early hours of Saturday morning when a call came in to police dispatch reporting a theft suspect around the area of Fifth Avenue and Cordova Street, a quiet stretch of a major downtown thoroughfare.

As the officer was "initiating a stop" a man with a gun "approached the patrol car and started firing at the officer," hitting him multiple times, according to police. The officer fired back. The call came in about the shooting at 4:36 a.m., police have said. Another officer arrived as the shooting was happening and also fired at the suspect, who was declared dead at the scene.

On Sunday, nothing was left on the sidewalk outside the Office Depot at Fifth Avenue and Cordova Street but a scattering of crushed glass on the sidewalk.
Police have not released the name of the suspect, or any details about his background or motive. It is also not clear whether the man who shot at the officer was the person described by the caller as the thief suspect.

At a Saturday news conference, police chief Christopher Tolley described the shooting as an "ambush." The officer was shot while he was still inside his patrol vehicle, wrote Castro in an email. Police are still investigating whether the officer was lured to the area on purpose, she said.

Anchorage police have dashcam footage of the shooting unfolding. Releasing it would have pros and cons, Castro said. Such footage can support what the department has said about an incident. But it "can show horrific events and you have to consider how your residents feel about seeing something like that as well as the family and loved ones of the people who were involved."

No determination has been made about whether the footage will be released, she said.

Anchorage police don't ride in pairs but typically arrive at calls involving weapons or the threat of violence with a second unit for backup, according to Castro.

In this case, Asselin said, there was no warning at all.

"This was a simple theft and this officer was in a battle for his life."