'There are no words': 4 more charged as vigil honors slain Palmer teen 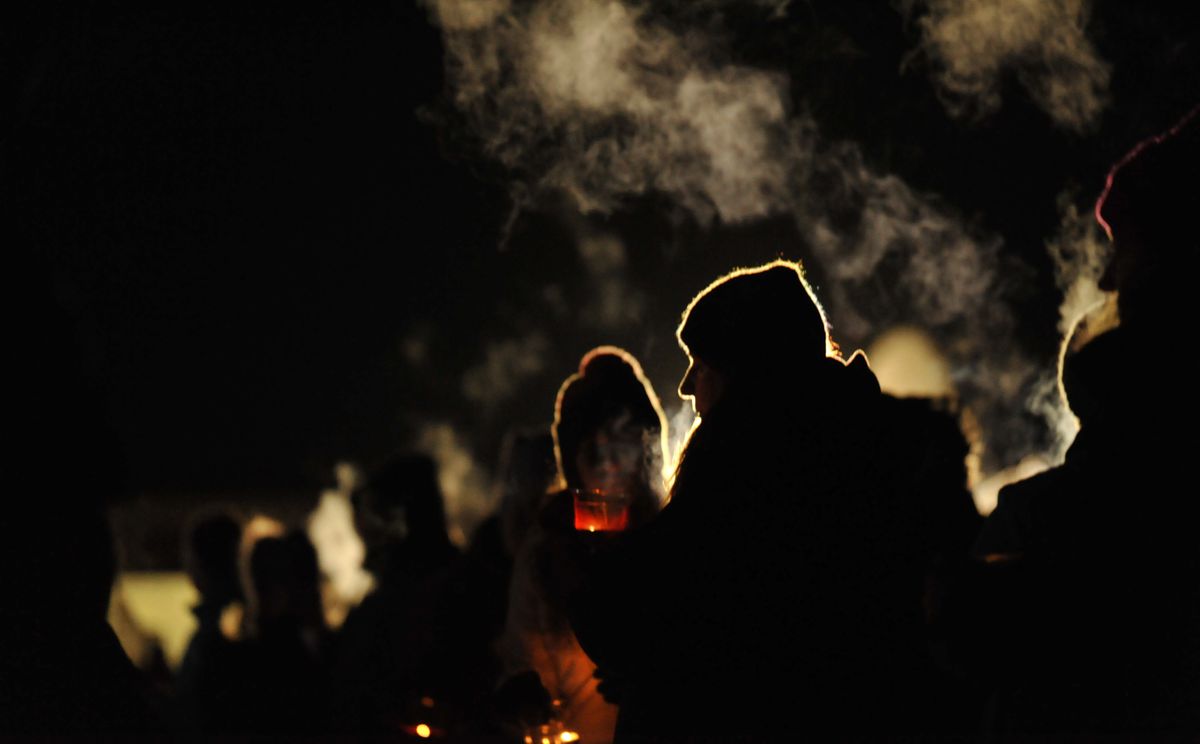 Angie Spaulding and hundreds of others attend a candlelight vigil for David Grunwald at the Borealis Theater at the Alaska State Fair grounds in Palmer on a frigid Friday. (Bob Hallinen / Alaska Dispatch News)

Angie Spaulding and hundreds of others attend a candlelight vigil for David Grunwald at the Borealis Theater at the Alaska State Fair grounds in Palmer on a frigid Friday. (Bob Hallinen / Alaska Dispatch News)

PALMER – As several hundred mourners remembered David Grunwald with a candlelight vigil Friday night, four more teenagers were charged in connection with the savage killing of the 16-year-old from Palmer.

Grunwald's disappearance after dropping off his girlfriend in Butte on Nov. 13 triggered weeks of searches from hundreds of friends and strangers. His Ford Bronco was found, burned to its frame, the next day up a rough road into the Talkeetna Mountains near Wasilla.

The death of a teen described as bright-eyed, ambitious and always ready with a joke shattered Grunwald's numerous friends and family, participants said during a tearful vigil at the Alaska State Fair grounds Friday.

"I don't know what to say. There are no words to describe what the world has lost," his aunt, Cheri Ruiz, said during an emotional homage to the nephew who snapped selfies in the goofy T-shirts she gave him.

The death also shattered a sense of security in the Valley: Grunwald came from a devout, military family. He was a clean-cut kid his parents said gave other people rides, and even helped at least one steer clear of drugs.

"This is a terrible series of events that all of us wish we could undo," said Mark Okeson, principal at Mat-Su Career and Tech High School, where Grunwald was a student on an engineering pathway with an interest in aviation.

Okeson also expressed gratitude to Alaska State Troopers, the media and the community for helping to find Grunwald and bring his killer to justice.

Until Friday, only one person had been arrested for the crime: Erick Almandinger, a 16-year-old former classmate of Grunwald's, who was charged as an adult last Saturday.

A Palmer grand jury on Friday added four more names to the list of those charged in connection with the crime.

The grand jury charged Dominic Johnson and Bradley Renfro, both 16-year-olds from Wasilla, with first- and second-degree murder and evidence tampering, according to the indictment. They were charged as adults.

Austin Barrett, a 19-year-old from Palmer, was charged with first- and second-degree murder and kidnapping.

Devin Peterson, an 18-year-old from Wasilla, was charged with three counts of evidence tampering and first-degree hindering prosecution.

All four were in custody as of Saturday morning, according to state troopers.

An affidavit filed with the charges against Almandinger provides some clues as to the involvement of the other teens.

A brutal attack on Grunwald, based on an interrogation of Almandinger, began in a camper-trailer behind Almandinger's home in Palmer.

Almandinger said he, Grunwald and a teen identified as "D.J." — apparently Johnson — drank and smoked marijuana in the camper. He said Johnson told Almandinger to go into his house and get a gun, which he used to bludgeon Grunwald.

The teens then forced Grunwald into his Ford Bronco and drove to Knik River Road, where he was shot and killed by someone Almandinger identified as either "D.J." or "A.B." — presumably Barrett — in two different versions of his story.

Then, Almandinger told troopers, the teens drove to Peterson's house in Wasilla for advice. Peterson told troopers he saw Almandinger and Johnson but "told them they were stupid and sent them away because he didn't want the trouble," the affidavit says.

Later, some of the teens tried to remove the blood in the camper with bleach, but ultimately they attempted to destroy evidence by burning a carpet, the document says.

Peterson and Renfro last week posted comments on Facebook denying their involvement in a crime.

Peterson and Barrett were arrested in June for a kidnapping that took place in Wasilla and Eagle River. It's unclear whether the two ever faced charges; Peterson's older brother, Damien, was convicted of second-degree assault on a plea deal, a state courts database shows. He's currently on probation.

Almandinger, Renfro, Johnson and Barrett "intentionally caused" Grunwald's death as principals or accomplices, according to Friday's indictment. They also restrained and kidnapped him, and destroyed evidence.

Peterson "suppressed, concealed or removed" a 9mm pistol and .40-caliber pistol involved in the crime, the indictment asserts. Peterson also was allegedly involved in burning the Bronco, according to the indictment.

Word of the charges had barely started trickling through the vigil, where people held small candles in clear cups. Some wore blankets against the 15-degree temperatures and leaned against one another.

A small group of attendees held up "Justice for David" signs at the entry to the Borealis Theater, where the vigil was held.

Renee Royal, of Wasilla, made the signs after her friend Adam Mokelke told her what happened. Mokelke's daughter, Victoria, has been Grunwald's girlfriend for the past year.

"Everybody wanted more indictments," she said.

The vigil was organized by friends and former neighbors of Ben and Edie Grunwald, David's parents, to offer them support. The Grunwalds attended and Edie spoke.

People from all parts of David Grunwald's life attended.

Azlynn Brandenburg was at Academy Charter with Grunwald in seventh grade.

"He was always smiling. He would just randomly speak Russian to us," she remembered before the ceremony started.

Katherine Covey stood in the crowd with her 3-year-old springer spaniel Archer, a cadaver dog. The pair traveled up from Covey's home on the Kenai Peninsula nearly every day to help look for Grunwald — until last Friday.

Victoria Mokelke spoke to the crowd and shared stories of her boyfriend, the guy who asked her father for permission to take her on their first date to a movie — with his mother as chaperone — and told her often how much he loved her and his friends.

"Hold on to his memory as tight as you can and never let it go. Please," Mokelke said.