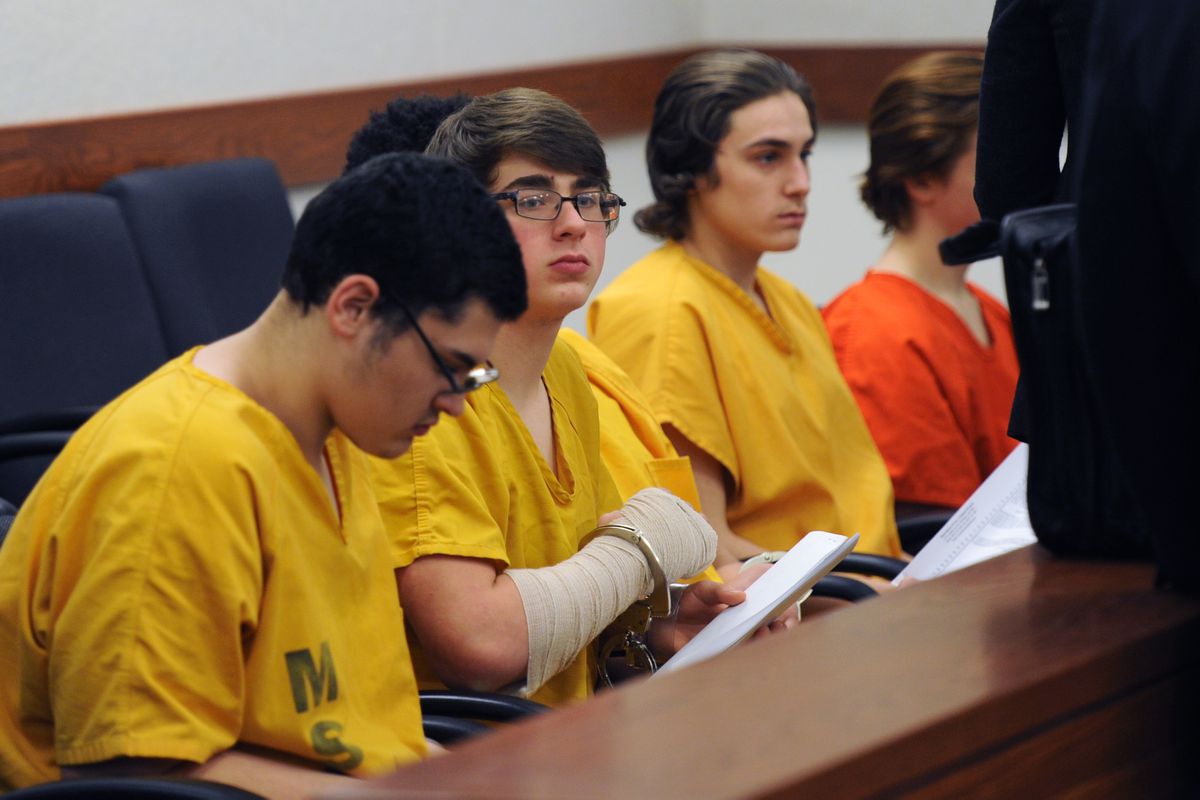 PALMER — The emotional strain of the David Grunwald murder case led to a tense encounter Tuesday as the five teenagers accused of playing a role filed out of Palmer Superior Court.

Bradley Renfro, 16, from Wasilla, appeared to address the parents of the dead 16-year-old, according to some in the courtroom. But Renfro's parents say he was talking to his own father, who sat behind the Grunwalds.

The five charged in Grunwald's murder entered not-guilty pleas during a brief hearing Tuesday morning before a packed courtroom. They walked out in handcuffs connected by a long black strap.

Renfro cocked his head back as he passed Ben and Edie Grunwald, sitting in front.

The next interaction was interpreted differently by the families involved.

Grunwald's supporters, including two private investigators involved in the search for David, say he looked directly at Edie Grunwald and another relative.

"He said, 'What are you gonna do?' " said Luke Smith, a private investigator from Eagle River sitting directly behind the Grunwalds. "And then he paused and looked at them again and said, 'Do something.'"

Renfro gestured with his hands in what appeared to be a physical challenge before he walked out, Smith said. Another Grunwald family friend sitting nearby also said she believed the comment was directed at the slain teen's parents.

"I was shaking when I left the courtroom I was so mad," Smith said.

Russell Renfro, however, said his son was talking to him: "He said, 'What you gonna do, dad?'"

Renfro's mother, Brittney Smith, said it may have looked like her son was cocking his head but he was only trying to get his hair out of his face. His right arm is in a cast and he held paperwork in the other, so his hand gestures were awkward, Smith said.

"He has no disrespect for the Grunwalds, I swear to God," she said, saying the family wants to avoid any more tension. "I want justice for David as well. I'm just sorry for everybody involved. But he definitely did not say that to them."

Investigators say the 16-year-old from Palmer was killed on the night of Nov. 13, but his body wasn't found until Dec. 2 after investigators pieced together the case. Hundreds of people searched for the missing teen in the interim as his parents and friends could only wait for answers.

The first arrest was 16-year-old Erick Almandinger on Dec. 3.

According to charging documents in the case, Almandinger described a chilling scenario where Grunwald came to a trailer next to Almandinger's Palmer home to drink and smoke marijuana. He was then brutally pistol-whipped before being loaded into his own Ford Bronco and driven to the Knik River, where he was shot and killed. The teens torched the Bronco and left it on a rough road at the base of the Talkeetna Mountains, where it was found the next day, according to the charges.

The only motive Almandinger provided was Grunwald "had smoked all his weed," according to an Alaska State Troopers affidavit filed with charging documents.

['There are no words': 4 more charged as vigil honors slain Palmer teen]

Peterson was charged with three counts of evidence tampering and first-degree hindering prosecution.

Everyone but Peterson was jailed without bail. Peterson's bail was set at $100,000 and the requirement of a third-party custodian.

Almandinger wore orange jail scrubs during Monday's hearing, which can indicate an inmate separated from the general population. The others wore yellow.

Generally, Allen-Young said, juvenile inmates waived into court as adults can request protective custody, but not all underage inmates are separated from the general population.

A inmate-tracking website put Almandinger at Cook Inlet Pretrial, but Allen-Young said all five were jailed at Mat-Su Pretrial Facility.

Grunwald, a student at Mat-Su Career and Tech High School near Wasilla, was described by friends and family as a clean-cut kid with a bright future studying engineering and aviation. It's not clear how well he knew the five teenagers accused of involvement in his slaying.

Almandinger's family in an interview Monday said they knew Grunwald as a polite, occasional visitor to their Palmer house.

"Whenever he was here it was, 'Yes sir, no sir,' " Almandinger's father, Rod Almandinger, said during the interview.

Ben and Edie Grunwald sat, stricken, throughout the proceedings.

Ben Grunwald at first looked at the five teens accused of killing his son then dropped his head to take notes, his hands shaking.

The courtroom was packed but silent and tense.

Several families of the teens charged in the murder sat in the gallery, flanked by people supporting the Grunwalds.

Peterson's parents, Alanah and Clive, sat in one row with a half-dozen other supporters. Peterson and his older brother were arrested with Barrett in connection with a bizarre kidnapping and assault in Eagle River and Wasilla in June, though only Peterson's brother was charged in that case, and received an 18-month felony probation sentence.

Devin Peterson was home in Wasilla when the Grunwald murder occurred but is accused of covering up the crime, his mother said.

"I just thank God he wasn't there," she said. "He covered for his friends like a dumbass. It's all crazy. They're all wrong."

Peterson said she felt terrible for the Grunwalds.

"We're all going through stuff, but at the end of the day, our kids are still alive," she said.