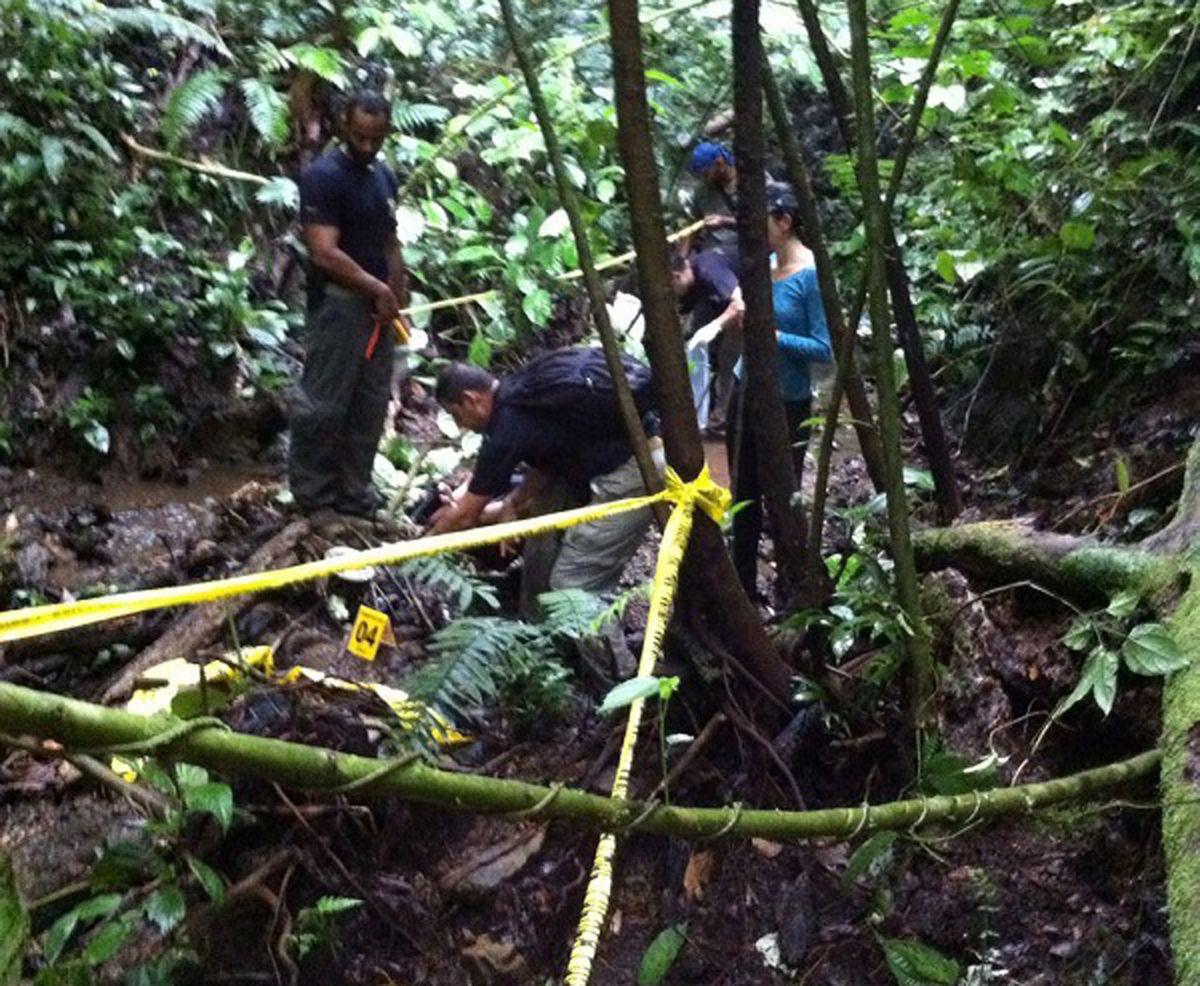 A team investigates the site where human remains were found in Corcovado National Park on May 22. The remains were later determined to be those of Alaskan Cody Roman Dial. (Courtesy Judicial Investigation Organization)

A team investigates the site where human remains were found in Corcovado National Park on May 22. The remains were later determined to be those of Alaskan Cody Roman Dial. (Courtesy Judicial Investigation Organization)

The remains of Cody Roman Dial, an Alaska adventurer who went missing in 2014, were positively identified after being found in Costa Rica this summer, according to his father.

In an obituary published Sunday, the Dials wrote that Cody Roman, 27, was killed when a tree fell on his camp. Foul play had previously been suspected in his disappearance.

Roman Dial said in a phone interview Monday that DNA evidence and dental records showed the remains found in Corcovado National Park were those of his son. Also, items found near the body belonged to Cody Roman. The family received DNA test results in November.

His remains were found in May by a local miner in a ravine located in the central part of the Southwest Costa Rica park. Cody Roman was last heard from in July 2014 when he emailed his father a rough itinerary of his trip.

Roman Dial said his son's passport and money were found among the remains, helping to rule out robbery. Forensic analysis of his bones showed no sign of machete or bullet wounds.

Trees fall in the area often, he said. When he was there, one almost fell on a nearby camp in the dense jungle of the park.

"I know it sounds kind of far-fetched and kind of weird but it happens a lot there and is dangerous," he said.

Roman Dial, who was in Costa Rica when his son's remains were found, said a stove belonging to Cody Roman was found at the site heavily damaged. He said the steel fuel canister was bent and the burner connecting to it had snapped off in "such a way that it only would have broken off with tremendous force."

Roman Dial, along with others, had traveled to Costa Rica multiple times to search for his son but no evidence was found. That led him to assume the worst.

"I'd come to the conclusion that foul play was involved just because I couldn't find him," he said.

A six-episode National Geographic Channel show, "Missing Dial," documented the family's search for their son and concentrated on the theory that Cody Roman was murdered.

Roman Dial said the show left what happened to his son as inconclusive. He said it focused more on dramatizing events than being an actual documentary.

Still, Roman Dial thinks the show brought more attention to his missing son and may have led to the recovery of his remains. Trailers had begun airing for the show shortly before Cody Roman's remains were found. Roman Dial thinks that illegal miners and tour guides in the area wanted to see the case solved.

"(The show) was sort of a necessary evil. Did it help? I think it helped a lot. Did we pay a price for that help? Yeah, we did," he said. "Would I do it again knowing what we know? Yeah, I would because I feel like it helped."

Roman Dial said his son's remains were cremated and returned to Alaska. A memorial service for family and friends is scheduled for Wednesday.