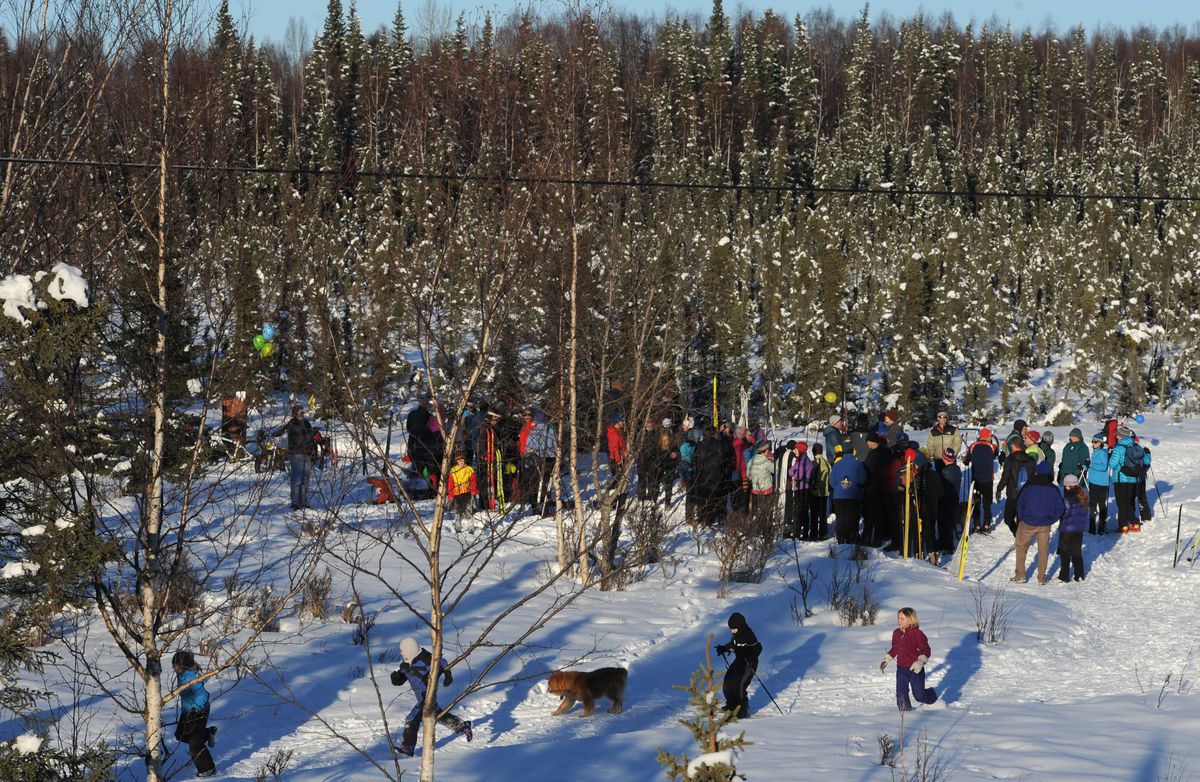 About 50 people gathered in the snow for the Big Wild U-Med peaceful protest party on Feb. 23, 2014, in the green space affectionately known as “the swamp” where the proposed U-Med road would be constructed. (Bill Roth / Anchorage Daily News)

About 50 people gathered in the snow for the Big Wild U-Med peaceful protest party on Feb. 23, 2014, in the green space affectionately known as “the swamp” where the proposed U-Med road would be constructed. (Bill Roth / Anchorage Daily News)

Alaska state senators on Monday drove a final stake through the heart of the long-sought U-Med road — taking $17 million set aside for the project and redirecting it to public schools.

The move, officially made at an afternoon hearing of the Senate Finance Committee, would effectively kill the Anchorage construction project, since a parallel budget proposal in the House also stripped out the cash.

School funding "is the No. 1 priority and a constitutional mandate for the state," said Eagle River Republican Sen. Anna MacKinnon, a finance committee co-chair and one of the members in the Senate's Republican-led majority.

Anchorage Mayor Ethan Berkowitz has opposed continuing work on the road project and the House majority doesn't support it either, MacKinnon added.

Berkowitz told state officials in December 2015 that he planned to halt the contentious project that would have punched a north-south road through the city's University-Medical district, connecting Elmore Road to south Bragaw Street.

The Alaska Legislature allocated $20 million for the road project in 2013, and the city transferred the money to the state Department of Transportation to handle development.

Design plans moved forward and about $17 million remained in the budget by the time Berkowitz called off the project.

Berkowitz said at the time that he wanted the Legislature to reallocate the money toward the city's effort to modernize the Port of Anchorage, which officials said was in dire need of repairs.

But state lawmakers never did that. They did vote in the 2016 session to give the money to the University of Alaska to complete the road project, but Walker vetoed the transfer, leaving the funds with the municipality.

Legislative Finance Director David Teal said in an interview Monday that legislators can reappropriate money if it has not been spent.

"In this case, apparently, the city has not wanted to construct that road," he said. "Some legislators are for it and some are against it but apparently enough are saying, 'Well, if the city isn't going to build it, let's take the money back.' "

Berkowitz said in an interview Monday that he's "always very supportive of education" but he had hoped that when Anchorage legislators moved money already appropriated for the municipality, they would have sent it to other city projects.

"Education is absolutely critical and the Legislature as a whole has a responsibility to support education across the state, I recognize that, but the dollars they're talking about reappropriating here are dollars that were initially appropriated for Anchorage-specific projects," he said.

"The responsible thing for them to do is to reappropriate it in ways that support the most pressing needs that Anchorage faces."

Berkowitz said in a 2015 letter to the state transportation commissioner that too much uncertainty surrounded the U-Med road project for him to support it, plus a majority of neighboring community councils opposed the proposed road.

Carolyn Ramsey is one of the Anchorage residents who ardently opposes the road project. In an interview Monday, she said the removal of funding for the road further solidified the end of the project. But until Gov. Bill Walker signs the budget, "nothing is 100 percent," she said.

"We're a lot closer than we were," she said. "I would like to say, 'Thank you very much' to the Alaska Legislature for taking the steps to remove the funding from not a good project and put it toward education, which will definitely move the state forward."

Jill Reese, a spokeswoman for the state transportation department, said in an email Monday that work on the U-Med road project had stopped and the department had terminated the contract with the consulting firm. Staff had archived the long-standing project.

Those that have come out in support of the road project include the neighboring Alaska Pacific University, the Alaska Native Tribal Health Consortium, Providence Alaska Medical Center and the University of Alaska.

UA President Jim Johnsen said in a statement Monday that the U-Med district was home to several of the state's largest employers and was "one of the bright spots of Alaska's economy."

"Unfortunately, the surrounding transportation infrastructure hasn't kept up with the area's growth and is now impacting the safety, vitality and economic potential of the area," he said.

Johnsen said Monday's decision to take away the money for the road "effectively ends state funding for this critical transportation project and makes it unlikely the project will progress in the near term."

Providence, APU and the tribal health consortium declined to comment for this story.