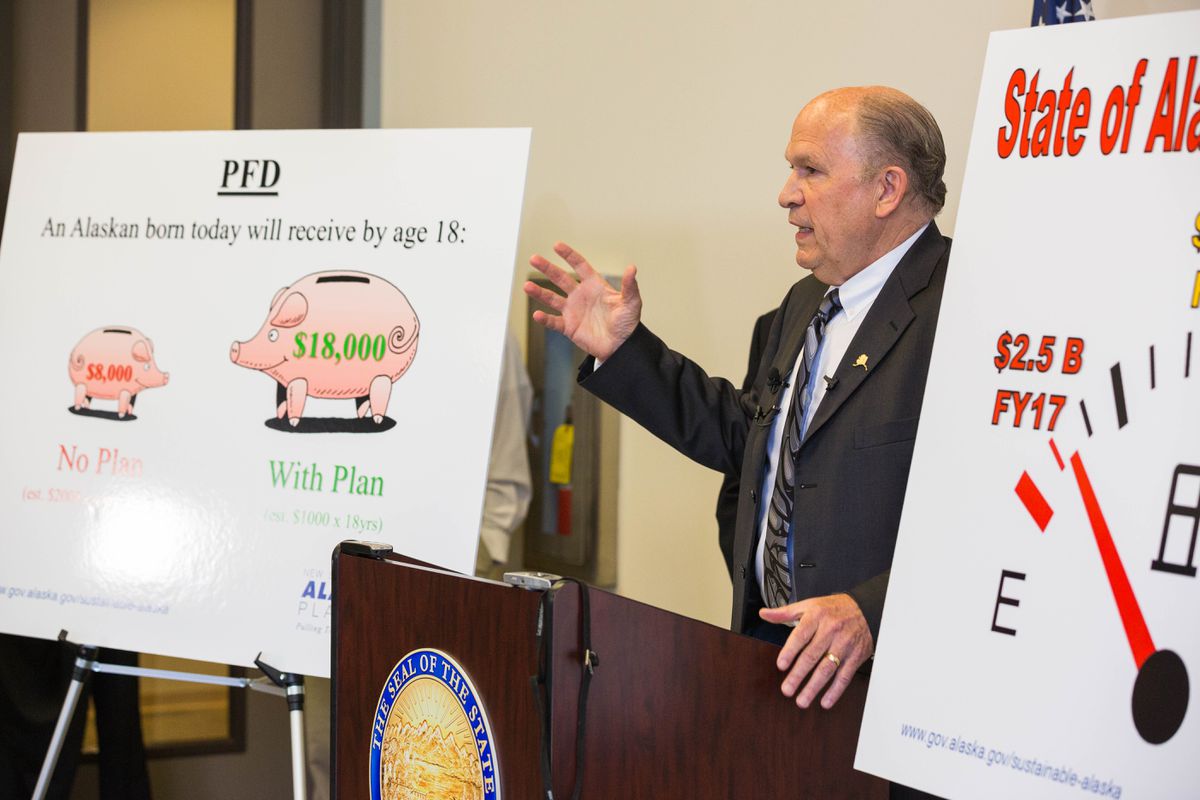 Alaska Gov. Bill Walker announces that he is using his veto power to cap the Alaska Permanent Fund Dividend at $1,000 this year, during a press conference on Wednesday. (Loren Holmes / Alaska Dispatch News)

Alaska Gov. Bill Walker announces that he is using his veto power to cap the Alaska Permanent Fund Dividend at $1,000 this year, during a press conference on Wednesday. (Loren Holmes / Alaska Dispatch News)

Saying the Alaska Legislature failed to do enough to solve the state's deep financial woes, Gov. Bill Walker used his veto pen Wednesday to slash next year's state spending, including likely cuts in Permanent Fund dividends, a delay in paying tax breaks for the oil industry and cuts in education programs and road projects.

At a news conference in Anchorage called to announce and explain the vetoes, Walker said the state is facing a $4 billion hole in budget revenues due to low oil prices and dwindling oil production. He said the state can no longer afford high annual dividends from the $52 billion Alaska Permanent Fund, like the $2,072 payout in 2015 to every adult and child resident.

The state's fiscal position is dire, he said. "We've lost 80 percent of our income in about a year and a half," he said.

His Alaska Permanent Fund veto allows for a $1,000 annual dividend this year, Walker said. High dividends are not sustainable, he added, and reductions in the payout are needed to keep the fund alive.

"If we don't make a change on the dividend program, here's what happens. It goes away in under four years," he said.

Walker's other vetoes, totaling $1.29 billion, slashed government funding in a number of agencies, including education, as well as pausing highway projects and stopping megaprojects like the Knik Arm bridge and Susitna River dam. He vetoed funding for the controversial U-Med highway project in Anchorage.

Those cuts were painful, the governor said.

"This is not a day of celebration. This is sort of a day of reckoning," he said.

But some constituents were happy about the Susitna cuts. Mike Wood, board chairman for the anti-dam Susitna River Coalition, said, "We're ecstatic that he made that announcement today among some pretty grim news."

Among the most high-profile vetoes was funding for paying oil-tax credits he said was at odds with the state's need to generate money from its leading industry. The tax credits were fiercely defended by the oil industry and its supporters in the Legislature, but critics said they allowed industry to not pay its fair share of state government.

That veto defers $430 million in credits the state would have paid to the oil companies, Walker said. "We can't afford that, where we are today," he said. We just didn't have the cash flow to be able to fund those."

"This veto is shortsighted because the state is obligated to make good on its commitments. A misguided move like this sends a chill throughout the investment community, as well as an industry already battered at low oil prices," Moriarity said in a statement.

"Today's veto tells investors Alaska is closed for business and will go back on its own policy whenever the price of oil fluctuates. For investors looking to make billion-dollar decisions, this makes an already risky investment that much riskier," she said.

Walker's vetoes were announced a week before the Legislature begins a second special session. It already has been in overtime twice — extending its regular session 31 days beyond what the law allowed, then running out the clock on the first special session without taking House and Senate votes on major fiscal bills. The next special session, called by Walker to being July 11 in Juneau, has another agenda of fiscal bills. Walker said he hoped Alaskans would pressure the Legislature to get more done.

The Alaska Constitution allows the Legislature to consider overriding vetoes in a special session called by the governor, and House Speaker Mike Chenault said lawmakers might just try. He said he'll meet with members of the majority to see if there's enough support to overturn vetoes, a step that requires a three-quarters vote of the Legislature.

Chenault is a Republican from Nikiski, a district loaded with oil industry workers and support companies, including one he owns himself. He said overriding the oil-tax credit veto would be a priority.

"It'll make more of the independents in my district start to flounder," he said.

"A lot of people expected they'd get $2,000 this fall, and I think people are going to be pretty upset by this because they won't get that," Wielechowski said. The dividend cut and many of the other vetoes will hurt low-income Alaskans disproportionately, he said.

"These are cuts that will be felt very strongly by working people, lower income people, because you have significant cuts in education, the university and, of course, the Permanent Fund cut," Wielechowski said. "People on the lower income scale will fill that harder than people on the higher end. The average Alaskan earns $50,000 a year. You're talking a large reduction for a family of four."

Sen. Peter Micciche, R-Soldotna, said he admired Walker's "courage" in cutting PFDs, something the Alaska Senate had already done in Senate Bill 128 but which the House left on the table when it adjourned.

"We'll see if that gives any cover for the other body (the House) to come to the table and realize, election year or not, there's a job to be done," Micciche said.

Walker, business and citizens groups, bond rating agencies and others have been goading lawmakers to do something about Alaska's out-of-whack budgets since the price of oil collapsed two years ago amid flagging oil production.

Production on the North Slope, where major oil fields are aging, has depleted to about 530,000 barrels a day from the peak of 2 million barrels in 1988.

Since oil began flowing through the trans-Alaska pipeline in 1977, the state has relied on oil royalties, taxes and fees for most of its revenues. That system has left the budget subject to price volatility and production declines.

Walker proposed a series of measure to fix the $4 billion "budget gap," including a major restructuring of the Permanent Fund, an income tax, and new or increased taxes on many of the state's industries.

He also proposed phasing out most of the tax credits for oil producers and explorers, and suggested oil taxes be increased. The 2017 budget he proposed this year was lower than the budgets approved and signed during more prosperous years for the state treasury.

But with legislators fearing the wrath of voters or having their own philosophical problems with touching the Permanent Fund and instituting new taxes, they chose instead to take money from one of the state's dwindling savings accounts, the Constitutional Budget Reserve.

Rep. Bob Herron, D-Bethel, who caucuses with the House Republican majority, said Wednesday he's disappointed in the Permanent Fund reduction, which will hurt families in his district, one of the poorest in the state. Many of those families use their dividend checks for basic needs such as food and fuel.

"This is going to be a significant reduction," he said.

As he spoke in the lobby of the Anchorage Legislative Information Office, where committees were meeting, a man approached with a young boy.

"What are you doing about the governor taking my kid's money?" the man wanted to know, pointing to the boy. "In my district, you are taking money out of my kid's pockets, in your district that's for food and fuel."

"Then do something about it!" he said, then left.

Here are some of the details on Walker's vetoes:

Permanent Fund: Walker's veto cut $666.35 million from the allocation to dividends, nearly half of what the Legislature had approved in what is normally a routine transfer of earnings revenue. Walker argued, as he has in the past, for a restructuring of the fund to lower annual payouts and stretch the fund's life.

But Walker also cautioned against reliance on savings to supply the money for the budget — "eating the seed corn for another meal rather than planting the seed corn," he said, or, in a more Alaska-focused analogy: "I'm a big fan of sourdough pancakes. And if we treat our Permanent Fund like we treat sourdough starter, we'll be fine. No one would ever use up all the sourdough starter. The first thing you do is you take it out and leave it for the next batch."

Capital projects: The vetoes result in "closing down" two controversial megaprojects — the Knik Arm Crossing, a bridge project critics have likened to a money-wasting "bridge to nowhere," and the Susitna-Watana Hydroelectric Project, which critics argue would damage the environment and wreck salmon habitat.

"Those projects we can no longer continue to advance in our fiscal situation we're in today," Walker said in his news conference.

The vetoes also paused eight highway-construction projects that would have been funded from the state budget and, in part, by bonds. Those vetoes save $250 million, Walker said. "We're pausing those until we have a fiscal plan," he said.

Education: The vetoes, on top of cuts already made by the Legislature, result in a 37 percent reduction in funding for the state Department of Education, Walker said. In all, the vetoes cut $58.3 million from primary and secondary education, including a $30.5 million reduction in the state's customary school-debt reimbursement, leaving $91.5 million in funding for fiscal year 2017. They also include a $10.4 million cut in funding for construction of rural schools.

Separately, Walker vetoed $10 million in state funding for the University of Alaska and axed the planned $80 million deposit into the Higher Education Fund, a program that provides needs-based financial assistance to post-secondary students.  Scholarships from the fund will continue, Walker said.

Fish and Game: Walker mentioned one source of new funding for state operations — $9.1 million to be generated by fee increases for hunters and fishermen. The user groups actually "demanded" to pay more to support wildlife services, demonstrating admirable civic responsibility, Walker said. "They came to us and demanded that their fees be raised. They didn't come to us and say, 'Raise everybody else's, don't touch us,'" he said.

Though there were no Fish and Game vetoes announced Wednesday, the department's general-fund budget has been reduced by about 30 percent since fiscal 2015, said Carol Petraborg, a department official.

Miscellaneous: The vetoes totaled $38.55 million in cuts for government agencies, with cuts spread across the spectrum of services.

Some programs lost substantial amounts of funding. For state tourism marketing, Walker's veto cut over $3 million, leaving $1.5 million. Under his vetoes, Department of Transportation maintenance stations in Central and Chitina will be closed, saving $912,000.

Related: With a threat of PFD cuts, governor calls Legislature back for another special session