A former Eagle River student posted a photo of a gun on Twitter. That got him barred from prom. 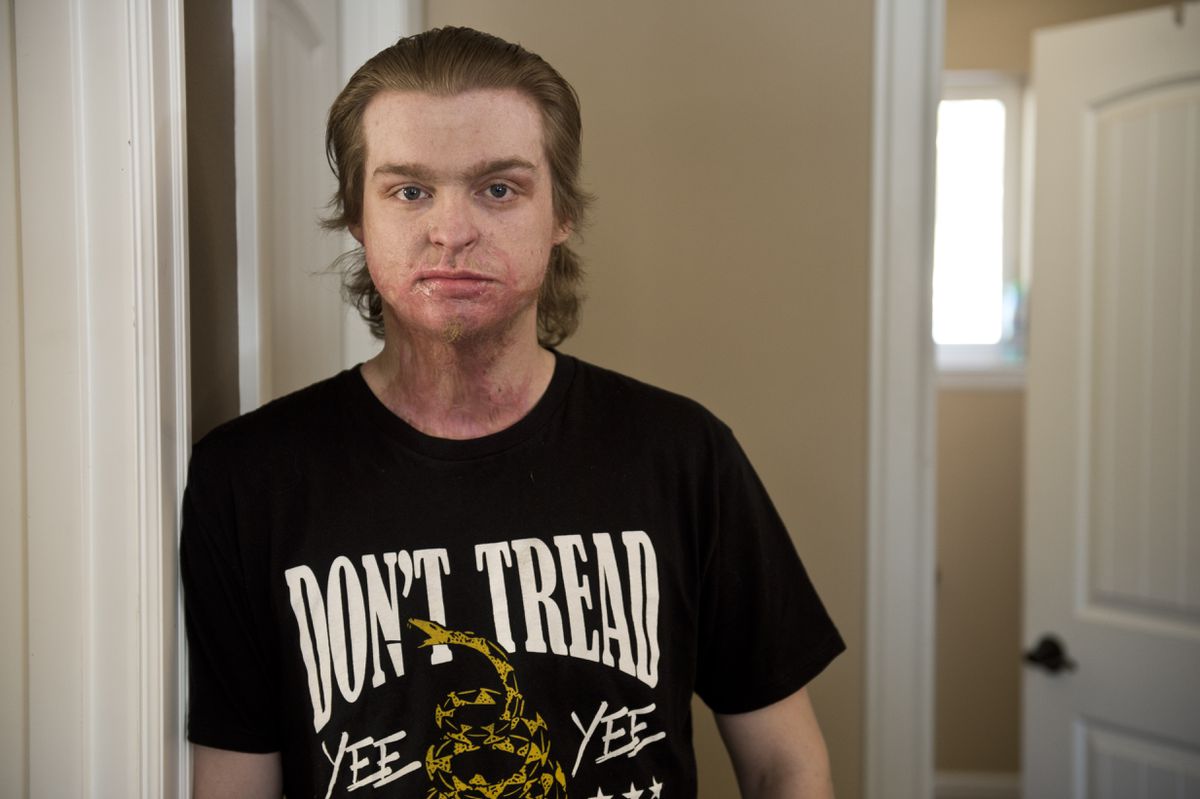 Kolton Hala of Chugiak said he was told by a school resource officer that he wouldn’t be allowed to attend Eagle River High School’s prom with a friend. Photographed on April 2, 2018. (Marc Lester / Anchorage Daily News)

Kolton Hala of Chugiak said he was told by a school resource officer that he wouldn’t be allowed to attend Eagle River High School’s prom with a friend. Photographed on April 2, 2018. (Marc Lester / Anchorage Daily News)

An 18-year-old Alaskan said Eagle River High School administrators have barred him from the school's upcoming prom after people complained about his social media posts, which included a picture of a firearm and then, about 10 hours later, one about the dance.

"It's a gun that I like, that's all it is," Kolton Hala said in an interview Monday about the photo he posted of a Hi-Point Model 4595, a .45 ACP semi-automatic rifle. "It wasn't directed toward anybody. I was just sharing what I like."

Hala dropped out of Eagle River High School last year following an accident that left him with third-degree burns to his face and upper body. He planned to go to the school's prom on Saturday as a friend's date, he said. This would have been his senior year.

Hala said he believes Eagle River High administrators denied him due process and stomped on his First Amendment right when they said he couldn't attend the dance.

However, the Anchorage School District deputy superintendent, Mark Stock, said no one has a right to a guest pass to prom. It's something that's issued, Stock said, not taken away.

School administrators have broad control over extracurricular activities and have to make judgment calls, he said. In this case, he said, school administrators were getting phone calls from parents who said they had concerns about Hala's social media posts. They said they wouldn't let their children go to the dance if Hala went.

"The main priority of the principal is to keep the dance drama-free and fun," Stock said. "It's a junior/senior prom for the current students who are enrolled at Eagle River."

It also comes at a time when the Anchorage School District is reviewing its safety procedures — a step it took after a gunman opened fire at a Parkland, Florida, high school on Feb. 14, killing 17 students and school employees in one of the worst school shootings in American history.

The Anchorage School Board had a two-hour meeting about the review's finding late Monday afternoon at a work session.

Then at its Monday evening meeting, Hala sat in the audience in an American-flag themed vest and bowtie. During public testimony, he told the Board members that he speculated people assumed he would bring the gun to prom based on his social media posts and that's unfair.

"I assume they probably thought I was going to be a school shooter, which is messed up in my opinion," Hala said.

On Twitter, Hala goes by the name "The Burning Patriot." His most recent posts are often about guns, protecting the Second Amendment and politics. He criticized March for Our Lives protests, where demonstrators called for tougher gun control laws and action against gun violence, as well as student-led walkouts in protest against gun violence.

Also, on March 6, he posted the photograph of the semi-automatic rifle with the text: "2nd amendment part 2. YeeYee"

Then, about 10 hours later, he posted: "I'll be at ERHS's prom. Try not to get offended, okay?" shortly followed by: "I will also be setting up a complaint box be on the look out [sic] for a blue box," punctuated with the symbol for recycling.

At that point, Hala said, he had already bought the American-flag-themed tuxedo for the event. He said he assumed some students would get offended and that's what his posts were about. He never meant them as threats, he said. He never intended to harm anyone.

"I've been to two proms in the past, so what's different this time?" he said.

Stock said denying a guest pass for prom is not new. It happens at every school every year.

The district did not immediately respond to questions about the number of guest passes requested for the Eagle River High prom this year and the number of those denied.

Eagle River High Principal Marty Lang said he did not want to get into the specifics of Hala's case. But broadly, he said, the school wants its students to have a good time at a safe prom and aims to limit disruptions.

He said he received emails from multiple parents who were concerned about prom after seeing Hala's social media posts. Worried students also came forward to staff, he said.

Plus, Stock said, no one has the right to go to prom and schools are under no obligation to issue guest passes to the dance. Students and parents were concerned about a teenager coming to prom, so the school didn't let him come. It seemed like a simple decision at the time, Stock said.

"Now it's been kind of co-opted to become a bigger issue about Second Amendment, First Amendment, student rights, etc. when in fact all the administrators were trying to do was keep the dance drama-free and let the kids have a good time," he said.

Hala said he has not gotten in trouble at school before, except for detention in middle school for throwing a binder like a football and breaking a light. He said he believes the school should have had a deeper conversation with him before saying he couldn't go to prom.

He said he talked to the school resource officer for about 30 minutes Thursday, but it was clear the decision was already made.

Stock said that, in hindsight, the school district could have spent more time really talking through things with Hala. However, he said, he believes the school handled the situation appropriately.

"They make these kind of judgment calls every day, all day long," he said.