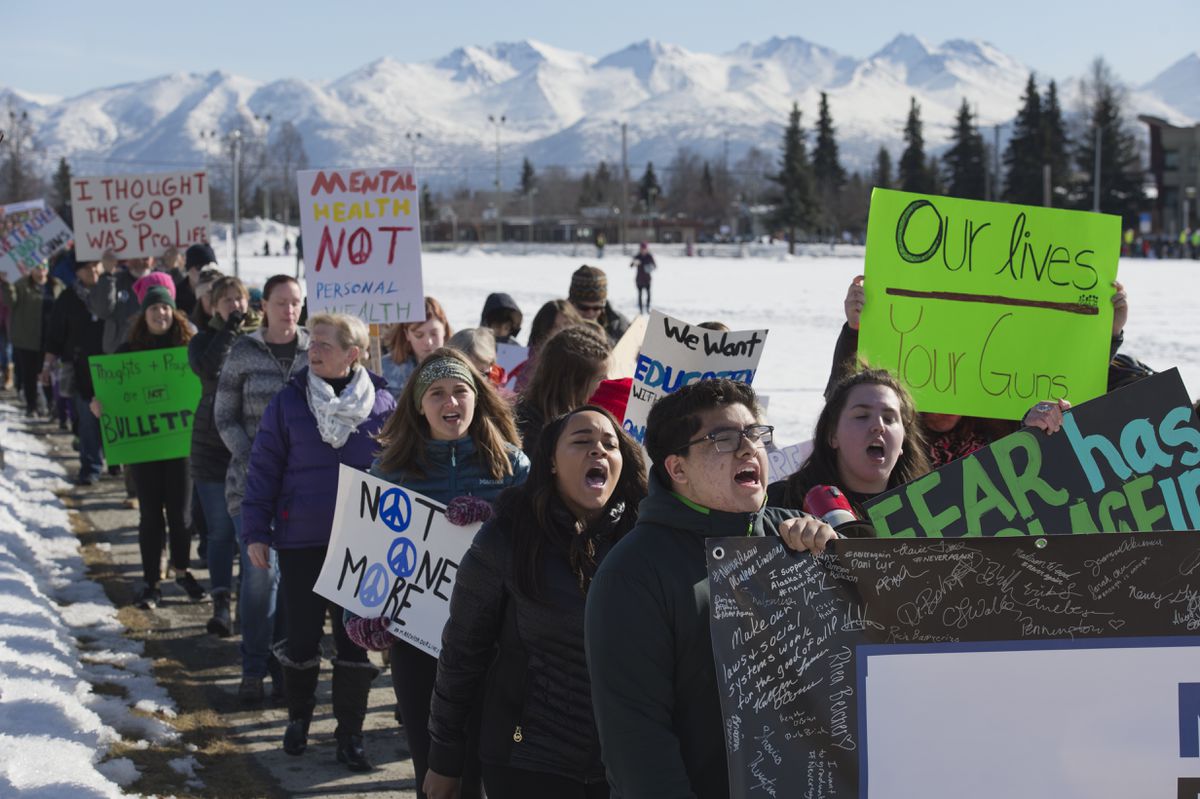 Students lead a long line of marchers around the Delaney Park Strip. A crowd of demonstrators turned out in downtown Anchorage on Saturday for a rally and march for stronger gun control laws, part of the national March for Our Lives protests, on March 24, 2018. (Marc Lester / ADN)

Students lead a long line of marchers around the Delaney Park Strip. A crowd of demonstrators turned out in downtown Anchorage on Saturday for a rally and march for stronger gun control laws, part of the national March for Our Lives protests, on March 24, 2018. (Marc Lester / ADN)

Hundreds of people gathered in downtown Anchorage on Saturday to call for tougher gun control laws and action against gun violence as a part of the national movement galvanized by a mass shooting at a Florida high school in February.

Demonstrators of all ages in Anchorage clustered at the west end of the snowy Delaney Park Strip in sunny, 30-degree weather to hear speeches and rallying cries from students leading the protest and calling for gun reform. People then walked the strip's perimeter, holding signs that said things like, "ENOUGH," "NEVER AGAIN," and "NO FEAR IN SCHOOL."

These protests — called March for Our Lives — happened all over the country on Saturday. The demonstrations follow the shooting that left 17 people dead at Marjory Stoneman Douglas High School in Parkland, Florida. Those killings have become a flash point in the national conversation about gun control and mass shootings, especially in schools, as students there have loudly demanded change and inspired those elsewhere.

"After Sandy Hook, we expected something to happen, nothing happened. After the nightclub shooting, we expected something to happen, nothing happened. We're just sick and tired," said 18-year-old Dieuleveut Biringanine, a senior at Service High School in Anchorage and one of the march organizers, referring to the mass killing that left 26 dead at Sandy Hook Elementary School in 2012 and the one that left 49 dead at Pulse nightclub in Florida in 2016.

Jenn Hoadley, one of the adults who helped organize the event in Anchorage, said there were an estimated 1,500 people in attendance. Students played music — songs like the Black Eyed Peas' "Where is the Love" and John Lennon's "Imagine" — and used megaphones to rally the crowd with chants.

[Photos: Demonstrators rally in Anchorage as part of national March for Our Lives protests]

Anchorage School District superintendent Deena Bishop was emotional to the point of tears as students were getting ready to start their speeches.

"It's been, what, 20 years since Columbine? I think as an educational leader, I'm just as responsible for what happens in Parkland as the people in Parkland," she said. "Are we doing enough to keep schools safe? I'm amazed at our kids."

I stand today with our students for safe schools, safe neighborhoods, and for our entire community. I am emotionally impacted by the voice of our youth. I believe in them. #marchforourlives pic.twitter.com/AUDDr6Y7AJ

One of the students who delivered a speech, 16-year-old West Anchorage High School junior Elsa Hoppenworth, said she and her classmates are tired of feeling helpless.

"Do you know how it feels to have the principal pretend over the intercom that the shooter is walking your way?" she asked the crowd, referring to an active shooter drill at school. "Too many people have been affected by this. Eventually, they'll all become voters."

The Florida school shooting has also brought more criticism against the National Rifle Association. Some companies have cut ties with the NRA since the killings. Others, including Fred Meyer, have announced plans to stop selling guns, or stop selling them to people under 21.

"I'm supporting a more balanced look at the Second Amendment. I don't think any right is paramount," said Kurt Johnson, who was at the march on Saturday. "I think people are getting tired of being pawns in a political game."

Ben Walker, the 2018 Alaska Teacher of the Year, spoke in front of the group and urged young people to use their voices. He recited a verse from Bob Dylan's "The Times They are a-Changin'," to huge cheers.

Students at the Anchorage march said they were inspired to come out to the demonstration by the teenagers in Parkland. They also said the video footage those Florida students took inside their school during the shooting helped launch the movement.

"When we don't see them, we forget about them. It gets to the point where we need to see these horrific things to know they are happening," said 17-year-old Ciana Dragano, a student at East Anchorage High School. "Everybody talks about it after tragedy but (students in Parkland) are really using their position to be heard."

The protests follow walkouts at schools around the country earlier this month, also calling for an end to gun violence.

Since the Sandy Hook shooting in 2012, more than 400 people have been shot in over 200 school shootings, according to The New York Times, and 138 of those people were killed.