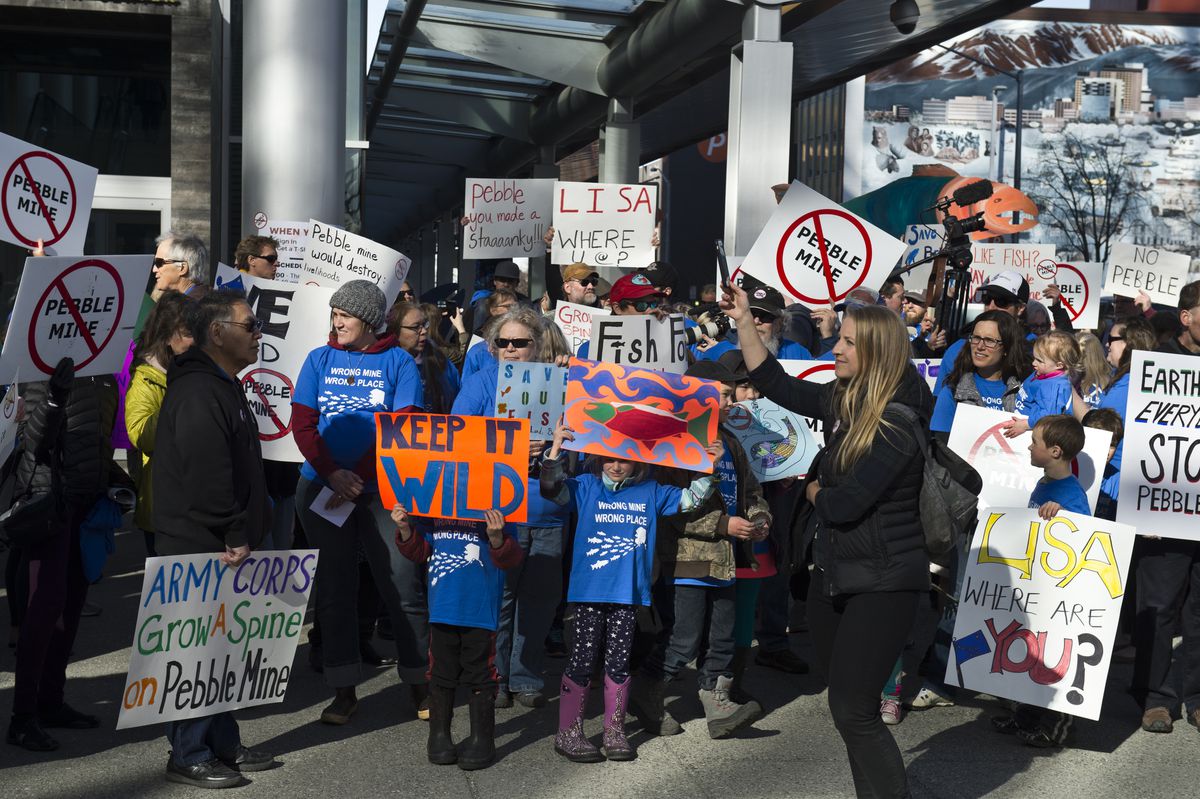 A crowd of 200 people or more rallied outside a convention center in Anchorage Thursday to protest the Pebble copper and gold prospect and what some said was an attempt by federal regulators to silence them.

The demonstration was held outside the Dena'ina Center. Inside, the U.S. Army Corps of Engineers took public input on what areas to consider in its environmental review of the project, such as air quality, salmon habitat or noise levels.

A Corps official said the agency's goal was taking as much input as possible, not silencing critics of the proposal.

The gathering was the biggest protest against the project since developer Pebble Limited Partnership filed a plan with the Corps in December in hope of one day receiving permission to build the mine.

"Wrong mine! Wrong place," the throng shouted between speakers, echoing the words on many of the blue T-shirts handed out by Save Bristol Bay, a consortium of groups opposed to the mine.

The Corps' meeting was the last in a series of meetings held in several Alaska communities in recent days, including in rural villages and in Dillingham, the hub city in the Southwest Alaska region where the project would straddle headwaters of the Bristol Bay salmon fishery.

"Salmon and the water are our foundation and connection to all life," said speaker Danielle Stickman, whose family hails from a village in the region and catches salmon for subsistence food.

Conservation and other groups who have long fought the prospect complained Thursday that the U.S. Army Corps had not allowed a typical public speaking format at the larger meetings in Dillingham or Anchorage.

Instead comments there were limited largely to written testimony. Several computers inside the convention center allowed people to comment. They could also hand-write notes or provide oral testimony to a court reporter.

"I am disgusted with the process," said Tom Tilden, first chief of the Curyung Tribal Council, who had flown up from Dillingham to join the protest.

In an open-mic format, people can hear what's not being discussed and make sure to address overlooked items so an environmental review considers all necessary areas, he said.

"This puts us at a disadvantage," he said.

Sheila Newman, deputy chief of the Corps' Alaska regulatory division, said the format was not created to stifle project critics. Instead, it was designed to take as much input as possible, during the review process that began early this year.

People can also provide comment to the Corps until June 29 online or by mail, after the original, 30-day period was tripled to 90 days following pressure from Sen. Lisa Murkowski and state officials.

Mike Heatwole, a spokesman with Pebble Limited, said the Anchorage meeting was a good opportunity for people to identify the range of issues the Corps should consider in an environmental review.

"It's an identification process and not really a forum on whether you're for or against the mine," Heatwole said.

Gov. Bill Walker has said he doesn't support the mine because he hasn't seen proof it will protect the valuable salmon fishery. But he's also said he will listen to Pebble Limited.

On Thursday, the Walker administration announced it was reviving the Bristol Bay Advisory Group originally established in the 1980s, to boost the state's engagement with Bristol Bay stakeholders on issues such as regional land use and resource management.

Also, on Thursday, the state issued a one-year permit for Pebble Limited to conduct work on its mining claims in the region during the 2018 field season.

The permit "maintains robust oversight of the Pebble Limited Partnership as the company conducts reclamation, monitoring, and exploration activities," Walker said in a prepared statement.

"Bristol Bay supports the most productive wild sockeye fishery in the world," he said. "We should continue to protect that resource, which has sustained the region for generations."