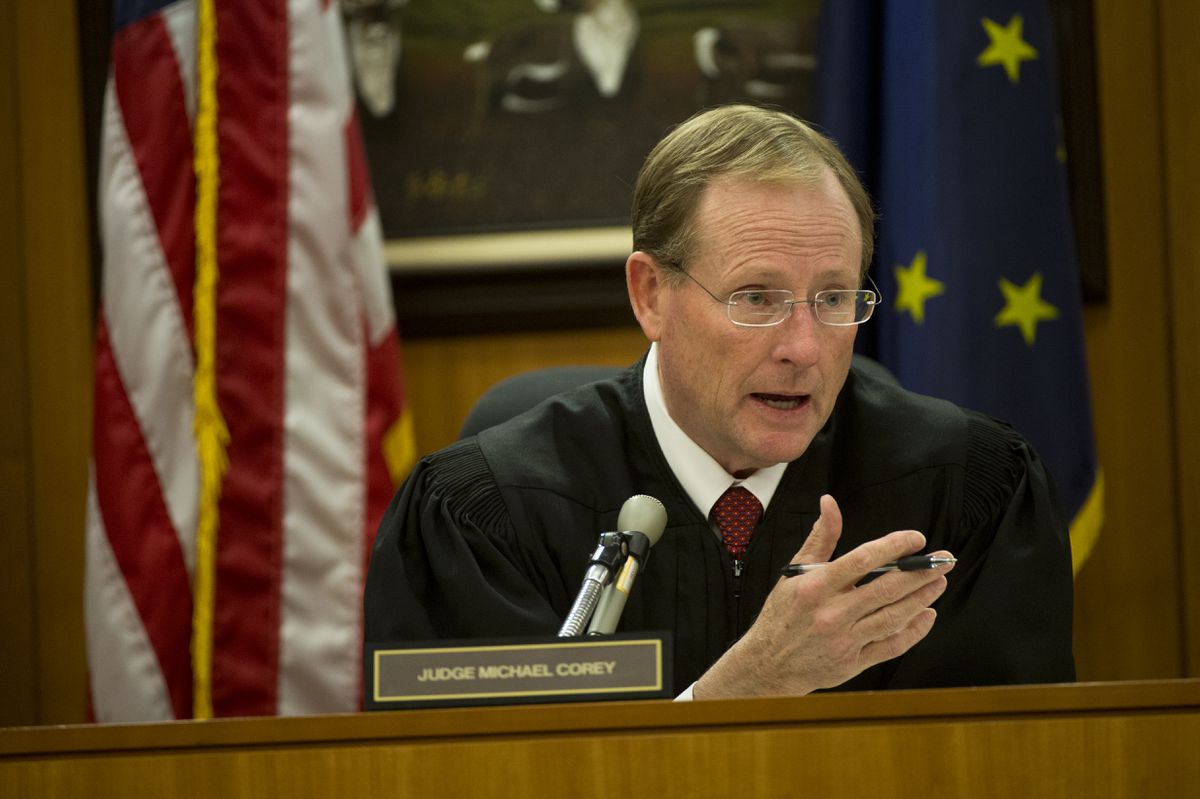 Judge Michael Corey speaks to lawyers during a hearing at the Nesbett Courthouse on November 1, 2018. (Marc Lester / ADN)

Judge Michael Corey speaks to lawyers during a hearing at the Nesbett Courthouse on November 1, 2018. (Marc Lester / ADN)

Alaskans on Tuesday voted to remove Anchorage judge Michael Corey, who became a magnet for outrage for his role in approving a controversial plea agreement.

As of 1:30 a.m. Wednesday with all precincts in the Third Judicial District reporting, voters decided against retaining Corey as a Superior Court judge. Corey was trailing by 9,269 votes.

Corey's ouster by voters in Alaska's sprawling Third Judicial District is the first time in state history that a judge has been voted out as a result of a popular grass-roots uprising. It is also the first time an Alaska judge has lost his or her job based on public anger over a specific judicial decision.

Reached Tuesday night, Corey and his wife said they had "no comment at this time."

Just two months ago, Corey was all but assured a smooth, unopposed road to retention.

All that changed in a 32-minute hearing on Sept. 22, when Corey approved a plea agreement for Justin Schneider, a former Anchorage air-traffic controller who pleaded guilty to choking and sexually assaulting an Alaska Native woman. The deal didn't require any additional jail time for Schneider, who'd spent a year on house arrest.

The agreement — and the prosecutor's widely quoted comment that Schneider was getting "one free pass" — garnered immediate outrage among people in Alaska and made national and international headlines.

Elizabeth and Isaac Williams, an Anchorage sister and brother, formed the "No More Passes Vote No on Judge Michael Corey" campaign in the weeks after the firestorm of publicity over the case.

Working with activists such as Alaska Federation of Natives general counsel Nicole Borromeo, the group held a rally and raised nearly $4,000 from a mix of in-state and out-of-state donors. In recent days, the campaign also aired radio ads telling voters that Corey "chose to let a violent sexual offender walk free—without so much as a mention of the woman he strangled unconscious and defiled."

"We're encouraged that Alaskans feel so strongly about sexual assault and the poor way it is handled they were willing to do something that's never been done in Alaska before — unseat a judge," Williams said Tuesday night.

The Schneider case became the catalyst for a campaign that will continue even after the election, Williams said. The group now plans to focus on what it views as widespread failings of the Department of Law in the way it prosecutes sexual assault and abuse.

The victim in the case has not publicly come forward, but organizers are in touch with her and she has said she's supportive of the campaign to vote Corey out, Williams said.

The group helped find her a pro bono attorney who will represent her in a civil lawsuit she plans to file against Schneider, Williams said.

An online fundraiser has raised more than $3,000 for the woman. The organizer of the fundraiser said the effort is not affiliated with the "No on Corey" campaign.

Corey ran a campaign defending himself. He and his wife paid for social media and radio ads themselves.

Corey gave only one brief interview, to the Daily News, saying he was bound by judicial ethics rules not to discuss the specifics of the Schneider case. In a video posted on his campaign's Facebook page, he told voters that he couldn't talk about the specifics of the case, that judges are bound to follow the law and that he put victims first in his courtroom daily.

Vocal supporters of Corey, including retired judges, local attorneys and others who argued that voting a judge out based on a single decision set a dangerous precedent that would lead to judges weighing their decisions on public reaction rather than the law. Others cited Corey's high marks in the extensive Alaska Judicial Council judiciary survey.

Williams said she harbors no animosity toward Corey.

"I think he failed in his ability to do his job," she said. "But I 100 percent believe his wife, family and friends when they say he's a great man."

In the past, Alaskans have almost always voted to retain judges, but there are signs that might be changing.

The only judges to be voted out since the 1960s have been the subject of a "no" recommendation by the Alaska Judicial Council.

But in recent elections, more people — especially in the most populated Third Judicial District — have been voting against judges.

An Alaska Judicial Council analysis found that 2016 "yes" vote percentages for the Southcentral Alaska district were all below 60 percent, one to four points lower than in the past.

Alaska voters have retained judges by an average of about 60 percent voting yes to 40 percent voting no in the Third Judicial District, which encompasses all of Southcentral and Southwest Alaska.

Corey wasn't the only Alaska judge who got heat from angry voters.

Anchorage Superior Court judges Michael Wolverton and William Morse also found themselves the target of quieter, social media-fueled ire for their parts in approving another unpopular plea agreement, this one in the case of Alexandra Ellis, a teenager who hit and killed bicyclist Jeff Dusenbury with her car in 2014.

Those and the other Alaska judges up for retention ended up keeping their jobs, albeit by closer margins than in the past.

Corey will have 90 days on the bench before he is required to step down, said Susanne DiPietro of the Alaska Judicial Council. The council will then seek to fill the position through its normal recruitment process.

Alaska's newly elected governor will appoint the judge who will fill Corey's position.

Correction: The original story incorrectly described a fundraising effort for the victim in the Justin Schneider case. The online fundraiser for the woman was not affiliated with the campaign against the retention of Anchorage Superior Court Judge Michael Corey, according to its organizer.