‘One free pass’: The story behind the no-jail plea deal that drew outrage from Alaskans 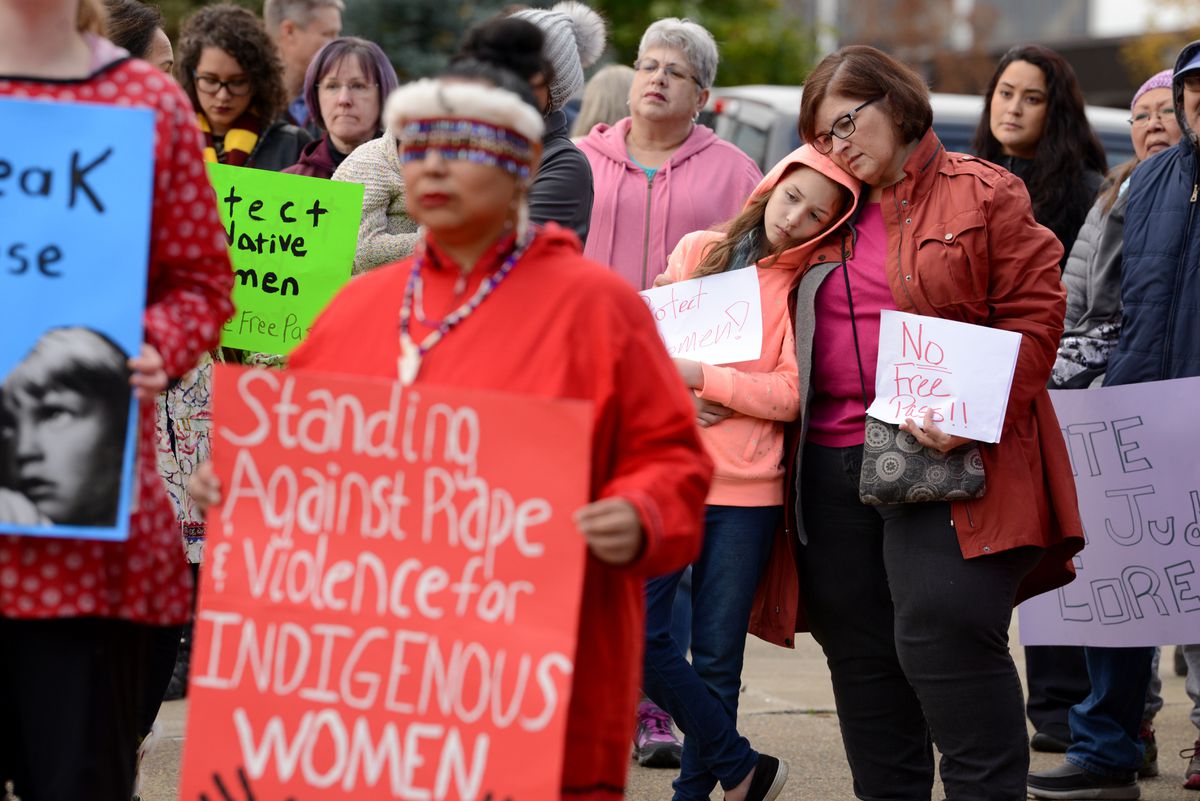 Ada Coyle holds a sign as Ava Robertson leans in to grandaunt Wanetta Ayers at a protest rally in front of the Boney Courthouse in Anchorage on Saturday. The rally was held in protest of Judge Michael Corey, who is up for a retention vote in November. (Bob Hallinen / ADN)

Ada Coyle holds a sign as Ava Robertson leans in to grandaunt Wanetta Ayers at a protest rally in front of the Boney Courthouse in Anchorage on Saturday. The rally was held in protest of Judge Michael Corey, who is up for a retention vote in November. (Bob Hallinen / ADN)

When Justin Schneider stepped out of an Anchorage courtroom in September with a plea agreement that left him no more jail time to serve for choking and sexually assaulting a young woman, outrage quickly followed.

The resolution of the case — and the prosecutor's comment that Schneider was given "one free pass" — has inspired soul-searching and rage about Alaska's high rates of sexual violence, especially among Alaska Native women, and the way such cases are treated by the criminal justice system.

Activists have launched a campaign to recall the judge who approved the plea agreement. On Saturday, dozens of people gathered outside of the Boney Courthouse for a "no more passes" rally aimed at unseating Judge Michael Corey.

But what legal decisions paved the way for Schneider to walk free?

A review of court documents, audio recordings of hearings and interviews with attorneys and retired judges shows the way the Schneider case threaded through Alaska's criminal-justice system to an end result that the parties involved insist was legal — but that the public widely saw as unjust. Victim-rights advocates immediately called the deal into question, candidates for governor issued positions and the case quickly drew national attention.

Looking at the way the case unfolded step-by-step also shows the way that, at crucial legal decision points, Schneider benefited from his relative affluence and prosecutors' inability to involve the victim in the case. And it reveals more about what the judge now facing a campaign against his retention had control over — and what he didn't.

An initial complaint, based on an affidavit by an Anchorage detective who interviewed the 25-year-old victim, provides the only on-record recounting of the crime.

Here's what the complaint says happened: On the afternoon of Aug. 8, 2017,  Eagle River air traffic controller and father-of-two Justin Schneider picked up a 25-year-old woman from the parking lot of the Holiday gas station at the corner of Minnesota Drive and Spenard Road, promising her a ride to Muldoon. Instead he drove her to a dead-end street off Wisconsin Street.

There, he "full on tackled her," knocking her to the ground. He tried to strangle her and told her he was going to kill her. She lost consciousness, thinking she was going to die, the affidavit says.

When she came to, Schneider was zipping his pants. She realized he had masturbated and ejaculated on her.

He explained to her that he "wasn't really going to kill her, that he needed her to believe she was going to die so that he could be sexually fulfilled and ejaculate," the detective wrote.

She told police the man's license plate number. Later, in the emergency room at the hospital, detectives showed her a photo lineup of men matching the description she'd given. She picked Schneider.

"You don't forget the face of the man who almost killed you," she told police.

Police arrested Schneider the next day. The first big decision in the case was what criminal charges Schneider would face.

Prosecutors convened a grand jury. Paperwork shows that the victim testified. After the grand jury, a kidnapping charge was added.

From the beginning, none of the charges constituted a sex crime. The kidnapping charge was an unclassified felony, the most serious level. The assault charges for strangling the victim were B and C felonies. The harassment law Schneider was charged under was a misdemeanor, for putting a bodily fluid on a person without their permission.

The Walker administration has said it plans to push for legislation to close the sex crime loophole.

Next came another decision that would end up having a big impact on the case's resolution: Would Schneider be released on bail?

At a bail hearing in late August 2017, the prosecutor and privately hired defense attorney Mike Moberly worked out a proposal.

Because Schneider's wife had two young children to care for and wasn't an ideal third-party custodian, Schneider would pay for a private electronic monitoring company in Kenai to put him on an ankle monitor so he could live with his parents in Homer.

Schneider's affluence and stable family situation worked in his favor. His parents, both career Salvation Army officers who ran a church and thrift store, were deemed excellent third-party custodian prospects.

Schneider spent most of his time on house arrest on a property with a view of Kachemak Bay that housed the church his parents worked for.

Meanwhile, assistant district attorney Andrew Grannik couldn't find the victim, according to the Alaska Department of Law. Without a victim willing to testify in court, "it would have been extremely difficult, if possible at all, to proceed with a trial" in the case, Skidmore said.

How hard did the district attorney's office work to find and gain cooperation from the victim?

Grannik, a former oceanographer who immigrated to the United States from the Soviet Union as a political dissident, tried calling and sending letters to the phone number and address he had for the victim, but couldn't reach her, said Skidmore. Detectives at times help prosecutors locate victims. They can even be subpoenaed, legally forcing them to testify at trial.

If a victim doesn't want to participate in prosecution, they shouldn't be forced against their will — even if it means prosecutors will have a hard time making their case, said Keeley Olsen of Standing Together Against Rape.

"It is the right of any individual to determine how much they want to participate in that system," she said.

An Anchorage Daily News reporter was able to make contact via the internet with the victim within an hour of learning her identity. She initially expressed interest in telling her story but stopped responding to messages.

By September, a little over a year after the crime and with no trial in sight, the attorneys reached a plea agreement.

Nationwide, more than 95 percent of criminal cases are resolved with plea bargains. Attorneys say the rate is about the same in Anchorage.

On Sept. 19, the parties met in the courtroom of Anchorage Superior Court Judge Michael Corey, a longtime private attorney appointed to the bench three years ago.

The hearing began with Grannick explaining that he couldn't reach the victim.

The attorneys presented agreement they had worked out: Schneider would plead guilty to a single charge of second-degree felony assault in exchange for the remaining assault, kidnapping and harassment charges being dropped.

None of the charges involved a sex offense. Schneider still agreed to sex-offender treatment as part of the plea agreement.

Much of the rest of the 32-minute hearing focused on Schneider's prospects for rehabilitation.

A psychologist Schneider had been seeing was of the opinion that Schneider was at low risk for re-offending, Grannik said.

"That's the reason I've made the deal I've made. Rehabilitation here is (the) main issue," he said.

"This allowed him an opportunity to deal with something that could have caused problems down the road, or far worse," Moberly told the judge.

The victim only came up once.

Moberly, the defense attorney, told the judge the psychologist thought Schneider  "empathized with (the victim) early on."

Then it came time for Corey to approve or reject the plea agreement.

In Alaska, judges can reject a plea agreement on the grounds that the sentence being proposed is inappropriate.

But they can't reject a plea agreement based on the reduction in the charges.

That distinction made a big difference here: Corey had to evaluate a legal sentence for the single remaining second-degree assault charge.

But he couldn't consider the dropped kidnapping, assault and harassment charges.

In practice, Alaska judges rarely reject plea agreements, lawyers familiar with the system say, and at times when they have in the past, higher courts have overturned them.

Corey then had to evaluate the sentence proposed. Judges must follow sentencing guidelines set by legislation that give a range for how much time a person should spend in prison for a crime.

For a second-degree assault, the range is zero to two years for a first-time felony offender. The deal was for Schneider to serve two years with one suspended.

Judges can exceed the sentencing guideline range if the prosecutor has proved or both sides have agreed there's an "aggravator."

One example of an aggravator is that the crime was one of the most serious in its class, or that the victim was especially vulnerable. Judges cannot propose an aggravator, and the prosecution didn't present one as part of the deal.

Moberly asked for the time Schneider spent on house arrest to count against his ordered jail time.

Under Alaska law, time spent on electronic monitoring that "imposes restrictions on the person's freedom of movement" can be counted as days in jail under a case law principle called "Nygren credit."

In this case, the time definitely would have counted because Schneider was on house arrest, said Allen of the district attorney's office.

What could Corey have done differently? Different people have different opinions.

Some say he could have stopped the hearing and asked for more briefing on aspects that were troubling him. He could have pressed the prosecution on how hard they'd tried to involve the victim. He didn't.

But in audio of the hearing, Corey expressed some trepidation at approving the plea deal.

"I've never known Mr. Grannick to be a pushover," he said. "It says a lot that he is advocating for a sentence that at first blush would really quite frankly strike me as way too light."

But, he said, the attorneys knew "far better and more about the case than I do presently. They know more about what can be proven and what can't. They know what access they have to witnesses and what they don't."

He hinted that he knew the public might be shocked by what he was about to do.

"I think those who learn about what is transpiring here today would find the result breathtaking," he said.

[The Anchorage Daily News is reporting on sexual abuse in Alaska. If you have a story to share, or believe there is information we should know about a person or case, please fill out this confidential form.]