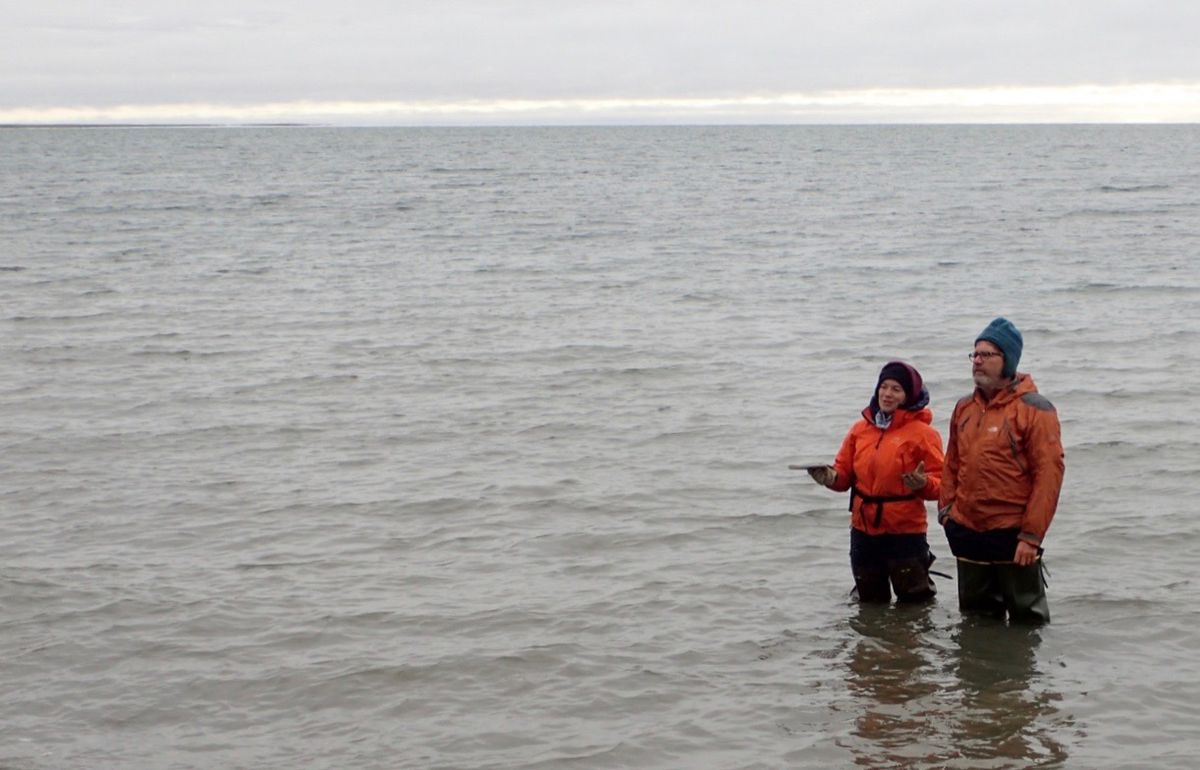 Fifteen miles inland from the frozen coast of the Arctic Ocean, Teshekpuk Lake is one of the largest freshwater bodies in Alaska. On its northern shoreline are sandy bluffs that hold fossils of walrus, ringed seals and beluga. Thousands of years ago, this shore was an ocean beach.

Digging into that beach in the middle of the tundra, a Fairbanks researcher has found evidence for what she describes as a “rogue ice sheet that isn’t on the map.”

Louise Farquharson wrote about that ice mass in a 2018 issue of the journal Geology. She describes something not currently in textbooks — a floating ice shelf that covered the Arctic Ocean and rammed into the coastline of northern Alaska about 80,000 years ago.

The first clues to the phantom ice cap emerged when Farquharson, a postdoctoral researcher at UAF’s Geophysical Institute, visited UAF’s Ben Jones at a research cabin he has restored and maintained on the northern shore of Teshekpuk Lake, about 60 miles southeast of Utqiaġvik.

While Farquharson was helping Jones in a study of northern lakes a few summers ago, he encouraged her to gather some samples from the bluff, including remains of whales and shellfish that were thousands of years old.

“These exposures were dripping with fossils,” she said.

Back in the laboratory, Farquharson used a sophisticated method to estimate when buried grains of sand in the bluff were last exposed to sunlight. That’s when she discovered something puzzling — her samples dated to a time when global sea level was so low that the ancient beach should have been a hilltop.

“It was a very exciting turn,” she said.

What were all those ocean-dwelling creatures doing on a landscape that should have been high and dry, the stomping grounds of mammoths?

Something very heavy must have been pressing down on the land, forcing northern Alaska under water, Farquharson thinks.

She and her co-authors on the paper, including Jones and UAF’s Dan Mann, eliminated other explanations for the elevated beach, such as that tectonic forces lifted it up.

After much debate, they concluded that the Arctic Ocean was once covered by ice. Not by a thin layer of sea ice as it is today, but by a massive, 1,000-foot thick ice shelf, fed by an ice dome sitting over arctic Canada. The edge of the ice shelf leaned onto the Beaufort Sea coast, depressing the land enough to create the beaches exposed at Teshekpuk Lake.

Other long-gone ice bodies have left behind more evidence. The Laurentide Ice Sheet once covered most of Canada and a wide sweep of the Lower 48. At the Laurentide’s peak 21,000 years ago, Montreal was buried under 10,000 feet of ice; Long Island was a mound of glacial debris at the toe of the ice sheet.

Floating ice shelves, such as some in Antarctica today, can be thousands of feet thick, but once they are gone they leave only subtle records of their passage — unless they touch land, which seems to have been the case in northern Alaska.

Others have hinted at the possibility of ancient ice covering the Arctic Basin. A decade ago, UAF marine geologist Bernie Coakley found glacial scour marks on the floor of the Arctic Ocean that were too deep to be caused by sea ice or icebergs.

An unknown giant ice shelf may also explain the pinkish boulders stranded on the northern tundra. Catching the eye of pilots each summer, the rocks dot the coastal plain as far as nine miles from the Arctic Ocean. Geologists have traced these rocks to outcroppings hundreds of miles to the northeast in Canada. The ice tongue that created the Teshekpuk Lake beaches could have been part of a conveyor belt that carried the boulders to northern Alaska.