Part 6, November: After months of treatment, Randall goes under a surgeon’s knife and hopes for the best.

Activity swirled around Kikkan Randall for hours while she waited for her surgery to begin at Providence Alaska Medical Center. Doctors and nurses came and went. She had little left to do but breathe deeply and trust that her regimen would prove effective in the outcome. Nervous energy battled calm confidence.

These were familiar feelings.

“It kind of feels like a race day,” she said.

The marking was to ensure an incision was made on the correct side, but to Sandford it was something more.

“It’s a way to focus the team in the operating room, that the next two hours are about us all doing our best job to make sure that everything goes right,” Sandford said.

In the first weeks after she learned she had cancer, Randall thought she would have a mastectomy, the complete removal of the breast. But as the months passed and chemotherapy shrank her tumor, she leaned toward a less extensive option, a lumpectomy, if doctors agreed.

She had discussed the options in a consultation with Sandford. Reconstruction sounded like a long process with potential for complications and could affect her physical activities.

By the time of the operation, Randall’s tumor had shrunk too small to feel, Sandford said, a good sign that chemotherapy was effective. But only surgery could provide proof.

Sandford expected to remove an area the size of a walnut, taking a centimeter more tissue than she believed to have been cancerous in Randall’s right breast. But finding exactly where abnormal cells end and healthy tissue begins is inexact while the patient is on the operating table.

Afterward, pathology studies would provide clear indications about whether the surgery established clean margins around the area, but those findings take days. Sometimes women need multiple surgeries to get all the tissue of concern.

“We really care about these margins,” said Sandford, who does more than 200 breast cancer-related surgeries each year.

Whatever the results of surgery, it wouldn’t be the finish line for Randall’s treatment. Six weeks of radiation would follow weeks later. Still, the milestone was huge.

“It’s starting to feel like we’re over the halfway mark and getting back to normal life soon,” Randall said.

A nurse pushed Randall’s gurney through a set of flapping double doors toward the operating room where she was anesthetized.

Ronn Randall, Kikkan’s father, waited in the lobby as time slowed to a crawl. Three hours passed before the surgeon emerged with an update.

Sandford said her incision revealed white-ish, shiny tissue. Radioactive blue dye traced the path to where the tumor had drained toward five lymph nodes, which were removed. But what she and pathologists didn’t see was as important as what they did.

“They didn’t see any tumor,” Sandford said. “It looked like an area where there’s been inflammation and a fight’s gone on, and we don’t see anything that looks like cancer.”

“Now, again, we’ll want to wait for permanent pathology,” Sandford said, before she retreated to tell her patient.

Randall woke up under warm blankets feeling no pain. Her voice was scratchy from intubation. Her head was swimming but her mind was at ease.

“I feel just as good as when I came in, except I get a popsicle now,” she said.

Deborah Randall said her daughter was walking on air in the days after the surgery, her spirit as high as she could remember. Just two days after the operation, Kikkan skied with Alaska Pacific University athletes in Palmer. She used only a left-hand pole to give her right side a break.

Later that day, a text from her surgeon pulled her back down to earth. The message was unsettling in its brevity.

“Path(ology) back. At least a verbal,” Sandford wrote. “You can call me.”

Invasive carcinoma was not discovered. That was great news.

But Sandford called one margin “close.” Cells of ductal carcinoma in situ (DCIS), cancer not likely to spread or immediately threaten life, remained on one edge of the removed tissue. The presence of DCIS would mean elevated risk of invasive cancer’s eventual return if left untreated, Sandford said.

Kikkan drew a flow chart to sort her options. Sandford believed Randall had exhausted the usefulness of chemotherapy to eliminate malignant cells. A second operation, however, could also show the extent of DCIS-affected tissue, information that might lead to a conclusion that a full mastectomy was the best response after all.

Randall decided to go back into surgery even before she finished spelling it out on paper.

Randall was wheeled into her second surgery just five days after the first. She wore another paper crown before it began and slurped another popsicle when it ended.

But one thing changed. She wasn’t floating on air. The second time, a sobering realization came home with her from the hospital, even before final pathology results returned.

“We’re going to get through the majority of the treatment, but the worry will never totally go away,” she said.

Sandford sent Randall a text a day after the second operation. It carried the news in goofball animation: a lady with bouffant hair in a green cocktail dress danced enthusiastically.

The next day, Sandford gave Randall a knuckle bump in the waiting room to celebrate what she called a “complete response.” The pathology paperwork read “No residual in situ or invasive carcinoma is identified.” Handwritten by Sandford beneath it: “Woot woot.”

That day, Randall ate a turkey sandwich from a hospital lunch counter and described what she loved about the team sprint format, the cross-country skiing event that brought her gold nine months earlier.

Two skiers trade laps, three legs apiece, on a sprint course. There isn’t time to recover from a leg before bolting into the next. A skier must rely on others and on her own will to endure.

“It’s striking how many similarities there are between skiing and battling cancer,” Randall said.

Her relief was only one of many emotions. Later, she would have to sort through this year that would surely define much of her life. She had barely been able to thank people who had supported her skiing career when she retired. Now there were many more people to thank.

If cancer changed her, she said, it has made her less hesitant to reach out.

“You don’t know how much time you have. So it’s more important now to say, ‘You’re important to me. I’m going to make seeing you a priority,’ ” she said.

Thinking back, the thrill of winning that gold was greater than she had imagined the moment might be. It brought Randall a sense of validation. But as 2018 comes to a close, Randall said the moment also seemed fleeting.

“Going through something like this so quickly afterwards maybe just puts it into perspective a little bit,” she said. “The gold medal is cool, but it’s not the most important thing in life.”

Randall still looks forward to sharing her gold medal, but there’s more to the story now.

On her final errand that day, a day before she returned home to her husband and son in B.C., Randall visited the radiation clinic where six weeks of treatment would soon begin. Under her winter hat, hair had begun to regrow.

An office staff member who scheduled her first appointment extended to bump knuckles too, excited to meet her. “Where’s that gold medal?” he asked. 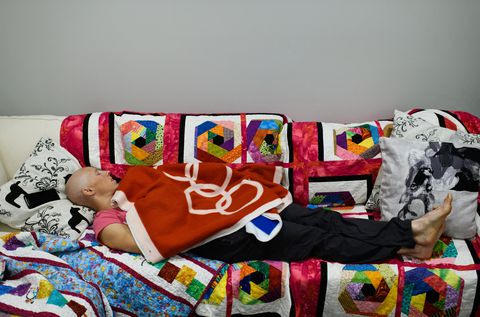 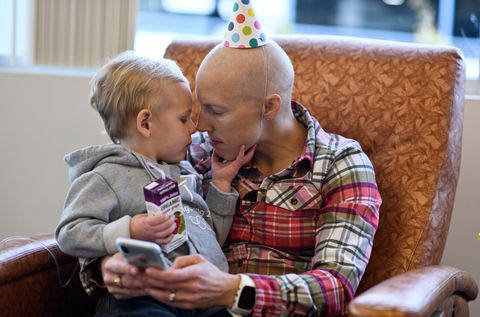