Alaska population drops for second year in a row 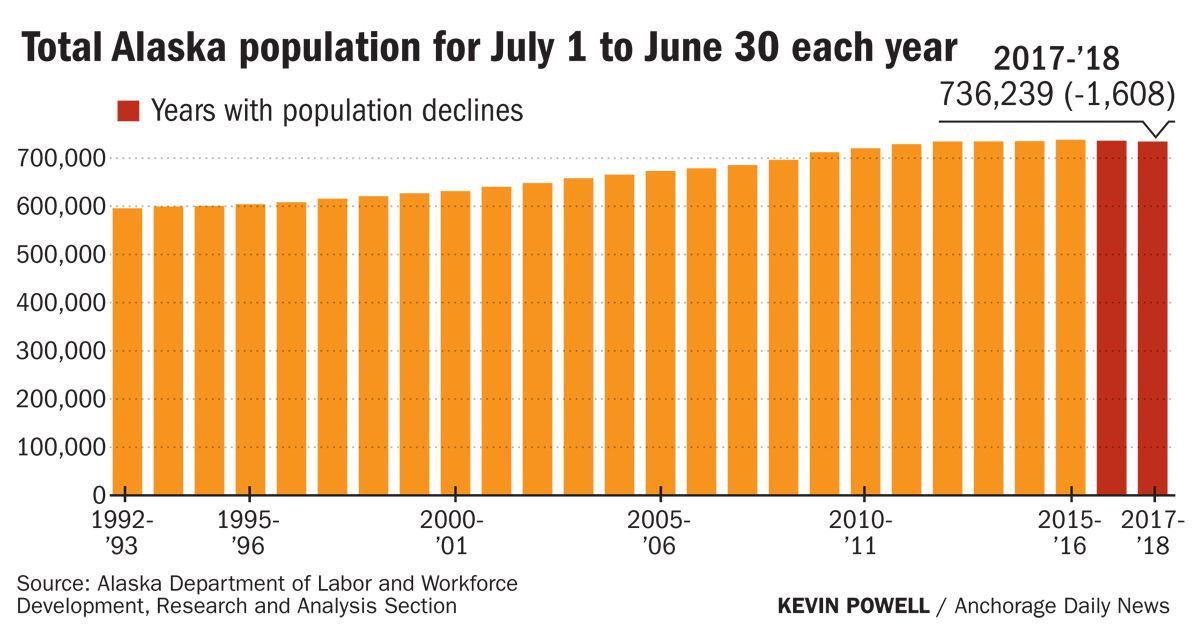 For the second year in a row, Alaska’s population shrank in 2018.

From July 2017 to July 2018, the state’s population declined by 0.2 percent — 1,608 people — according to estimates released Thursday by the Alaska Department of Labor and Workforce Development.

The state’s natural population increase — the number of births minus the number of deaths — added 5,969 people from 2017 to 2018. But because the state also had a net migration loss of 7,577 people during that time, the population overall dropped.

Last year was the sixth year in a row Alaska had a net migration loss, meaning more people moved out of the state than moved in. That’s the longest stretch on record for Alaska, said state demographer Eddie Hunsinger.

The fact that those negative outflows started before Alaska’s economic downturn began in 2015 is probably tied to a stronger economy in the Lower 48, Hunsinger said.

[Alaska is expected to gain jobs in 2019 after 3 years of losses, state says]

The population decline in 2017 was Alaska’s first since the recession of the 1980s.

The area with the biggest population loss last year was Anchorage, which lost 2,386 people. The Matanuska-Susitna Borough had the biggest gain, adding 1,355 people.

That the millennial age bracket aligns closely with childbearing ages right now “should help with birth rates,” Hunsinger said, “but the rates of childbearing are falling in recent years.”

The 65-and-older age group was up more than 5 percent, while the 18-to-64-year-old demographic and the under-18 age group each declined 0.9 percent.