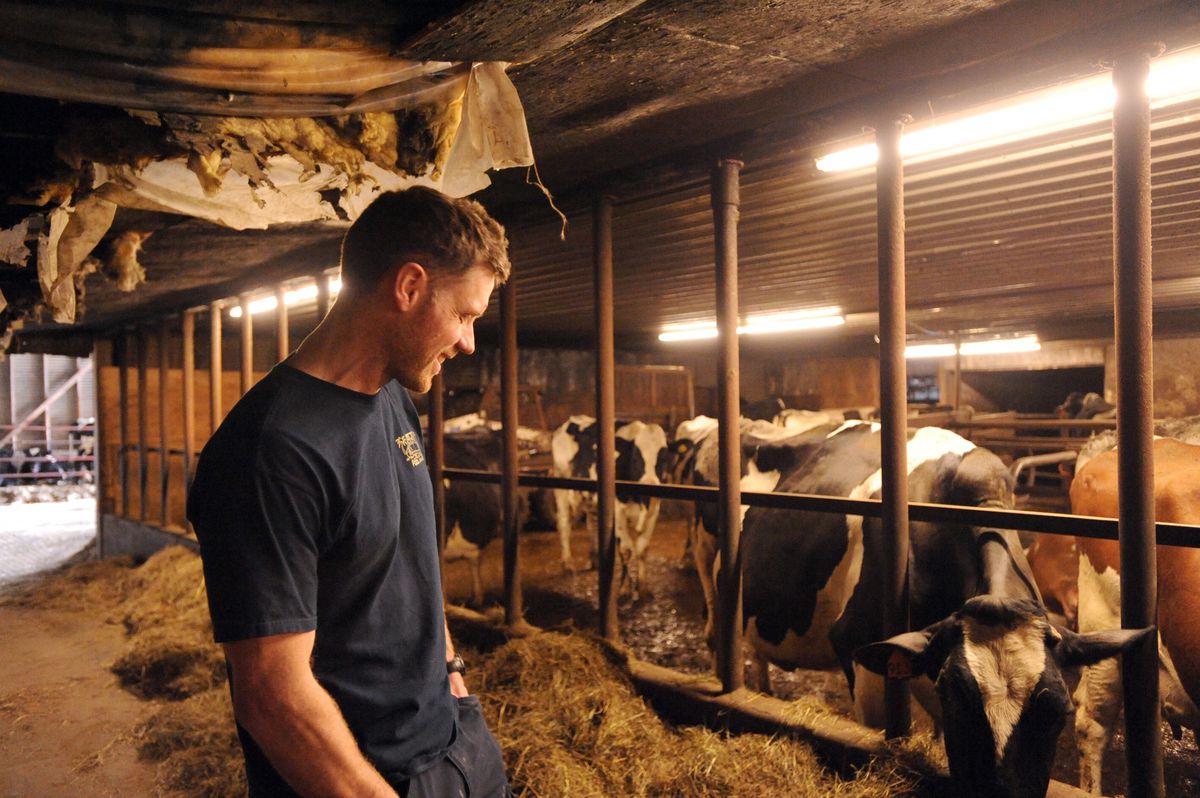 WASILLA — Ty Havemeister runs Alaska’s last commercial dairy, an old-fashioned spread with 150 cows on rolling ground between Palmer and Wasilla settled in the 1930s by his grandparents as part of the Matanuska farm colony.

Gov. Mike Dunleavy’s proposed budget includes the elimination of the state’s only dairy inspector, a cut that would shutter the Havemeister farm that now sends 5,000 gallons of milk every week to coolers at Fred Meyer, Carrs and Three Bears.

Havemeister, an affable 38-year-old who moved back to Alaska from a financial job in Florida to help his parents run the family business, doesn’t consider himself a big-government guy.

But he’d welcome a visit from the state at this point. Otherwise, without someone to check for compliance with federal regulations, the farm is out of business.

“I never thought I’d say it, but if I could continue to be inspected, that would be great,” Havemeister said.

The governor’s proposed budget cut would also stop progress on two other dairy farms in the works in Fairbanks and on Kodiak Island, officials say.

Both dairies have bought equipment and requested inspection, according to state veterinarian Bob Gerlach. They’re watching the budget process closely.

“They’ve already put the money out to get their operations started, and are concerned,” Gerlach said.

Kodiak Baptist Mission Heritage Farms spent between $20,000 and $50,000 establishing what backers hope will be the first certified goat dairy in the state, according to owner Kelli Foreman. The mission operates a large child-care facility, and the farm would serve children there as well as potentially sell to the Coast Guard base or the schools.

Without a state inspector to make sure the dairy complied with federal regulations including pasteurization, the milk couldn’t be sold or given to the children, Foreman said.

“It would be a big blow to not have the state have a dairy program,” she said. “We’re a disconnected island. Every step that we can take toward food sustainability is huge for us.”

The dairy program cut would save about $180,000 a year, according to the state Office of Management and Budget. That includes the state inspector salary plus any health benefits and pension.

It isn’t clear why it costs so much. Farm advocates say it shouldn’t, and that the state should look at cutting costs before they cut the position altogether.

Funding for the dairy program, however, was restored in preliminary budget documents. The House DEC finance subcommittee on Thursday adopted a budget report that rejected Dunleavy’s proposal to eliminate the program and four other budget changes. The report now goes to the House Finance Committee.

The state inspector is crucial to continue Alaska’s compliance with federal regulations requiring four inspections a year at a dairy plus monthly milk sampling.

State officials say the dairy program is more involved than just paying a person to go visit the Havemeister dairy every three months.

The inspector goes to farms to monitor animal health but also inspects the dairy processing plant where the milk is bottled, Gerlach said. The tankers that haul milk are inspected, as are the plants that manufacture the plastic bottles. Pasteurizing plants also require oversight. The funding also goes toward the state lab that tests milk samples to make sure they’re properly pasteurized and bacteria-free.

The state budget director, Lacey Sanders, said Friday the salary “pays for a person, a single person” within the DEC budget who inspects dairies.

“Unfortunately with the lack of dairies in the state ... the full cost of that dairy can’t be covered by charging fees like normal programs would be,” Sanders said.

Asked if late word that two other dairies hope to go into business changed anything for the governor, she said Dunleavy “has not made any changes to this program and I’m not sure that even having three dairies ... I don’t know that those dairies could pay $60,000 a year to cover that cost.”

Sanders suggested the dairies make an offer to the Legislature to share the cost if they wanted to.

Havemeister says he doesn’t understand why a governor who wants to boost Alaska’s private sector would want to undermine his business.

His family resumed commercial operations in 2011 to supply Southcentral with at least a small-scale dairy as the Matanuska Creamery teetered toward eventual shutdown amid heavy state subsidies and a federal investigation into misuse of grant funds.

Now, Havemeister said at the farm Friday, he’s got loans to pay, repairs to his aging barns, and the usual costs of running a dairy operation that takes 12 tons of grain every 10 days.

Nobody even told him the program was slated to be cut, he said. “I didn’t see this coming."