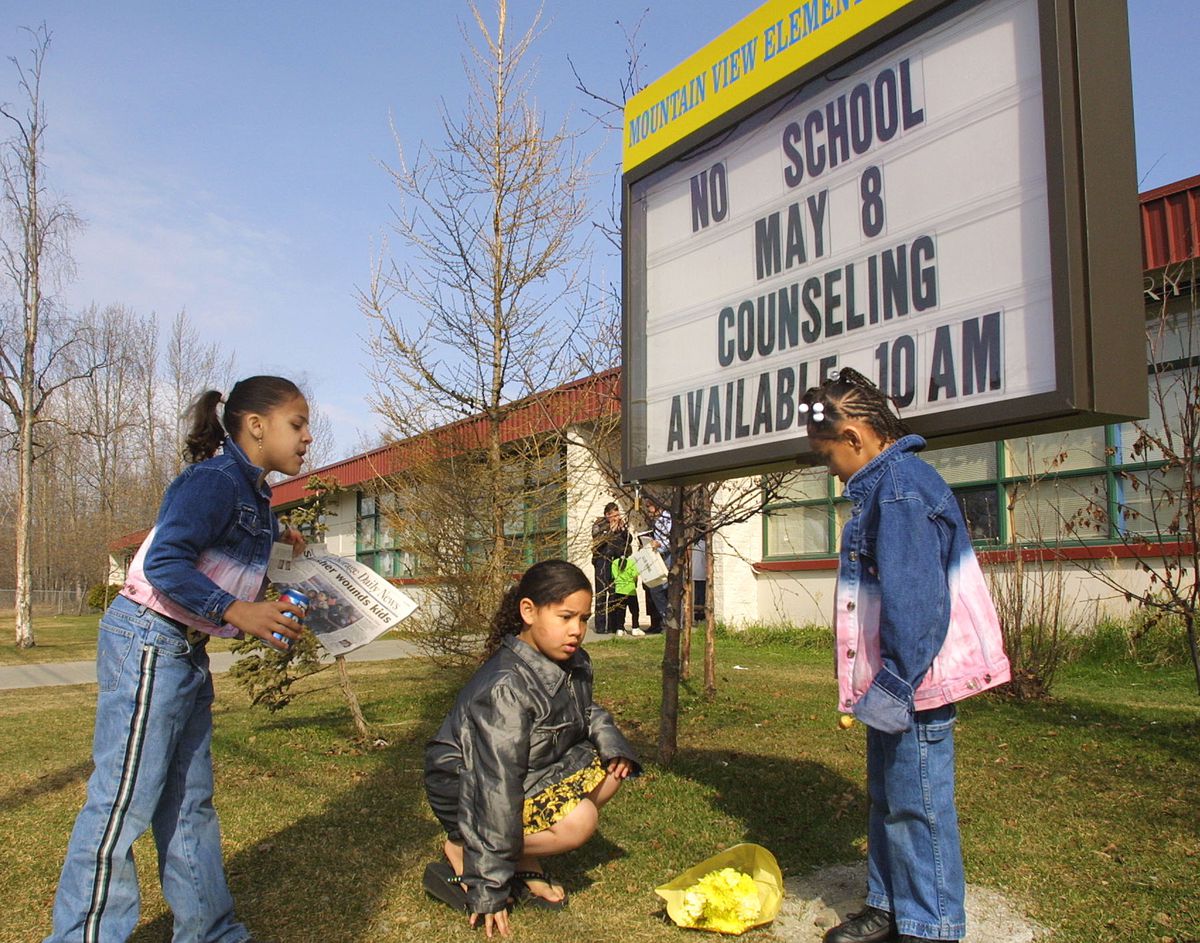 This story was originally published on May 8, 2001.

A man who told one victim ''Get ready to meet your maker'' attacked children with a fillet knife early Monday morning at Mountain View Elementary School, slashing and seriously injuring four young boys before he was cornered by teachers and disarmed by police.

The attack sent some children screaming into the school and others fighting to protect their classmates. It ended minutes later with dozens of children locked in rooms guarded by teachers. A teacher confronted the assailant in a classroom and used a desk and then a plastic bin to keep the man off a wounded, sobbing boy who lay bleeding on the floor, according to a witness.

The boy ''was crying and talking, saying ‘Please don’t kill me, please don’t kill me,’ '' said Randy Smith, head of the Mountain View Community Patrol, who responded to the scene and helped other teachers prevent the man from escaping the room. ''He was ranting and raving and threatening all of us with the knife.''

Within minutes, police armed with several types of weapons entered the classroom and shot the man in the arm, leg and hand with a beanbag projectile containing steel shot. The final blow broke the man’s hand, forcing him to drop the knife, according to Anchorage police.

The four victims, all 8 and 9 years old, each underwent surgery Monday for wounds to the neck, throat and head. All are expected to survive, said police spokeswoman Anita Shell. Cody Brown, 8, and brothers Billy Moy, 8, and Eric Moy, 9, were listed in serious condition in the pediatrics intensive care unit at Providence Alaska Medical Center. The fourth victim, Stephen Hansell, 8, was in fair condition at Alaska Regional Hospital on Monday evening.

''He was really concerned about his classmates when he woke up,'' said an uncle of Hansell’s, Rob Lee. ''He’s pretty tough.''

The attack triggered a massive response and investigation by Anchorage police, with more than 30 detectives combing the school grounds and the school hallway for evidence and interviewing at least 50 children and teachers who witnessed the attack, according to Deputy Chief Mark Mew.

School superintendent Carol Comeau said the district will review all safety procedures at Mountain View and other schools. Classes were canceled at Mountain View today to allow staffers and children to meet with counselors. Police were still sorting out the sequence of events Monday and don’t know what motivated the attack, said spokesman Ron McGee.

When first in custody, the man lay facedown on the seat of the patrol car, according to Sgt. Bill Kaas. Then he would not answer questions or give his name, forcing police to identify him with fingerprint records and officers who recognized him from a previous incident, said Police Chief Walter Monegan.

''We heard that he may have known one of the students, but we can’t confirm that,'' McGee added. ''He has been uncooperative. He is not saying anything.''

Children and staffers from the school were bused to nearby William Tyson Elementary, where they were reunited with parents and questioned by police. Interviews with students who witnessed the attack describe a horrifying bolt of swift and inexplicable aggression.

The man approached the school about 8:15 a.m. while some students were lining up to go inside for breakfast and others were on the playground, witnesses said. Police later estimated that about 50 students were outside the school at the time.

Third-grader Parrish Rowell, 9, said he was walking to school with some friends when he noticed a man on foot behind them. Moments later, Rowell saw the man trying to grab 8-year-old Potasi Uta. Rowell ran into the school. Uta said he jumped away and then curled up into a ball on the ground next to a wall.

Without speaking, the man bent over and tried to cut him, Uta said. The boy leaped up, struck the man in the stomach with his elbow and ran into the parking lot and then into the school. He said a teacher told him to hide in his classroom.

Billy and Eric Moy were waiting to be let into the school for breakfast with their sister, Ashley Smith, 11. She saw the man grab one brother and cut him.

Then she saw the other brother holding his throat, which was bleeding. Sixth-grader Kevin Bruno, 12, was playing basketball before school when some other kids told him a little boy was getting stabbed. He ran over to where the man was hurting a boy, whose name he didn’t know.

''I saw him on top of the kid, stabbing him. I told him to get off. He wouldn’t, so I hit him,'' said Bruno, visibly shaken.

Bruno threw himself into the man with his shoulder, ''like a football hit,'' and knocked him away. He told the boy to get to the school nurse. The man jumped up and chased Bruno and some other children. Bruno told them to run into the school. But one of the children, later identified as Cody Brown, didn’t get away, Bruno said.

''He got this other kid and tried to slit his throat,'' Bruno said. Bruno ran around the building and knocked on windows to alert teachers. Through a window, he could see the man grappling with a male teacher.

In one of the most chilling incidents, Stephen Hansell, a second-grader, was asked for his name by the man, whom he didn’t recognize, according to his uncle Lee.

''OK, Stephen, get ready to meet your maker,'' the man told the boy, according to Lee.

Hansell was then cut from his temple to near his throat, according to his father, Dwayne Hansell.

As the children ran into the school, teachers directed them into classrooms and offices with the idea of locking the doors, following a drill practiced last week. Mountain View principal Doris Ross called 911 at 8:28 a.m, according to police logs.

A great deal of blood was left in the main hall, according to witnesses. Fourth-grader Pazong Yang, 10, said she was taken into a classroom by a teacher, who ordered the children to get under tables and said she would lock the door. But before the teacher could seal off the room, the suspect rushed in, Yang said. The man pushed the teacher down, and then a male teacher rushed in and knocked the attacker down. The children then ran out of the room, Yang said.

Randy Smith and George Smith, members of the Mountain View community patrol, were taking a car to a mechanic when they heard the call on the scanner.

The two men entered the school and saw commotion down the hall in front of a classroom on the east end. The attacker had pushed desks into the door, which had broken glass. Randy Smith said he and several teachers pulled the desks out of the way and confronted the attacker in the room. As Pritchard was cornered in the classroom, he kept muttering to himself about God, George Smith said.

A male teacher kept the attacker off a wounded, crying boy lying on the floor, Randy Smith said.

The identities of the boy and the district employee could not be confirmed Monday.

''The first two officers showed up, and they confronted him with their guns drawn and got his undivided attention,'' Randy Smith said. ''It was just long enough for the teacher to grab the kid and drag him out into the hall.''

Randy Smith praised the actions of the teachers in the school. '

In the aftermath, police scoured the grounds and searched the roof. Officers with dogs checked the woods for other victims. Several neighborhood kids stood across the street looking at the school, parts of which were cordoned off with yellow crime scene tape.

Francisco Ozuna said he hid in the classroom next to where the attacker was finally stopped.

By midday, Classroom 13, where Pritchard was taken into custody, was still littered with papers and markers and overturned desks. Through a window, one could see the day’s schedule on the board: play practice at 9 a.m., math at 10 a.m. A brightly colored kid’s backpack lay on the floor. A large pool of blood had soaked the carpet. Nearby was a bloody print of a child’s right hand.