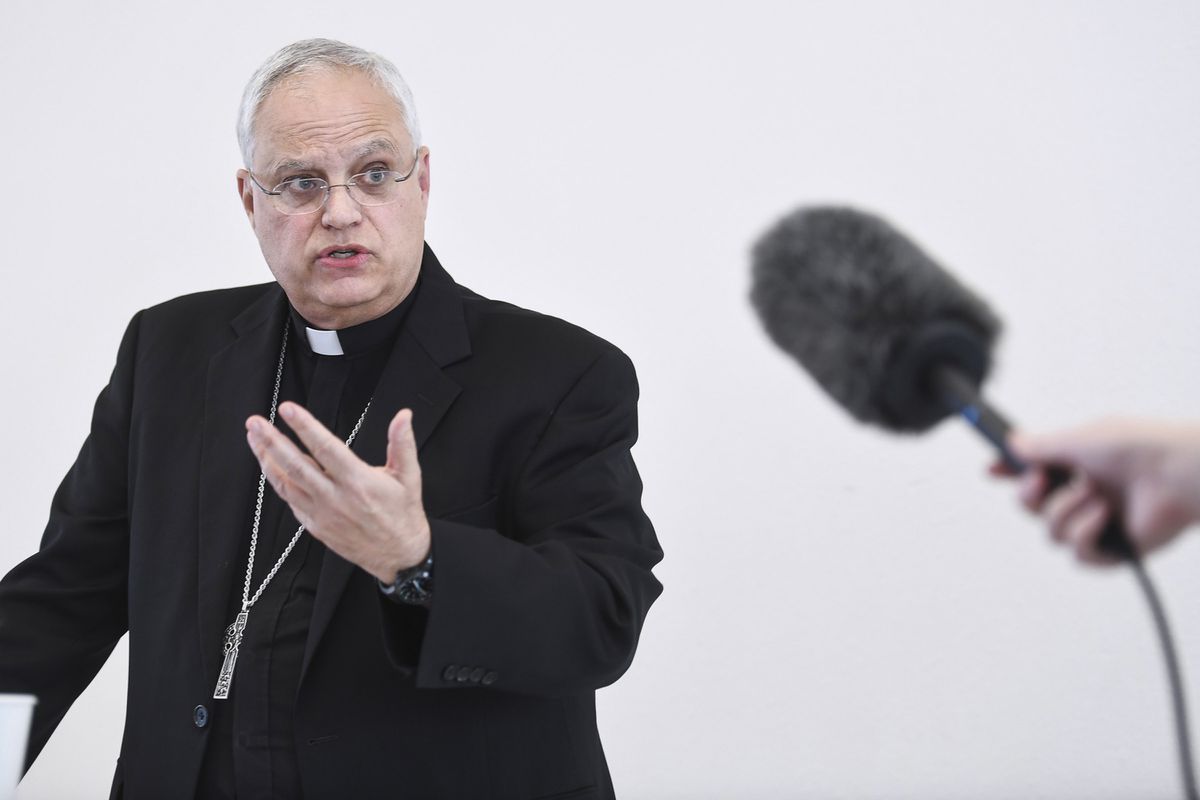 In this photo taken Wednesday, Aug. 21, 2019, Father Andrew E. Bellisario, the bishop of the Diocese of Juneau, holds a press conference to talk about an independent review he commissioned on allegations of sexual misconduct by clergymen in the Diocese of Juneau. (Michael Penn /The Juneau Empire via AP)

In this photo taken Wednesday, Aug. 21, 2019, Father Andrew E. Bellisario, the bishop of the Diocese of Juneau, holds a press conference to talk about an independent review he commissioned on allegations of sexual misconduct by clergymen in the Diocese of Juneau. (Michael Penn /The Juneau Empire via AP)

An independent review has found credible accusations of past sexual misconduct against seven clergy members of an Alaska Catholic diocese, including a former priest who died in a July plane crash and another priest who was placed on administrative leave in recent months, church officials said Thursday.

The Diocese of Juneau released the results of the review, which identified six priests and a religious brother as those accused of misconduct involving minors or vulnerable adults during the diocese's nearly 70-year history.

Bishop Andrew Bellisario could not immediately be reached for comment. At a press conference Wednesday, he offered a "very sincere" apology, the Juneau Empire reported.

"It brings a lot of shame and a lot of regret and a lot of sorrow to me personally as bishop of this diocese, but it is something that needs to be expressed to those who have been harmed," he said.

In a letter Wednesday to church members, Bellisario said he established an independent commission consisting of former judges and a police official last December to review all personnel files going back to the diocese establishment in 1951.

"To the survivors of clerical sexual abuse, I want to say that there are no words that can restore the innocence that was cruelly and unjustly stolen from you when you were a child or an adolescent," Bellisario wrote.

Bellisario said the review was prompted by other revelations of abuse, including the results last year of a Pennsylvania grand jury report that listed more than 300 priests and outlined details of sexual abuse allegations.

Few details of the allegations were disclosed in the Alaska report.

Among those named was Michael Nash, a Wrangell attorney and pilot who died in a plane crash July 11 near Ketchikan, said diocese spokesman Dominique Johnson.

Nash, who was dismissed by the diocese in 2005, was the only occupant in the plane. According to the diocese report, Nash was accused of sexual misconduct involving minors between 1979 and 1982.

Two other priests named in the report died in years earlier.

Henry Leo Sweeney, who died in 1959, returned to the ministry after after he was convicted of intent to rape and contributing to the delinquency of a minor in 1952. Francis Cowgill, who died in 2000, was accused of sexual misconduct involving minors between 1956 and 1964.

The diocesan spokesman said he didn't know the whereabouts of the four surviving men named in the report. The Associated Press was unable to reach them. They were identified as:

• Edmund Penisten, a priest who remains a clergy member with the diocese and was placed on administrative leave in May. He was accused of viewing child pornography in 2010. Johnson said Penisten’s future with the diocese is under review.

• Javier Gutierrez, a priest accused of sexual misconduct involving minors and vulnerable adults in the 1980s. Javier left Alaska, and in 1989 began serving in the Diocese of Tijuana. Johnson said Javier was dismissed by the Tijuana Diocese last year. A woman identified as Jane Doe sued the Juneau diocese in 2009, alleging Gutierrez molested her when she was in elementary school. The lawsuit was dismissed because the statute-of-limitations expired, according to the woman’s attorney.

• Patrick Hurley, a priest who was accused of sexual misconduct involving minors in the mid-1980s. The report says Hurley returned to his religious order in 1985.

• Frederick Faehsler, a religious brother, was accused of sexual misconduct involving a minor between 1988 and 1993. He returned to his religious order in 1993.

The Archdiocese of Anchorage is conducting an ongoing sexual misconduct review going back five decades.